You are here: Home / Diversity / Pay Gaps #2 – 1 in 10 organisations have published incorrect gender pay gap data. Are you one of them?

The first round of gender pay gap data is now available for all organisations employing more than 250 employees.  The UK now faces the challenge of interpreting this data and using it properly which will not be easy given “the 7 ways to misuse gender pay gap data” I recently wrote about.  In the short term, there is an immediate need to resolve errors in the data published and I will demonstrate that potentially 10-15% of organisations have entered incorrect data into the government’s database.

I have downloaded the gender pay gap data for all 10,504 organisations who have submitted their results.  My analysis of this data has uncovered 3 distinct type of errors.

I will explore each in turn and explain how the government should have prevented these errors through simple sanity check code on their website.

The following two companies say their gender pay gap is greater than 100%.  This is mathematically impossible.

In the two examples above, gender pay gaps of 121% and 320% were recorded.  Since the convention is that a positive number means that median man earns more than the median woman, this means the median woman is earning 121% LESS than the median man in the first chart and 320% less in the second chart.  But the maximum positive value the median gender pay gap can be has to be less than 100% i.e. a situation where woman are paid nothing which obviously cannot happen.  So what has gone wrong here?

All companies have the option of uploading their own report to the government database.  Partnering Health Ltd chose not to do so but Shrewsbury Academies Trust did so and they have reported the same number.  At this point in time, I cannot work out what error they made so they need to look at this again.  It is possible they have made a variant on Error 3 described below.

When the median woman earns more than the median man, then it is possible for the gender pay gap to exceed 100% but in the negative direction according to the con 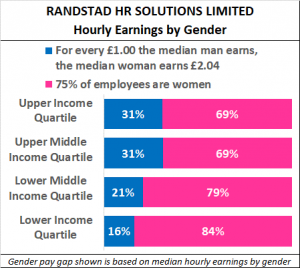 vention.  An example is Randstad HR as shown.  I found this company by looking at who was paying women the most relative to men and at first I was curious why Randstad should be so favourable to women.  Then I noticed a variant of Error 3 below had occurred and clicked on their own analysis of their gender pay gap.  If you read this you will see that they are in fact reporting a gender pay gap of 18% not -104% as claimed by the chart.  I am not sure how this error has been made but again any claim to pay woman twice as much as men should be challenged by the government’s website if someone enters such data.  Randstad in fact are not the largest such claimant.  That distinction goes to Bar 2010 Ltd though in that instance, the difference is understandable due to the fact the company is practically all male.

How many companies are making errors like these?  The answer is I don’t know but it could be mitigated with better sanity checks on the government website.

In statement 3 of my “7 ways to misuse gender pay gap data” post, I explain the idea of income quartiles whereby the organisation is split into 4 equal sized chunks (known as quartiles) of employees based on their hourly earnings (including bonuses) and then within each quartile, the gender split between men and women is recorded.  I stated in my other post that it is the quartile data that potentially offers the greatest value to understanding why women are paid less than men overall but it also offers a straightforward sanity check on the median gender pay gap.

I will use Worcestershire County Council as my example here. 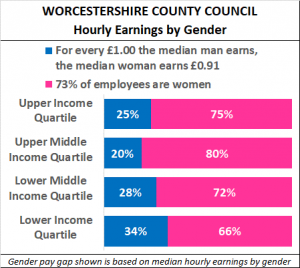 Their median gender pay gap is completely in line with the national median of 9%.  Yet based on the quartile data submitted, it is possible they have made a mistake and should have submitted -9% i.e. woman paid more than men.  A little thought as I will explain shows why.

Suppose exactly 400 people work for the council.  When these people are allocated to income quartiles, each quartile will have exactly 100 people.  Then within the lowest income quartile, according to the chart, 66 are woman and 34 are men.  Conversely, in the upper quartile, 75 are woman and 25 are men.  If you add up the number of woman and men in the council as implied by the chart, you will see that there are 293 women and 107 men working for the council.

Something is clearly not right here.  Either the median gender pay gap is incorrect or more likely, the gender splits by income quartile have been entered in the government database the wrong way round.  According to the chart, 75-80% of the higher paid roles (presumably managers and directors) are women whereas 65-70% of lower paid roles (presumably front line staff) are women.  It is a truism that senior roles are more likely to be men and even though this is a public sector organisation which tends to be more aware of gender gaps than the private sector, I suspect this data has been entered the wrong way around in this instance.  A week ago, when I was working with an earlier version of the database, I noticed that Arriva Plc had made this mistake since the database figures were the reverse of what was published in their own report but they spotted this themselves and the latest version of the database shows the correct figures.

Such errors can be captured by coding the thought process I describe above and prompting the person who is entering the data to check their data if this situation occurs.  It is not difficult to work out that if a company is reporting a POSITIVE median (not mean) gender pay gap then this must imply that the sum of male %’s in the upper income & upper middle in 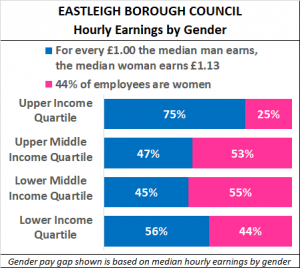 come quartiles should be HIGHER than the sum of the male %’s in the lower middle and lower income quartiles.  So in the case of Worcs CC, since they claim a gender pay gap of +9% then the inequality 25%+20% > 28%+34% must be true but it isn’t in this case.  Conversely if an organisation claims a negative gender pay gap of -13% such as Eastleigh Borough Council, then the inequality of 75%+47% < 45% + 56% should be true but it clearly isn’t in this case.  Following up through Eastleigh’s own report shows that the reason for this error is that they do not understand what a quartile is and therefore their calculations are completely wrong.

The sanity check I explain in error 2 can be coded as follows.

If these sanity checks are violated the data published is wrong and an error has been made somewhere.  But what about companies that claim a median gender pay gap of zero?  937 of the 10,504 organisations claim the median man is paid the same as the median woman.  Based on the sanity check, it should be obvious that this can only be correct if the male quartile gap is zero and only 48 of the 937 organisations meet this criteria.

In addition to these three clubs, I saw the same error with Millwall, Notts County, Wigan, Rangers, Hearts and Leicester City.

Why has this happened?  As we saw for Eastleigh Borough Council, they might simply not know how to do the calculations properly.  I therefore decided to read the government guidance on how to calculate the median (and the quartiles) and I was shocked by what I saw.  Here I quote the calculation of the median in red italics:-

Median gender pay gap in hourly pay: how to calculate

By the way, the ACAS guide is no better and makes the same mistake regarding the median.

The information on calculating quartiles starts off OK but then gets into a muddle when dealing with numbers that don’t divide evenly into 4 whole numbers.  However, for many people who think they know that the median is the middle of the range rather than the line, I would not be at all surprised if they then think that quartiles is just the range divided into 4 equal sized chunks e.g. £10-30, £30-50, £50-70 & £70-90 which of course it isn’t.

How many organisations are making errors?

Error type 1 can still occur and not create a conflict between the reported median gender pay gap and the calculated male quartile gap so the true error rate may yet be higher.  I urge the government to revamp its database and include sanity checks as described in this post as soon as possible.  At the same time, their guidance on calculating the median and quartiles must be rewritten by a statistician!

"I mentioned it once but I think I got away with it!" Basil Fawlty didn't get away with it in … END_OF_DOCUMENT_TOKEN_TO_BE_REPLACED

May 2022 was the 5th warmest May on record in the UK.  Whilst temperatures are rising as the days … END_OF_DOCUMENT_TOKEN_TO_BE_REPLACED

Whilst COVID19 was ravaging the world in 2020 & 2021, I felt there was little point in updating … END_OF_DOCUMENT_TOKEN_TO_BE_REPLACED