Originally published on 19th February. Please scroll to the bottom for an updated forecast as of 22nd February.

The Conservatives are well set to take Copeland from Labour.  That is my forecast after running my by-election model on Copeland.  According to Matt Singh of NCP Politics, the last comparable by-election would be in 1878!  For more details about my methodology, please read how I forecast by-elections in the Brexit era.

As always, we need to start with a breakdown of the 2015 General Election results when Labour held the seat with a 6% majority and the 2016 EU referendum result where I estimate that Leave won with 61% of the vote. 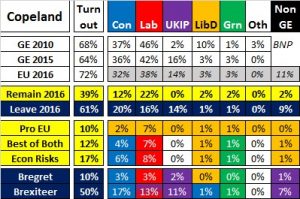 segmentation based on the Ashcroft “exit poll” shows Brexiteers account for 50% of all voters in 2016 but the majority of Labour voters were Remainers.  This perfectly encapsulates the dilemma for Labour in the North of England.  Do they double down on opposing Brexit and bring in additional Remainers to replace the Leavers they will lose or do they accept Brexit so as to hold to their Leavers and attempt to capture other Leavers who may have voted for them in the past?

For the other parties, their strategies are clear.  The Lib Dems will oppose Brexit and appeal to other Remainers using the success of Richmond Park as a springboard.  UKIP will try and make inroads in Labour Leavers.  For the Conservatives, they do not have as many Remainers to lose in the first place, especially the committed ones, so they can continue the path they are following and seek to attract other Leavers from other parties.

As I have stated before, the following voter dynamics are already apparent from the 3 contested by elections we have had since the referendum.

The question now is which dynamics will be at play in Copeland and are there other dynamics that could come into play?  To answer the second question, there is one dynamic that is of great interest in both Copeland and the Stoke-on-Trent Central by-election which is taking place the same day and that is whether Labour Leave voters will defect to UKIP.  Therefore in my scenarios I have added a 7th dynamic as follows.

Not seen in 3 contested by-elections since Referendum

For some of the 7 dynamics I have allowed for a number of variants such as: 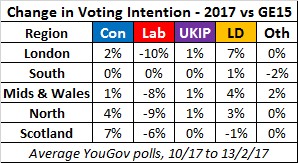 The national swing away from Labour is a hard one to get a handle on as from what I see in opinion polls there are considerable regional variations.  By taking the average of YouGov’s 4 polls between 10th January & 13th February, I have calculated the following swings from Labour since the 2015 General Election as shown in the table.

So I am now ready to run numerous scenarios based on various combinations of the 7 dynamics described and summarise the results.  In total, I ran 528 scenarios broken down into 3 broad groups as listed in this table.

The 3 groups of scenarios are: 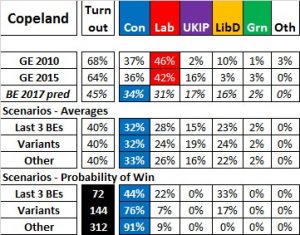 The table shows the average vote shares across the multiple scenarios and you can see that the Conservatives top all 3 groups.  But for me the more interesting figures are the % of scenarios where each party wins.  These show a clear pattern.

Having run all the scenarios, I have decided to stick my neck out and choose one scenario as my forecast which is shown in the 3rd row of table and shows a Conservative win by 3%.  This is based on the following assumptions.

Straightaway, you should be able to see that the last assumption is critical to the Conservatives winning under this scenario.  If Labour can buck the national swing then they can hold onto Copeland but if not, the Conservatives will be celebrating a major electoral feat.

After I published this post, I was analysing some polls by YouGov and I came to the conclusion that there is an 8th dynamic that was present in both the Richmond Park and Sleaford by-elections.

This is not a large effect but I think it needs to be incorporated in my scenarios. 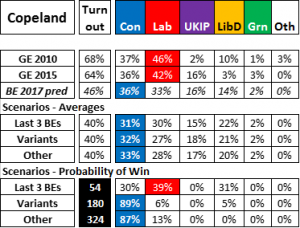 At the same time, I noticed that some scenarios that favour the Lib Dems had inadvertently been double counted and I eliminated my most extreme scenario in terms of additional national swing from Labour.  After rerunning the numbers, the revised forecast is now shown in this table.

However, once you start considering Variants and Other scenarios, the odds shift markedly in favour of the Conservatives.

My chosen scenario is one that is similar what happened in Sleaford.

After an entire meteorological year where the temperature above the median for ever single month, … END_OF_DOCUMENT_TOKEN_TO_BE_REPLACED

Sir Donald Bradman is the GOAT (Greatest of All Time) of sporting GOATs.  All cricket lovers accept … END_OF_DOCUMENT_TOKEN_TO_BE_REPLACED