You are here: Home / Elections / By-Elections #1 – How to predict outcomes in the Brexit era

The first two rows show the general election results & turnout for 2010 & 2015.  The EU 2016 row shows the actual turnout in Witney was 7 points higher than the General Election in 2015 which tells us there were people who voted in 2016 but not in 2015.  I have recast the 2015 results into what would have been the vote shares had these additional voters been able to tick a box in 2015 which said “None of the above but I will vote in the referendum in 2016” as shown by the Non-GE black column.

This is important to do because in any future election or by-election, these Non-GE voters may be inspired to vote having not done so in 2015.  For the sake of completeness, I have assumed that if people did not vote in either the referendum or the General Election then they will never vote in any future by election.

We then have the Remain & Leave vote shares of 54% & 46% respectively in the next two rows.  In the case of Witney, these are actual results since the results were declared for West Oxon district council which happens to be the same geographical area as the Witney seat.  We now have actual data for 172 of the 650 seats in the UK and so for some by-elections, I do not need to estimate these figures but for most by-elections I will use my Leave vote share model to make these estimates.

I have split the Leave & Remain votes by political party in 2015 including the Non-GE voters.  So of the 55% (after allowing for Non-GE voters) who voted Conservative in 2015, I estimate a small majority voted Remain with a 28:27 split.  These splits are derived from the Ashcroft “exit poll” where he found that Conservative voters split 58:42 Leave in the referendum based on the UK result of 52:48 Leave.  Using those party splits as a starting point, I have then adjusted the proportions equally across all parties until I end up with numbers that reconcile with the known 54:46 remain vote in Witney.

The question for any by-election in the post-Brexit era is how will these voting segments behave in any future election?  Will Conservative Remainers switch to the Lib Dems?  Will Lib Dem Leavers switch to the Conservatives?  I am sure you can imagine many possible scenarios and there is a danger that you end up picking scenarios that fit your narrative.  To avoid this bias and add some rigour, I paid particular attention to question 24 of the Ashcroft “exit poll” and my interpretation of this question was that Leave & Remain voters can be split into 5 Voter Segme 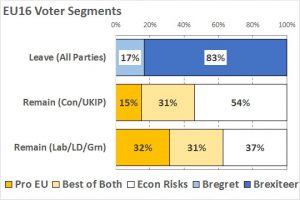 nts within each party.

The chart shows the size of each segment based on my reading of the Ashcroft “exit poll”. Note the Economic Risks segment is larger and the Pro-EU segment is smaller among Conservative Remainers compared to L 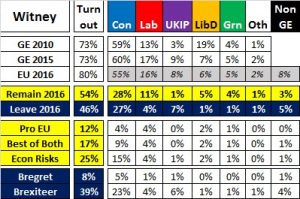 Using this chart I can allocate each parties’ remain and leave voters into the 5 referendum segments which results in additional rows to the table I have already shown.  For Non-GE voters, there is a clear correlation between Leave voting and increased turnout so these voters are assumed to be disproportionately Leave.

The end result is that I have now split Witney into 35 voting segments.  A number of these are tiny such as UKIP Remainers (almost an oxymoron!) but doing this allows me to identify the largest segments which are likely to be key in any by-election.  In Witney, the largest segment is Conservative Brexiteer which accounts 23% of 2016 voters followed by Conservative Economic Risks with 15%.

To arrive at a forecast for a by-election we have to answer these questions.

By now, I am sure you will be thinking that you could come up with pretty much any figure you want and you would be right to say so.  So the way to get around any potential cherry picking, I have devised hundreds of potential scenarios (528 to be precise) and by examining the distribution of outcomes generated by these scenarios, I can draw conclusions.  For example, if all scenarios point to a Conservative win say, then it doesn’t matter too much scenario is the correct one.  Alternatively, you may find half the scenarios point to a Labour win and the other half point to a UKIP.  At that point, you can seek to identify what are the common factors behind Labour victories, what are the common factors behind UKIP victories and then compare and contrast the specific factors that drive the differing outcomes.  With this information, you can then choose to give more weight to some factors than others if you think that is worth doing.

For by elections that have already taken place, my approach is different.  This time, I want to identify the scenarios that best explain the actual results.  With 3 by-elections, this gives me the chance to see if there is any consistency in the best fit scenarios that could be used to predict future by-elections.  It turns out that there is some consistency. 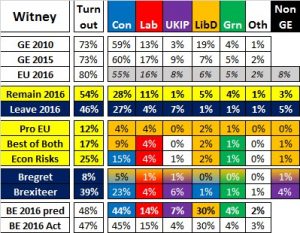 I have colour coded each of the 35 voting segments to indicate where I think the votes went and the following scenario generates a forecast close to the final result.  All is consistent with my reading of the political mood at the time.

This scenario does tend to overestimate the UKIP vote but since UKIP got less than 10% of the vote in 2015, I am not so bothered about getting the smaller parties correct.  The main thing is to find the scenarios that best fit the larger parties. 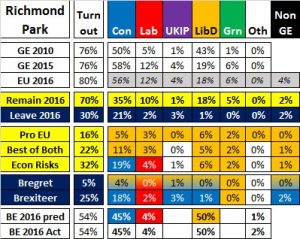 In this by-election, Zac Goldsmith actually stood as an independent Conservative candidate.  Both UKIP and the Greens decided not to stand.  Richmond Park was one of the strongest Remain seats in the country coming in at #36 out of 650.  Among Conservative seats it was the 4th most Remain seat with the other 3 also in South West London.

By now, the political mood had started to change following the strong showing by the Lib Dems in Witney and so the following scenarios appear to be consistent with my perceptions at the time.  Those statements coloured in blue bold also apply to Witney, other statements differ from Witney.

So in two Conservative Remain seats in the London/South East area, some similarity of scenarios is now apparent. 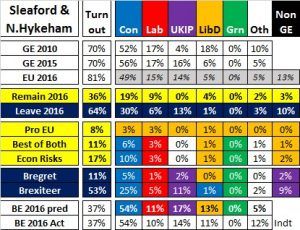 This by-election was the first since the referendum to take place in a Leave seat.  Compared to Richmond Park though, turnout was considerably lower and an Independent candidate made a strong showing.  This time, the following scenarios apply with those in blue common to both Richmond Park & Witney and those in red common to Richmond Park.

Two assumptions do now seem to be solid ones, namely that all Pro-EU voters have swung behind the Lib Dems but the Lib Dems have lost their Brexiteers to the Conservatives.  Six weeks on from Witney, it now appears that Non-GE voters are starting to turn out to some degree and that there is a small national swing away from Labour that needs to be taken into account.  Going forward, my by-election forecasts will tend to favour these scenarios.

After an entire meteorological year where the temperature above the median for ever single month, … END_OF_DOCUMENT_TOKEN_TO_BE_REPLACED

Sir Donald Bradman is the GOAT (Greatest of All Time) of sporting GOATs.  All cricket lovers accept … END_OF_DOCUMENT_TOKEN_TO_BE_REPLACED