In many countries across the world, the total effect of the Coronavirus pandemic is now being measured using the concept of Excess Deaths.  However, publication of such data by the Office of National Statistics for England is up to 2 weeks slower than the daily deaths published by Public Health England.  In this post, I update my model which uses the PHE series to estimate what the ONS will publish for excess deaths in England on Tuesday 9th June. 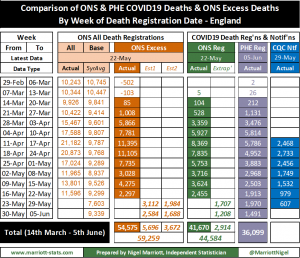 There were 2,297 excess deaths in England in the week ending 22nd May.  This was 1000 lower than my estimate which was based on a new method described in that post and again in this post.  I have said before I would prefer to be overestimating than underestimating and the error is within the 95% confidence interval but I would like to be more accurate going forward. 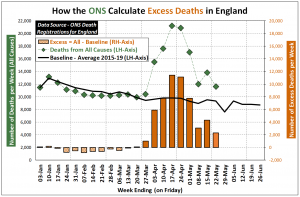 Until 2 weeks ago, my model was based on the ratio of ONSx to PHEr by day.  I plotted these ratios by week as shown in the chart and then attempted to identify the appropriate average for each day of the week based initially on best guesses but then supplemented by published CQCn data (plotted below).  The reason I initially did it this way was sample size.  By taking daily data I could increase the sample size.   If I were to stick with this model, my estimate of the average ratio is shown by the black line and this gives EST1 in the table at the beginning which shows 3122 deaths for week ending 29th May and 2584 deaths for week ending 5th June.  I consider both of these to be overestimates but I am including them for completeness. 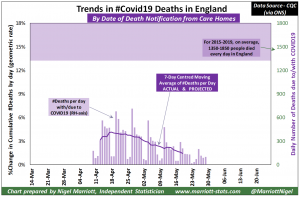 By now though, we have 9 weeks of data with significant excess deaths plus of couple weeks beforehand when the first COVID19 deaths were recorded.  I think that is enough to start building a model with weekly data only.  One change I made straightaway was to change the output variable.  Currently it is 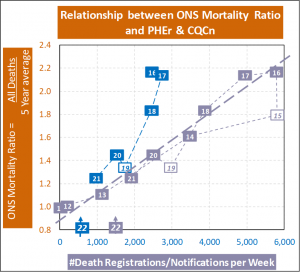 as the labels and the most recent week ending 22nd May is week 21 and we are trying to predict ONSm for week 22.  Since we already know what PHEr & CQCn are for week 22, we can show these values on the horizontal scale.  The labels with white backgrounds (weeks 15 & 19) had Friday bank holidays (Good Friday & VE Day respectively).  The reason I highlight this is because PHEr and ONSm are based on death registrations and bank holidays result in reduced staffing levels for compiling the data and thus artificially lower death counts.  In contrast, I believe the effect of Monday bank holidays is more limited since staff have the rest of the week to catch up.

**IMPORTANT – PHE made a change in the way they record deaths in the week ending 29th May as described in this post.  For the purposes of using the model shown in the chart here, I had to rescale the PHE numbers to the old method.  Next week, I will be able to include an explicit adjustment factor for this in my model. 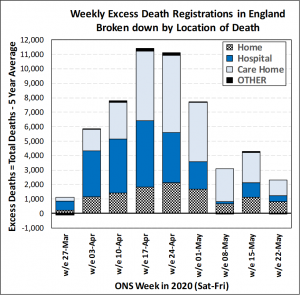 shown in the chart here.  Over the 5 weeks to 29th May, deaths in care homes have been larger than in hospitals and is now the main driver of excess deaths.  If I build a separate model for the blue labels on the scatter plot, I get an estimate for ONSm of 1.14 which converts to an estimate for ONSx of 1269.

UK Inflation has risen sharply since the start of 2022 and dominates the media and politics today.  … END_OF_DOCUMENT_TOKEN_TO_BE_REPLACED

Rishi Sunak is the UK's first Prime Minister from a non-white ethnic minority. Did this happen by … END_OF_DOCUMENT_TOKEN_TO_BE_REPLACED

The weather in the UK for October was warmer and sunnier than normal.  Overall we are heading for … END_OF_DOCUMENT_TOKEN_TO_BE_REPLACED

The weather in the UK for September was unremarkable.  Perhaps that is a welcome change after the … END_OF_DOCUMENT_TOKEN_TO_BE_REPLACED

The 2022/23 Women's Super League (WSL) kicks off this weekend in England.  After the Lionesses … END_OF_DOCUMENT_TOKEN_TO_BE_REPLACED