You are here: Home / Diversity / Pay Gaps #25A – House of Common’s debate on Ethnicity Pay Gaps – My thoughts

The UK Parliament debated Ethnicity Pay Gap Reporting (EPGR) on 20th September 2021 in Westminster Hall.  Seven MPs spoke in the hour long debate and, as debates go, I thought it was actually quite good.  There was cross party consensus on the merits of EPGR but I saw a divide between those who recognise EPGR is complex and requires trade offs and those who think the complexities of EPGR can be solved with government guidance.

Links to the debate and supporting material

In addition, I live tweeted during the debate and posted my initial thoughts on LinkedIn which are expanded on in this blog.

The debate – what did MPs say?

7 MPs spoke in the order shown.  The debate was chaired by Stuart Hosie (SNP), MP for Dundee East.

The transcript (link 6 above) records what each MP said in full but here is a graphic showing which MPs made points relevant to the statistical and data issues I have written about in my blogs. 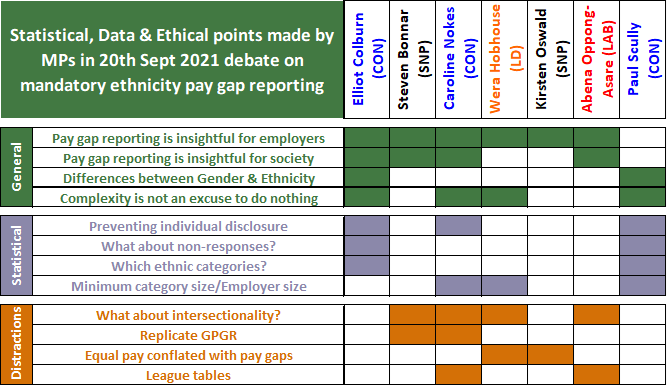 Elliot Colburn opened the debate by thanking me for my 9-point briefing note (time stamp 16:31:55 of the Parliament TV link above).  I think that is the first time my name has been mentioned in parliament!  Indeed, Elliot spent a large chunk of his time highlighting my 9 points from time stamp 16:34:30 which concluded with this passage that echoed the tone of my briefing note –

“… these are not arguments against ethnicity pay gap reporting, but it is important to raise these problems here and consider how we can overcome them in order to bring forward proposals.”

My graphic above shows there was cross party recognition that ethnicity is different from gender.  Nearly all MPs stated why pay gap reporting can be insightful for employers, government and society and I thought Abena Oppong-Asare expressed this point best with this paragraph –

“Company-specific reporting is important, because it obliges employers to examine their data and to work out why disparities might exist. It does not assume that discrimination takes place, but rather provides information so that employers can make informed decisions to improve recruitment, promotion and pay policies. Without it, we will not be able to see what progress has already been made and where there is more to do.”

I was disappointed to see only Conservative MPs were prepared to talk about the How of EPGR which I had hoped would be a bigger part of the debate.  I also found some of the points made distracting or unhelpful.  I will discuss intersectionality further below since it intersects(!) with the sample size issue that is the bane of EPGR but the other 3 distractions I’ve listed were all addressed in my 9-point briefing note in link 4 above.

More than anything, MPs wanted to know if the government intended to bring forward proposals and if so when.  Ahead of the debate, I noted the correspondence between Paul Scully and the e-petition committee which can be seen in link 3 above and this stated the government did not expect to be ready with proposals now.  Paul Scully covered a lot of the statistical issues occupying BEIS at present and also spent a long time recounting the history up to the present day.  In doing so, he may have distracted MPs to the extent they may not have taken note of the following paragraph (I myself didn’t notice until I read the transcript) –

“We are committed to taking action on ethnicity pay reporting, but we want to ensure we are doing the right things to genuinely help move things forward. Determining what it makes sense to report on and what use that data may be put to is key. It is far from straightforward.”

My meetings ahead of the debate

My perspective on the debate is influenced by the fact I have had a number of meetings with parliamentarians, ministers, special advisors and civil servants over the last 12 months to discuss how EPGR could be introduced in the UK.  I do not intend to share details about what was said in those meetings but for the record, here are the meetings I have had.

My 1st meeting with Kemi came about when she contacted me having seen my appearance at Treasury Committee on the effectiveness of pay gap reporting.  She also initiated the 2nd meeting in April whilst the 3rd meeting was at my request.  I believe cross party consensus on EPGR is worth pursuing so following my 1st meeting with Kemi, I approached Kemi’s shadows in Labour, Liberal Democrats and the SNP.  Marsha & Wera were kind enough to grant me some time for a meeting but I received no response from the SNP.  I approached both Marsha & Wera again ahead of the debate and I received no reply from Wera whilst Marsha resigned her position the day after my email.

I also emailed my 9-point briefing note to Elliot Colburn who opened the debate and the House of Commons Research Library ahead of the debate.

My thoughts on the debate

What Paul Scully said in the debate as quoted earlier is completely consistent with what I have heard in my various meetings with the minister, civil servants and special advisors.  I believe the government intends to bring forward proposals but they are still struggling to decide which trade-offs (repeatedly highlighted in my blogs) should be made.  The other 2 Conservative MPs also noted that trade-offs have to be made so why did none of the opposition MPs acknowledge that trade-offs are needed and put forward their opinions of what they should be?

“That is something I have heard in this debate, but leading experts in this field—including the Chartered Management Institute and the Chartered Institute of Personnel and Development—have set out practical ways to overcome it. Other concerns, such as the legal basis for collecting ethnicity information or low declaration rates, can simply be overcome with clear guidance from Government. Those practical issues are what the Government have been working on over the past two years, so the information is there for us to be able to do this, rather than kicking the issue into the long grass.”

I think Abena was misinformed regarding the CIPD being a leading expert in the field of EPGR.  I have read that report and unfortunately it was a waste of time since nowhere in its 39 pages does it talk about how employers can draw conclusions from small sample sizes.  Any guidance to employers has to start by addressing this issue since I’ve estimated at least 70% of employers who currently report gender pay gaps will face this issue.  You only have to look at the ethnicity profile below of an employer with 1,000 employees who exactly matches the 2011 Census for England to see how small some sample sizes are.  This is why I found the comments made in the debate regarding intersectionality unhelpful since the moment you look at the interaction between gender and ethnicity of an employer as below, the sample size issue is only going to get worse.  I don’t doubt the value of intersectional analysis but until agreement is reached on what the minimum size of any category to be reported in an EPGR system should be, it’s premature to be looking at that level of detail. 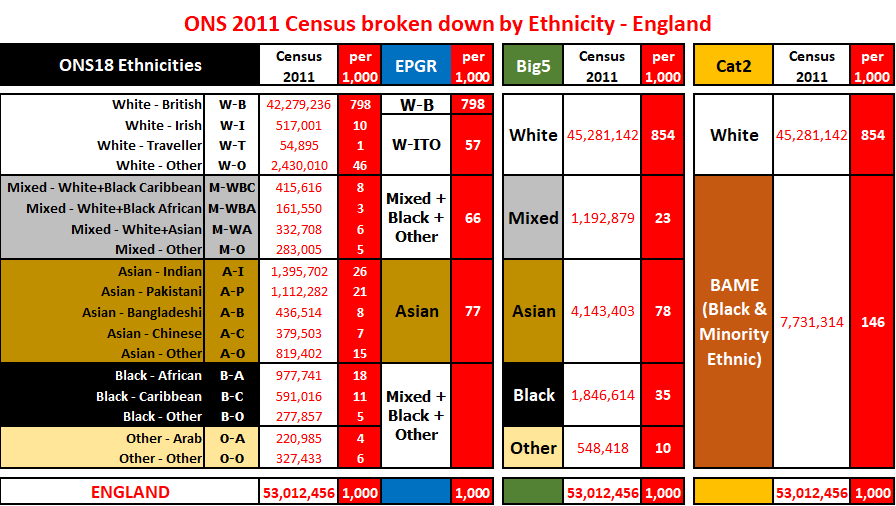 I have no doubt that Abena is sincere in believing that all issues can be simply resolved with government guidance as she stated and I dare say she, along with the other MPs, are perplexed as to why the government appears to be dragging its feet.  Unfortunately no such “magic potion” exists and I intend to seek a meeting with Abena to try and get to the bottom of why she made this statement and see if I can help her to understand the statistical & data issues.

This was the greatest value of the debate for me i.e. seeing more clearly the divide between those who understand why trade offs are necessary and those that don’t.  Over the next few months, I will spend more time explaining why trade offs are necessary in blog posts and elsewhere.  If you subscribe to my newsletter (link at the end of this article) you can be notified when these are published

For now, I want to try and convey how large any possible statistical guidance would have to be for an employer who is trying to interpret their diversity data which includes categories of less than 50 employees.  The challenges of interpreting small sample sizes is the same in every single aspect of the economy and society at large and has occupied professional statisticians for over a century and still occupies us to this day.  This is what I am trained to do as a professional statistician and the particular expertise I bring to this challenge is that I have 30 years experience of helping non-statisticians to solve small sample size problems.

In one of my answers to the Treasury Committee in 2019, I noted that gender pay gap reporting required HR professionals to become statisticians.   For ethnicity pay gap reporting using small sample sizes, they need to become professional statisticians and this is not an exaggeration.  I’ve listed a number of statistical methods below in order of increasing difficulty that anyone undertaking a degree level statistics course would have to learn.  These methods are directly applicable to particular types of diversity analysis and in effect are the type of analyses that an HR professional would have to do in order to write an ethnicity pay gap narrative when confronted with small sample sizes.  I’m not expecting you to understand what these methods are (you can book a place on my statistical inference course if you would like to know!), what I am trying to point out is how long any government guidance aimed at a non-statistician would have to be if it were written and the level of detail involved.  The hyperlinks included give you a flavour of what’s involved.

Head spinning by now?  Meet me instead!

I finish with a public offer to meet & discuss the complexities of EPGR and the possible trade offs to anyone who is interested.  For those who are not interested in understanding the statistical complexities involved with EPGR, I will continue to publicly challenge & criticise you if you think a magic potion called “government guidance” can solve the statistical & data issues involved or if you think HR professionals are more than capable of solving statistical challenges that have challenged professional statisticians for over a century and continue to do so today.  Any campaigner who chooses to confront the trade offs and put forward their proposed trade off will receive my enthusiastic support so please do contact me with your proposals.

December marks the start of the 2022 meteorological year and it was very grey, dull and boring. … END_OF_DOCUMENT_TOKEN_TO_BE_REPLACED

Will there be any football this Christmas?  The Omicron variant of COVID19 is wreaking havoc with … END_OF_DOCUMENT_TOKEN_TO_BE_REPLACED