As I write this, a plethora of economic forecasts are making the rounds in the news in the UK.  In all cases, the forecasters have failed to publish their track record and these days, I will not pay attention to what they say unless their forecasts are accompanied by a track record.  But, how does one go about presenting a forecasting track record to prove that one has forecasting skill?  To demonstrate, I will analyse how well opinion polls have predicted General Elections in the UK and measure their track record.  I must confess I was surprised at what I found out and I would urge all opinion pollsters to take note of my results.

I first talked about the need for transparent, publicly available, track records for forecasters early last year in my article “how do you identify a good forecaster“.  When I published my 2017 UK General Election forecast I thought I should practice what I preach and I produced a simple election forecasting track record for myself at the start of that youtube clip.  However, it was not a track record that was traceable i.e. you could not go back and verify what I had forecast but from 2017, all of my forecasts (via my blog) have been traceable.  Should there be another election in the near future, I will ensure my track record is easily available on my blog and contains links to specific forecasts for traceability purposes.

However, publishing my track record tells you nothing about whether I actually have forecasting skill.  To do that, I have to show that my forecasts are more accurate than what I call a dumb or naive forecast.  As I explained in my forecasting article last year, the three simplest dumb forecasts are:-

ARMA stands for Auto Regressive Moving Average, a staple of basic time series analysis.  In this post, I am going to compare the predictions of the UK Opinion Pollsters (POLLS) with the ARMA dumb forecast for UK General Elections from 1951 to 2017.

First I have to decide what is the specific forecast to be compared?  I have chosen to use the Conservative lead over Labour in vote share for Great Britain as I have stated on previous occasions that this is the key statistic when predicting the number of seats each party will win in an election using the First Past The Post system.  Nearly all opinion polls only cover Great Britain and exclude Northern Ireland so the CON-LAB lead statistic has to be for GB only. 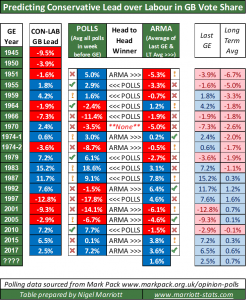 For each forecast, I have used 3 symbols to denote its accuracy as follows :-

Who wins? POLLS or ARMA?

So do these figures show forecasting skill for POLLS?  What struck me immediately was the head to head battle where the score is a narrow 9-8 win (with 1 draw) for POLLS.  Given that ARMA is a dumb forecast which can be made anytime immediately after an election and POLLS in theory are supposed to be capturing what we are thinking today, such a narrow win is somewhat surprising.  This is especially surprising given that ARMA cannot really forecast landslides given the nature of how it is calculated.  ARMA largest forecast is +7.8% in 1987 (Thatcher’s landslide) whilst POLLS largest forecast was -17.8% in 1997 (Blair’s landslide). 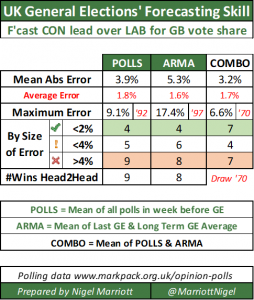 Of course, what should be clear is that when ARMA loses, it can lose very big indeed such as ’97.  So we have two potential ways to evaluate forecasting skill, either measure how often the forecast is a winner or measure the extent of its defeats.  The next table show statistics for both ARMA and POLLS.  The first statistic shown is the Mean Absolute Error (MAE) which is the average of the forecast errors ignoring the sign.  The dumb forecast ARMA has an MAE of 5.3% so for true forecasting skill, POLLS needs to be below that which is the case with an MAE of 3.9%.  However, I have shown that the number of seats that each party wins can change notably with a 4% error leading to election outcomes that are surprises.  I would argue that POLLS need to be doing better than this.

The breakdown by error size is not much comfort to POLLS.  Based on number of elections where the error was less than 4%, ARMA in fact wins 10-9.  Again it is clear that when ARMA is wrong it is massively wrong whereas POLLS are not as wrong.  The table shows the largest error by POLLS was half that of ARMA.

COMBO is not the best option if your goal is to maximise the number of wins.  By its nature, COMBO is in between POLLS and ARMA and if both point to the same party coming top then one of those two will be the winner and not COMBO.  COMBO will only have a chance of winning in elections where POLLS and ARMA disagree as to which party will top the poll.  There have been 5 such elections (’64, ’79. ’92, ’97 and ’10) and COMBO wins 4 of those (all but ’97).  In the other 13 elections, POLLS win 8-4 (+ 1 draw).  So this suggests a clear strategy for trying to pick winners, use POLLS unless ARMA disagrees in which case use COMBO.

A final point to note is that all three forecasting methods have similar average errors i.e. on average they underestimate the CON-LAB lead by 1.7% or so.  I have written about this before when it comes to the polls but it is surprising to see the same thing for ARMA.  At first, this suggests that a correction should be applied to all ARMA forecasts but when I do this, the MAE falls slightly but the other statistics don’t change so I would not recommend that approach without more thought.

UK Inflation has risen sharply since the start of 2022 and dominates the media and politics today.  … END_OF_DOCUMENT_TOKEN_TO_BE_REPLACED

Rishi Sunak is the UK's first Prime Minister from a non-white ethnic minority. Did this happen by … END_OF_DOCUMENT_TOKEN_TO_BE_REPLACED

The weather in the UK for October was warmer and sunnier than normal.  Overall we are heading for … END_OF_DOCUMENT_TOKEN_TO_BE_REPLACED

The weather in the UK for September was unremarkable.  Perhaps that is a welcome change after the … END_OF_DOCUMENT_TOKEN_TO_BE_REPLACED

The 2022/23 Women's Super League (WSL) kicks off this weekend in England.  After the Lionesses … END_OF_DOCUMENT_TOKEN_TO_BE_REPLACED