April 2019 is bang in the middle of gender pay gap season as everyone digests the 2018 snapshot data uploaded by over 10,500 organisations in the UK employing more than 250 employees.  Due to my work on pay gaps, I am being asked a number of questions and what is gender pay gap data and how it can be interpreted.  As more questions come in, I will update this post so please bookmark this for future reference and follow me on Twitter for alerts as to when this has happened.

The questions I have been asked are below.  Please scroll down to the relevant section to find my answer.

Q1: Where can I find gender pay gap data for a particular organisation?

There are 3 good sources you can use and you can find links to all three in my post “Where I can find Gender Pay Gap data?”

Q2: Do organisations who submit their data near or after the deadline have larger pay gaps than those that submit early? 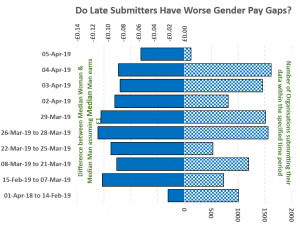 The short answer is no as can be seen in this chart.  The only apparent effect is that up to 15th February, the median of the median gender pay gaps was near zero implying that the first 10% of submitters were better than the subsequent 90% who did not vary by submission date.

Q3: Why are gender pay gaps published by the Office of National Statistics different to what is submitted by the 10K+ organisations?

There are two reasons why there is an 8p difference between the two figures.  The first is that they are measuring different things.

The second reason is to do with breakdowns offered by the dataset.

Since GPG submissions is already broken down by organisation, it is not possible to “unbreak it”to get an equivalent national figure.  All we can do is average across organisations which is not the same thing.

Whilst the ONS reports its national figure, it’s recommendation though is to look at its breakdowns instead starting with the full time employees which currently has a 9p gap virtually the same as GPG submissions.

The bottom line is that the two figures are not really measuring the same thing but when you get under it, they are probably not contradicting each other.

"I mentioned it once but I think I got away with it!" Basil Fawlty didn't get away with it in … END_OF_DOCUMENT_TOKEN_TO_BE_REPLACED

May 2022 was the 5th warmest May on record in the UK.  Whilst temperatures are rising as the days … END_OF_DOCUMENT_TOKEN_TO_BE_REPLACED

Whilst COVID19 was ravaging the world in 2020 & 2021, I felt there was little point in updating … END_OF_DOCUMENT_TOKEN_TO_BE_REPLACED