You are here: Home / Archives for Brexit

At 2200 on Thursday 12th December 2019, the BBC/ITV/Sky Exit Poll was revealed to the nation and pointed to a large majority for the Conservatives.  Unlike 2017, I was able to turn to my wife and say “it looks like I will be right this time!”  By the end of the night, Gavin Freeguard from the Institute of Government was tweeting that not only was I the most accurate election forecaster of 2019, I was more accurate than the Exit Poll.

END_OF_DOCUMENT_TOKEN_TO_BE_REPLACED

My forecast for the 2019 UK General Election this Thursday is that the Conservatives will win a majority of 72 seats.  The margin of error in this forecast is very wide though due to the fact that 5 of of the last 7 general elections have seen a major polling error.  If there is a repeat of the GE2017 underestimate of Labour, then there will be another hung Parliament.

END_OF_DOCUMENT_TOKEN_TO_BE_REPLACED

Theresa May has just asked the EU Council for a 3 month extension to Article 50, the Speaker won’t allow another meaningful vote without meaningful changes, Jeremy Corbyn is pondering backing another referendum and in 9 days time, the UK could be leaving the EU without a deal.  Just another week in the Parliamentary Brexit Maze but I have updated my Brexit Voting Factions after last week’s votes and identified an 8th faction for you to play with in your voting permutations.
END_OF_DOCUMENT_TOKEN_TO_BE_REPLACED

*** This post is not yet complete.  However you will find a link to the data near the bottom and a link to a twitter thread for some of the images ***

Within the next 10 days, the House of Commons will get a second Meaningful Vote on the Withdrawal Agreement which could be followed by 2 more significant votes on No-Deal and Article 50 Extension.  I have been tracking how MPs have voted on the first Meaningful Vote and subsequent Amendments which I summarised in two posts “Find your way out of the Brexit Maze in 57 days and 43 days.”  Following further amendments at the end of February and with no more amendments planned before the next meaningful vote, I have redone my cluster analysis to predict what the outcome of these votes might be.  As far as possible, I am trying to base my predictions on what MPs have done rather than what they say but I will compare my analysis with that of Election Maps who have been tracking MP’s statements.
END_OF_DOCUMENT_TOKEN_TO_BE_REPLACED

Rather than celebrating love on Valentine’s day, Parliament chose to use the occasion to emphasise their discord over the EU withdrawal process, 43 days before the UK is due to leave the EU.  Three amendments were voted on and this allows me to update my Brexit voting blocks which I first described in “Find your way out of the Brexit maze in 57 days!”.

This post was updated on 22nd February 2019 to take into account the resignations of 9 MPs from the Labour party. and 3 MPs from the Conservative party.

END_OF_DOCUMENT_TOKEN_TO_BE_REPLACED

January 2019 has been a month of considerable parliamentary drama in the UK as MPs wrestle over whether to approve the Withdrawal Agreement between the UK and the EU.  There is no shortage of political punditry and quotes from politicians and the whole episode is proving to be a classic example of uncertainty.  For statisticians like myself, uncertainty occurs when you cannot properly price the odds of an event happening unlike risk which occurs when you can price the odds.  Since the current state of affairs will ultimately be determined by parliamentary votes one way or the other, is it possible to use parliamentary vote data so far to estimate the odds of certain scenarios?

END_OF_DOCUMENT_TOKEN_TO_BE_REPLACED

The fevered political climate in the UK at the moment is all about Brexit and possible second referendums and general elections.  Jeremy Corbyn made it clear recently that he wanted a General Election now so that he could take over the Brexit negotiations.  With that in mind, I decided to take a look at what Labour’s target seat strategy could look like based on the results of the 2017 general election.  What I see at the moment is that Labour has many ways of becoming the largest party in Parliament but the road to a working majority is much harder than people realise due to the Brexit realignment in 2016 and the Nationalist realignment in Scotland in 2015.

END_OF_DOCUMENT_TOKEN_TO_BE_REPLACED

NOTE 19/2/16: This post is not yet complete.  I will do my best to complete it soon as possible.  Since I started writing this post, additional data has been made available and I now think that 400 out of 650 seats voted Leave.  You can see an outline of my older model in my YouTube clip published in November 2016.

For those used to staying up for election night, the BBC coverage of the EU Referendum on 23rd June 2016 must have been disconcerting. Where were the figures showing how many seats Leave & Remain had won? Unlike a general election where the winner is the party with the largest number of seats, the referendum was decided by a popular vote with Leave winning with 17,410,742 votes to Remain’s 16,141,241 votes.

Also different was that the results were declared for the 399 counting areas (CA) used in EU elections rather than the more familiar 650 parliamentary constituencies. Of the 399 CAs, Leave won a majority in 270 CAs as shown in figure 1. However, the counting areas vary enormously in size from 1,799 eligible voters for the Isles of Scilly to 707,293 eligible voters for the city of Birmingham which makes it difficult to compare CAs. The apparently overwhelming victory for Leave in terms of CAs could be a statistical mirage with Leave winning small CAs and Remain winning large CAs.

END_OF_DOCUMENT_TOKEN_TO_BE_REPLACED 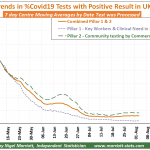 During the first wave of the COVID19 epidemic, the daily number of deaths published by Public Health … END_OF_DOCUMENT_TOKEN_TO_BE_REPLACED

Last updated on 25th July 2020 - future updates will be infrequent. The latest data for deaths … END_OF_DOCUMENT_TOKEN_TO_BE_REPLACED

After the two sunniest months on record, the UK weather returned was reassuringly normal and boring … END_OF_DOCUMENT_TOKEN_TO_BE_REPLACED

In many countries across the world, the total effect of the Coronavirus pandemic is now being … END_OF_DOCUMENT_TOKEN_TO_BE_REPLACED

In many countries across the world, the total effect of the Coronavirus pandemic is now being … END_OF_DOCUMENT_TOKEN_TO_BE_REPLACED

In many countries across the world, the total effect of the Coronavirus pandemic is now being … END_OF_DOCUMENT_TOKEN_TO_BE_REPLACED