UK Inflation has risen sharply since the start of 2022 and dominates the media and politics today.  It is now having knock on effects, most notably on wage rises which are lagging behind inflation.  The aftermath of the COVID19 induced recession continues to be considerable economic uncertainty.

10 Economic Variables for the UK

These are the variables I track for the UK which come in 5 pairs:-

For more information on why I chose to track these statistics, the format of charts I use below and the dark green to dark brown colour coding system, please read my post “UK Economy Tracker Explained“.  You can click on each heading below to be taken to the ONS website where I sourced the data (the 4 letter code denotes which ONS times series was used).  By the way, if you think I am not using the most appropriate time series, please do contact me and let me know! 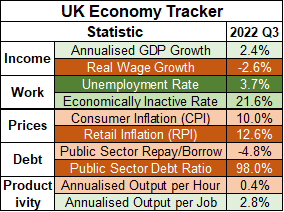 The top line picture of the UK economy is one of recovery and aftershocks following the earthquake that was COVID19.  Unemployment is low but inflation is high and the public sector finances are poor.  Annualised growth is average at the moment but the future is very uncertain with most indicators various shades of brown rather than green.

This table uses a traffic light colour code from green to brown to place the latest quarter in context when compared to historical values.  The historical context used for each statistic to generate the colour codes are the summary statistics that accompany the charts in each section.

By the way, you can hear me discuss the UK economy (based on Q2 2022 data) in the Responsible Reward podcast series hosted by Corinne Carr.

Annualised GDP growth is back in line with historical norms following the rebound from the COVID19 induced recession.   Note the headline GDP growth normally reported in the media is the IHYQ statistic which measures quarter to quarter growth instead and was -0.2% in the latest quarter.  I prefer to use year on year comparisons as much possible hence why I use IHYR.

It is worth pointing out that there has been a persistent tendency for the latest GDP growth figures to be revised upwards.  Last quarter (for Q2 2022), I reported the quarter on quarter growth was -0.1% (IHYQ statistic) but this was later revised to +0.2% so don’t be surprised if the latest figure is revised up as well.

As of Q3 2022, the size of the UK economy is £2.44 trillion pounds per year (BKTL statistic) which is higher than before the pandemic but this is without taking inflation into account.  When we account for inflation (denoted as CVM for Constant Value Model by ONS) then on an index basis, the UK economy was at 99.9 in Q3 2022 (YBEZ statistic) compared to 100.3 in 2019 Q4.  So the UK is not yet back to pre-pandemic levels.

Prior to the pandemic, the key issue for the UK economy was low growth in the 2010s compared to what was normal growth before that. 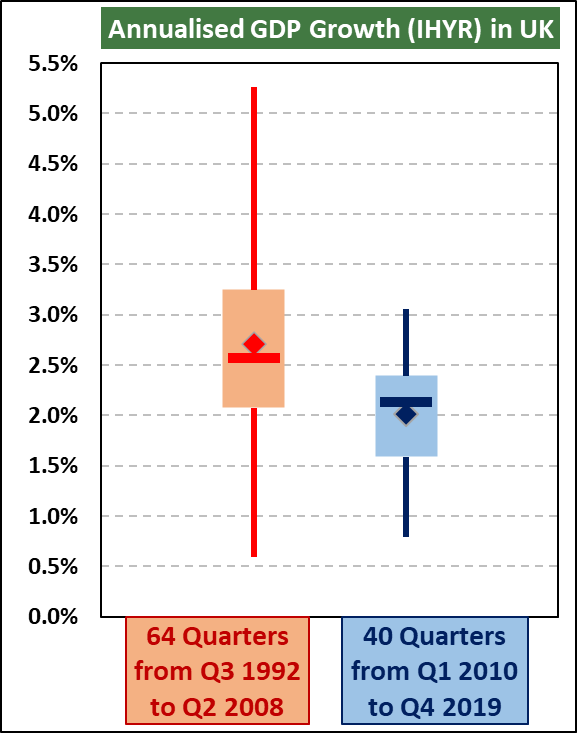 Annualised growth averaged 2.0% in 2010s compared to 2.7% seen between the 1991/2 & 2008/9 recessions.  When you compound that differential of 0.7% over 10 years, that adds up to an economy that was around 7% smaller than it would have been if growth in the last decade had matched what occurred before then.

The question now is whether the future will be another recession given world events, low growth like the 2010s or more normal growth like the late 20th century.  I have nothing to guide me I’m afraid which makes the future the very definition of uncertainty.

Average Weekly Earnings were £618 (KAB9 statistic) which is up 6.1% (KAC3 statistic) on the same quarter of last year but inflation was 8.7% (L55O statistic) hence why real wage growth is negative.

It is important to note that ONS use CPIH for inflation to determine real wage growth rather than CPI that is tracked by the Bank of England and reported on in section 3A.  A full explanation of why this is was given in section 1B of my Q2 2022 post.

Looking ahead, what happens next with real wage growth is likely to depend on how GDP, inflation and unemployment work out and interact with each other.  I note the 1975 & 2008/9 recessions were followed by falling real wages whereas the 1981 & 1991 recessions did not impact real wages.  So it’s a toss a coin which will be the aftermath of the 2020/21 COVID19 recession.

Unemployment is nearing the lowest levels on record last seen in the early 70s.  COVID19 had limited effect on unemployment due to the government’s furlough scheme.

Economists often define 3% unemployment as an economy in full employment.  If the UK continues to approach that point, then either we are going to see record levels of vacancies due to there being a lack of available staff or we will see higher wage growth or both.  But if any future wage growth is not accompanied by stronger economic growth then that is going to have an impact.

Economic Inactivity is back to levels last seen 5 years ago.  However, 2017 was a record low back then so whilst it is a concern that increasing numbers of people are no longer economically active, we did start from a record low.

However, it is worth noting that the increase in economic inactivity is very uneven by demographic and sector.  The 50-64 year old age group accounts for almost 2/3 of the rise in economic inactivity.  Early retirement is the main reason given and it is suspected that this is Long Covid related as explained in this ONS Labour Market report.  I can also recommend this excellent podcast produced by ONS which includes a discussion of this topic.  It will be interesting to see if this dynamic is sustained.

CPI is way above the Bank of England’s target range of +1% to +3% and is highest ever recorded since this index began in 1989.

When one looks at the longer term picture of RPI (see 3b below), it would appear that inflationary spikes tend to persist for at least 2 years.  So whilst it is not yet clear if inflation has peaked, I think one should assume that it will not be until 2024 until this inflationary period dissipates.

The deficit ballooned to record levels during the pandemic as tax takes fell and people’s wages were supported through the furlough scheme.  So far, the recovery has been quite rapid but the budget was not balanced prior to the COVID19 recession and one has to assume that we are still in structural deficit.

A point I’ve made before is the problems with the government finances in the 2010s stem from the fact Gordon Brown chose to run a structural deficit averaging 3.2% of GDP rather than a balanced budget between 2003 & 2007 whilst the economy in growth.  That meant government finances entered the 2008/9 recession on the back foot and the resulting budget deficit was huge.  The slower growth seen in the 2010s then meant it took longer than the 90s to narrow this but the budget deficit had been narrowed to -3.2% by the end of 2016.  That implies the deficit would have been cleared by then had the economy not entered the 2007/8 recession with a deficit.  It also implies we would have entered COVID19 with a balanced budget given what happened between 2017 & 2019.

The Debt Ratio is slowly falling.  With higher GDP growth, the debt ratio would start to fall quite quickly and would give the government more breathing space should another recession come soon.  If this doesn’t happen, we could be back in the same situation as 1980/81 when the government decided it could not afford to expand borrowing especially if interest rates start to rise which is almost inevitable given current levels of inflation.

5a – Productivity – Annualised Growth in Output per Hour (LZVD)

The Royal Statistical Society identified the lack of productivity growth in the 2010s as its Statistic of the Decade.  The point that concerned them was the very low growth in productivity since the 08/09 recession.  In fact looking at this chart, it appear that productivity growth was reasonable in 2011 & 2012 but not since then.  I connect this with the relative lack of unemployment for a recession of this magnitude and I can’t help but think that employment overall was simply too high in the UK during the 2010s given the slower GDP growth in that decade.

5b – Productivity – Annualised Growth in Output per Job (A4YN)

The chart above was for productivity expressed as output per hour work.  In a world where people work different hours that would seem to be the best statistic.  However, the alternative statistic of output per job is still worth tracking as it goes back to the 1960s and gives a longer timeframe to compare against.  As it stands, the current volatility in GDP growth means we will see large discrepancies between the two statistics for now.

The Citizen Misery Index is at its highest level since 1991.

The chart above has a gap in 2001 due to missing data for wage growth.  The chart also shows that the 74/75 and 80/81 recessions were ultimately worse for us than the 90/91 and the 08/09 recessions.  Obviously not everyone’s memory goes back that far so it is possible that this chart is misleading.  But it does have the virtue of tying together the economic statistics that are directly related to our personal lives.

If you would like to receive notifications from me of news, articles and offers relating to the economy, please click here to go to my Newsletter Subscription page and tick the Forecasting category and other categories that may be of interest to you.  You will be able to unsubscribe at anytime.

After an entire meteorological year where the temperature above the median for ever single month, … END_OF_DOCUMENT_TOKEN_TO_BE_REPLACED

Sir Donald Bradman is the GOAT (Greatest of All Time) of sporting GOATs.  All cricket lovers accept … END_OF_DOCUMENT_TOKEN_TO_BE_REPLACED