Here you can find my latest forecast of the 2017 UK General Election on 8th June.  My forecast uses data from my latest UK Opinion Poll Tracker and it is worth reading that post in conjunction with this post.

I am now using 3 different models to examine the likely outcome in each seat which are as follows:

For more details on the methodology of all 3 models, please read my prediction for the seat of Bath where I explain how I make my predictions.  The same process described for Bath is then repeated for all seats to arrive at my forecasts.

Please note that my Brexit Realignment model is intended as a sense check for the other two models at the moment.  Therefore I am not publicising this model as an official forecast yet but this could change in the future.

The Conservatives exceptional performance in Wales would give them a majority in Wales for the first time ever.  A similar picture is repeated in other Labour heartlands such as Yorkshire and the North West (where they won the Copeland by-election in February).  I have no doubt that it was projections like this that prompted Theresa May to call for an early election.  Chart P2A shows the extent of the Conservative gains which are highlighted in the right hand chart. 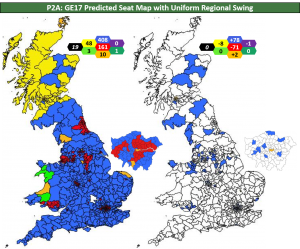 Labour would be wiped out in Cumbria and North Wales.  In Wales, the Conservatives would overtake Labour to become the largest party which would be the first time since 1918 that Labour did not top a Welsh general election poll.  A recent poll in Wales caused quite a stir among political commentators but I predicted this would be the case based on my R1 chart.

There is currently a lot of noise on social media about the potential of tactical voting to hinder the Conservatives.  My tactical vote model suggests that 5 existing Conservative seats would be lost and 13 of the projected gains under my URS model would not come to pass.  This reduces their working majority to 135 seats as shown in table P1B.

These 18 seats can be found by examining my spreadsheet of projected winners.  The link is given at the bottom of the post but chart P3 gives an idea of where the differe 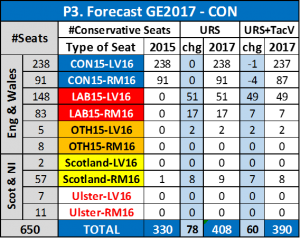 nt outcomes will occur.  It should be no surprise that nearly all of the tactical vote gains come from Remain seats.

I will highlight the 5 additional Lib Dem gains here which are Bath, Lewes, Twickenham, Kingston & Surbiton and St Ives all of which are held by the Conservatives at present.  I explained in my prediction of the Bath seat that Bath is the bell weather seat for me for the success of tactical voting.  Fail to take Bath and the Lib Dems can kiss goodbye to any significant gains in 2017.  I have already made this point before in a youtube clip which looked at the implications of the EU Referendum last year on the main parties.

Factors not yet accounted for in my predictions

At present my election forecast does not take into the following points which could become factors in the final outcome.

Please click on the link below to download an Excel spreadsheet of my seat by seat forecast.  At present, this spreadsheet only list the expected winners for each of my 3 models and does not include expected vote share.  This is something I will add at a later date and I will inform you accordingly in this post.

UK Inflation has risen sharply since the start of 2022 and dominates the media and politics today.  … END_OF_DOCUMENT_TOKEN_TO_BE_REPLACED

Rishi Sunak is the UK's first Prime Minister from a non-white ethnic minority. Did this happen by … END_OF_DOCUMENT_TOKEN_TO_BE_REPLACED

The weather in the UK for October was warmer and sunnier than normal.  Overall we are heading for … END_OF_DOCUMENT_TOKEN_TO_BE_REPLACED

The weather in the UK for September was unremarkable.  Perhaps that is a welcome change after the … END_OF_DOCUMENT_TOKEN_TO_BE_REPLACED

The 2022/23 Women's Super League (WSL) kicks off this weekend in England.  After the Lionesses … END_OF_DOCUMENT_TOKEN_TO_BE_REPLACED