Friday 07:35 – I’ve just woken up to the result that we have a hung parliament which is miles away from my prediction.  Clearly I need to conduct a post-mortem of my model but I did state in my first chart of this post (see bottom of post) that a hung parliament would occur if the CON-LAB lead was under 3%.  Sure enough that is the outcome with the BBC currently saying the CON-LAB lead is 2.3%.  What it also means that we have another epic polling error as the average of all polls in the week before the election showed a CON-LAB lead of 7.5%.  Unlike 2015 when all pollsters got it, congratulations must go to Survation who called it spot on.

I am sure we will have a wave of people claiming to have predicted this error.  As far as I am concerned a valid prediction is only one made in public in advance.  Such a prediction would also need to explain why they expected a polling error on the scale shown in the chart.

The last time such an error occurred was 1983 and the error is on the scale of 1951!  In fact the error is even more remarkable if you look at the 3 main parties.

Another polling post mortem beckons but this election will go down in history.

Friday 02:24 – Been crunching a lot of numbers and so far the polls appear to be error again.  At first glance, CON-LAB lead is 1.5pts nationally compared to my expected 9.5pt lead for CON and the polls 7%.  Turnout looks like being 69/70%.  If this is right, then we have another historical polling error.  My prediction now is that the Conservatives will have a small majority similar to where they are at the moment.

Friday 00:48 – First prediction error with Labour holding Workington instead of it being a CON Gain.

Friday 00:18 – Ok crunching first 6 seats, can make the following observations.  My nURS model was more or less spot on in the North East with the exception of Newcastle East where turnout was much higher.  My sense at the moment is that turnout will be 70% not 68% as I expected and the CON-LAB national lead will be 7.5% as the polls say rather than my 9.5%.  BUT if I rerun my forecast with these adjustments my seat forecast is still around 370 for the Conservatives.

Thursday 23:50 – nURS again bang on with Sunderland Central.  If you have downloaded by s/sheet from my official forecast, you can see which party nURS expects to win in each.  Those who emailed me for the more detailed s/sheet will be able to verify what I am saying.

Thursday 23:35 – Remember also my implied assumption that turnout will be 2% higher than 2015 which came from a 2:1 weighting between Modellers & Self-Reporters when estimating CON-LAB lead.  First two seats would imply turnout up 4%.  If this also means the weighting should have been 1:2 then it also implies the polls are more or less bang on with the CON-LAB lead.  Very early days though.

Thursday 23:21 – Remember that my final model is an average of two models, nURS and eu16R.  One thing I am looking for throughout the night is if one model is doing better than the other.  For the first two seats, nURS got the LAB-CON lead in both seats more or less bang on.  EU16R way out.  My nURS only model currently predicts 370 Conservative seats.  Still a long way to go!

Thursday 22:12 – Newcastle are competing to be first to declare with Sunderland so here are my expectations for the 3 Newcastle seats

Thursday 22:04 – Well this is going to be interesting!  I will be interested to see the projected national share but obviously a long way away at the moment.  SNP projected to lose a lot of seats but who are they going to.

Thursday 21:22 – I’ve checked the BBC coverage of 2015 to find the first 5 seats that declared then.  Assuming the same 5 seats declare first, then here are my predictions.  I am particularly focused on the CON-LAB lead.

Thursday 20:34 – The exit poll will be announced at 2200 and now is a good time for me to define “success” with my predictions.  As the results come, I need to have an idea if my prediction is on track or is drifting away.  I think it makes sense to focus on the expected number of seats that the Conservatives will win and how close the final result will be to my prediction of 375 seats so here is where my thoughts are.

Thursday 20:07 – I have brought myself up to date with all the polls and the final version of my chart that compares modellers with self-reporters can be published.  The Self-Reporters CON-LAB lead is virtually unchanged from when I first created this a few days ago but Modellers CON-LAB lead is down 1pt.  Therefore my weighted average expected CON-LAB lead would fall to 8.8pts but it is not that far away from what I used for my official forecast of 9.5pts.  In any case I have rerun my forecast with the narrower lead and it has no effect. 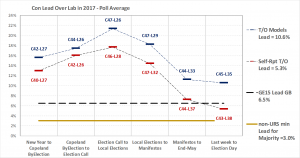 UK Inflation has risen sharply since the start of 2022 and dominates the media and politics today.  … END_OF_DOCUMENT_TOKEN_TO_BE_REPLACED

Rishi Sunak is the UK's first Prime Minister from a non-white ethnic minority. Did this happen by … END_OF_DOCUMENT_TOKEN_TO_BE_REPLACED

The weather in the UK for October was warmer and sunnier than normal.  Overall we are heading for … END_OF_DOCUMENT_TOKEN_TO_BE_REPLACED

The weather in the UK for September was unremarkable.  Perhaps that is a welcome change after the … END_OF_DOCUMENT_TOKEN_TO_BE_REPLACED

The 2022/23 Women's Super League (WSL) kicks off this weekend in England.  After the Lionesses … END_OF_DOCUMENT_TOKEN_TO_BE_REPLACED