For my first Scottish seat forecast, I head up to Labour’s last seat in Scotland.   I have just become aware of a constituency poll in Edinburgh that took place at the beginning of April before the election was called but the data has only just been released by Survation.

My first seat forecast was for the CON/LD battleground of Bath in the South West and in that post I describe my 3 forecasting models in some depth so please read that post if you are unfamiliar with these.  However, now that we know the number of candidates in each constituency, I have created an additional model to handle stand downs by parties and in this seat, both UKIP & the Greens are standing down (though when the poll took place it was assumed that both parties would be contesting the seat).  Also this post will deal with a 5th model that is currently under development and is particularly relevant to this poll.

Edinburgh South was Labour’s only surviving seat in 2015 with a 5% majority over the SNP.  With 78% voting Remain in 2016, this seat was the 9th strongest Remain seat in Britain and the 3rd strongest in Scotland.  Labour would dearly love to hold onto this seat to avoid being wiped in Scotland and I am sure they will be putting a lot of effort into the campaign.  The Survation poll was actually commissioned by the Stop Brexit Alliance which is not surprising given the strength of the Remain vote. 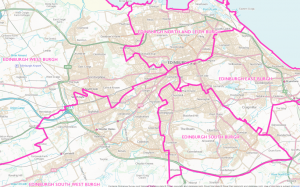 The predictions of my 5 models are shown in the table below.  Currently only my URS+S & URS+T models incorporate parties standing down.  The other models show UKIP and Green vote share predictions.  The Survation poll is shown at the bottom.  Note that this table does not show my normal breakdown of the Leave & Remain votes into the 5 EU Voter Segments I have created. 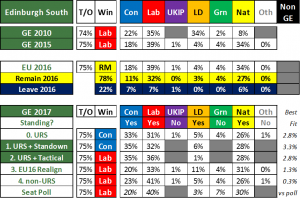 On the right hand side of the table next to each model’s prediction is a column called Best Fit.  This is the sum of the squared differences between the predicted vote shares and the Survation Poll vote shares.  If a model makes a perfect prediction then this figure will be zero so a low number is good, a high number is poor.

My URS and URS+S models are currently predicting a Conservative Gain.  This is because the polls are showing that the Conservatives will make extensive gains in Scotland (up 16%) whilst both Labour (down 9%) and the Nationalists (down 7%) will lose votes as shown in Chart R2 below.  This is the same information as displayed for Scotland in chart R1 of my Opinion Poll Tracker.  Chart R3 is the rolling 15 poll median for the Scottish crossbreaks of all the polls.

These national changes are what turn Edinburgh South blue with a narrow majority over Labour in what would now be a 3-way marginal seat.  Tactical voting options would exist though from the Lib Dem and Green votes and these would be enough to turn the seat back into a narrow Labour Hold as shown by my URS+T forecast. 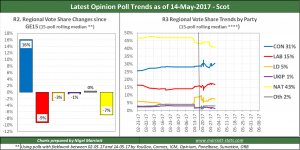 I should point out that the table of predicted results is based on the latest polls as of 14th May.  The Survation poll took place on 5th April and so my URS forecast (and thus my URS+S, URS+T and nURS forecasts) should be based on the Scottish polls at that time.  From chart R3, you can see that since early April the Conservatives and Labour have gained around 3% each whilst the SNP has has lost around 5% so the nURS forecast line (non-Uniform Regional Swing) should actually read CON 20, LAB 38, SNP, 31 which is an almost perfect match for the poll.  Note that my Brexit Realignment model (EU16R) does not depend directly on the polls, it is my estimate of how the Referendum vote last year will reorder itself at a General Election so this forecast doesn’t change.

When I first explored a potential nURS model in Cardiff South & Penarth, I was largely concentrating on the Conservative vote.  What I noticed there was that there was some polling evidence that the degree to which the Conservative diverges from URS is correlated with the extent the Leave vote diverted from the regional average. 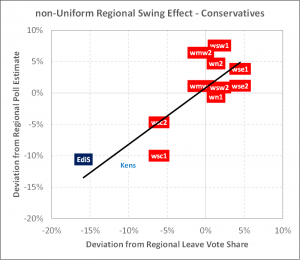 Scotland voted 38% Leave whereas Edinburgh South’s Leave was 16% lower than that.  At the same time, the Conservative vote in the Survation poll would have been 10.5% lower than what my URS model would have said at the time.  I have added this data point to the scatter plot I created for Cardiff South & Penarth and this is the blue EdiS labelled point.  You can see that that the divergences are consistent with what I was observing in Wales and with this extra data point, it now appears that for every 10% the Leave vote diverges from the regional average, the Conservative vote will diverge by 9% from the URS model in the same direction.

I should say that the coincidence between the Labour and SNP nURS vote predictions and the Survation poll may be luck but it suggests that my preliminary nURS model is on the right lines.  What this does is that the change in the Conservative vote that occurs with nURS is cancelled out by an opposite in the vote share of the party that is the closest challenger.  In this seat, it is Labour that benefits from the additional votes and the result was a number close to the Survation poll.

At present, I would want more constituency polls before I turn my nURS model into my official forecast.  If so, I would add a party standown effect to the model and replace my URS+S with this new nURS+S model.  What is clear though is that my preliminary nURS model is forecasting a larger Conservative majority of 181 seats instead of 163 seats from my URS+S model.  The reason why is that there are far more Leave seats than Remain seats and so seats like Edinburgh South where the Conservatives do worse than expected are more than cancelled out by Leave seats where the Conservatives do better than expected.  This explains my comment at the start of this post whereby a poll that suggests that the Conservatives are doing worse than what is being indicated by national polls is actually good news for the Conservatives.

One final point I would like to make is that my preliminary nURS model produces a similar forecast for the Conservative vote as my Brexit Realignment model.  I have seen this in a few seats now and it could be that the non-uniform regional swing effect I am seeing is a form of Brexit Realignment.  I find it interesting that two very different approaches produce not dissimilar results (my EU16R model predicts a Conservative majority of 203 seats) and this indicates to me that Brexit Realignment is going to be a major feature of the 2017 general election.

December marks the start of the 2022 meteorological year and it was very grey, dull and boring. … END_OF_DOCUMENT_TOKEN_TO_BE_REPLACED

Will there be any football this Christmas?  The Omicron variant of COVID19 is wreaking havoc with … END_OF_DOCUMENT_TOKEN_TO_BE_REPLACED