Keir Starmer has to match what Clement Attlee did in 1945 and beat what Tony Blair did in 1997 if he wants to form a Labour government at the next election.  To arrive at Downing Street

by the end of 2024, Starmer must get his party to board an InterCity 125 train and spend the next 3 years following the tracks I lay out in this article.  As I will show, whichever track they take has to go through 125 English Conservative seats, most of which are in between cities.  Hence InterCity 125 becomes the easy to remember name of Labour’s list of target seats.

Why Labour has to target 125 English Tory seats

The facts are these.

For the purpose of this article, I am assuming that the political situation in Scotland remains unchanged i.e. the SNP will be dominant and the Conservatives will be the main opposition.  If so, then Wales & Scotland will basically cancel each other out once boundary reviews are taken into account.  Hence the 125 net gains must come from England. 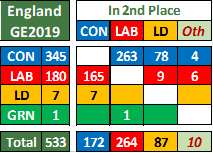 From which parties can Labour take 125 seats in England?  The answer is only the Conservatives.  In England today, this table shows how the 533 seats are broken down by the holder and the 2nd placed party.  Labour are in 2nd place in 264 seats, all but one of them held by the Conservatives.  There are no Lib Dem seats where they are challengers and in any case the Lib Dems & Greens only have 8 seats between them.

Thus Labour has no choice with these facts but to target 125+ English seats held by the Conservatives.

How big a swing does InterCity 125 need?

125 turns out to be a nice round number and it gets even nicer if I break it down into 25s.  Each 25 seats Labour gain from the Conservatives has these impacts on the overall outcome of the election and the swing indicated is from Conservatives to Labour in England only and assumes uniform swing (denoted by UNS for Uniform National Swing) across all seats.

The swings needed for Steps 1 & 2 are entirely feasible outcomes that are within Labour’s grasp given normal politics.  Steps 3 & 4 swings are harder and require Starmer to match Attlee’s & Blair’s achievements.  Swings called for by steps 5 & 6 have never happened before and requires Starmer to be a better politician than Blair & Attlee.

Which seats make up InterCity 125 on the UNS track?

The full list of 150 English Conservative seats that Labour need to target assuming Uniform National Swing in England is shown below.  The following colour codes have been used.

Any seat in underlined italics voted Remain in 2016 whilst those in normal text voted Leave in 2016.  Leave & Remain vote estimates are my own and part 2 of my 4 part video series on the EU referendum explains how I made those estimates.

Click here to download my spreadsheet UK General Election Seat Results 2010-2019 v3.0 for results of the last 4 elections & the 2016 referendum for all 632 seats in Great Britain.  This spreadsheet contains a facility to view seats in order of marginality. 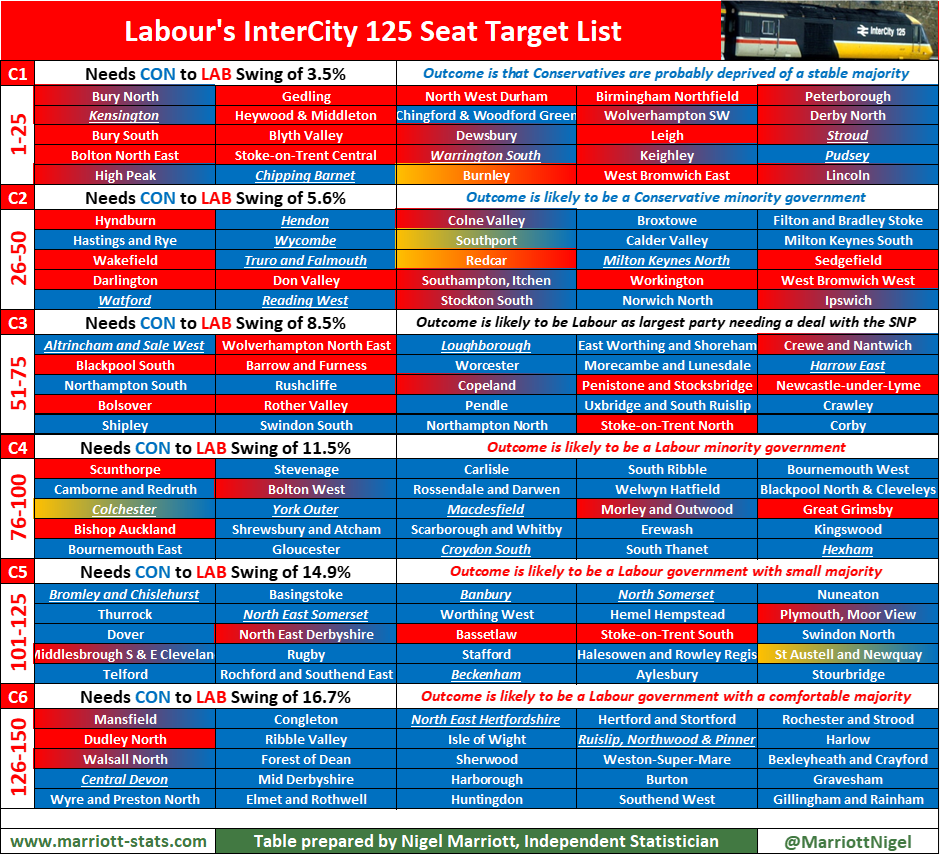 As I said before, the reason I list 150 seats instead of 125 is because Labour will also need to defend their seats that are vulnerable to attacks from other parties.  I will write a separate post at some point about Labour’s defence but the spreadsheet link I gave you just now allows you to see which Labour seats are most vulnerable.

What strikes me about the list above is that whilst discussion of how Labour reclaims its lost Red Wall seats is necessary, they also need to be discussing how to win True Blue seats as well.  Some of these were Labour seats under Blair (e.g. Worcester) but many have never voted anything but Tory (e.g. Hexham).  This just shows the scale of Starmer’s task and why the C5 & C6 groups are probably beyond Labour with a UNS approach.

The other notable point is the reason why I call this list InterCity.  At most, I count 30-40 seats with a railway station where a High Speed Train would normally stop.  Labour has to target seats that lie in between cities (Inter City) not seats in cities (Intra City).  Many of these seats are nowhere near stations offering regular fast rail services, something that anyone living in a major city takes for granted.  It is still a fact that the largest demographic divide between the Labour & Conservative vote is between households with a car and households without a car.

I should point out that a number of the seats on the InterCity125 list may not exist at the next election once the new boundaries in England have been agreed.  But they still serve as a pointer to where Labour needs to focus its efforts.

Is there a different track InterCity 125 could take?

Uniform national swing is a simple assumption to make but that went out of the window in the last decade due to a combination of the 2014 Scottish referendum and the 2016 EU referendum.  The Conservatives won their majority by explicitly targeting leave voting seats and were willing to give up some of their remain seats to do so.  This is known as a Realignment strategy so could Labour make their net 125 gains with realignment instead?

The graphic below shows the 533 seats of England on a demographic map produced using a statistical method known as PCA (Principal Components Analysis).  I have divided this map into two sets of quadrants, the first UL-UR-DR-DL is oriented NW-NE-SE-SW, the second CR-LR-LL-CL is oriented N-E-S-W.  The intersection of these two orientations produces 8 octants which I will denote as UL-CR, DR-LL, etc. 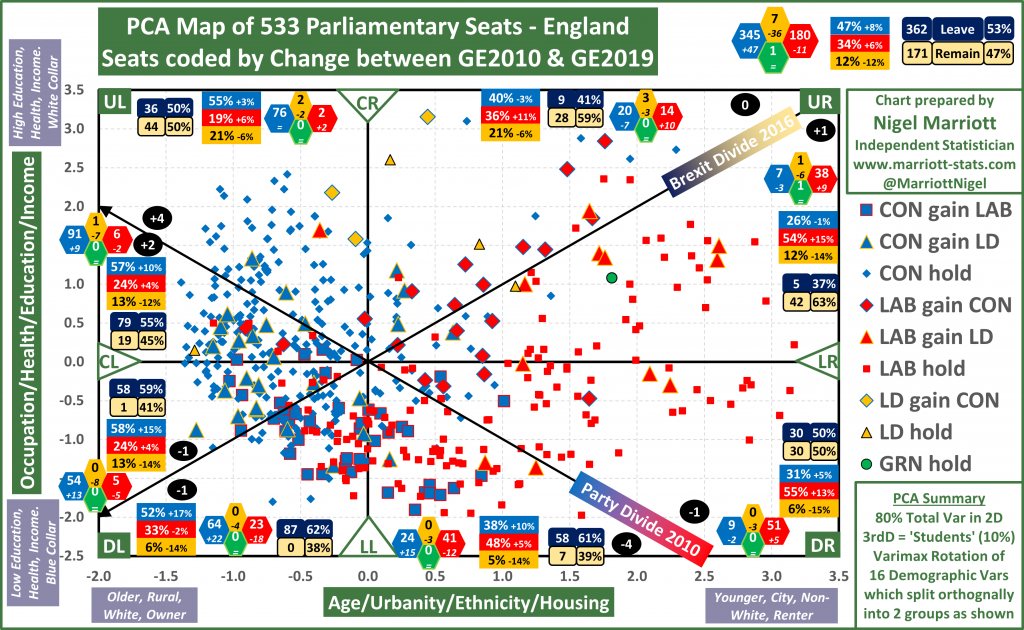 If you would like to receive a copy of this map along with the spreadsheet that allows you to customise it, book a place on my online training course “Introduction to Multivariate Analysis using General Election Data” which will teach you how to produce this map and other types of data visualisations.

This map is a great way to see how the Conservatives won their majority in 2019.  The graphic below is the same as above but I have filtered out only those seats that changed hands between 2010 & 2019.  Note that doesn’t mean the seat changed hands in 2019 e.g. many of the ex-Lib Dem seats were lost in 2015 instead and remained lost in 2019.  It is easy to see that the seats Labour won from the Conservatives in this decade are mostly in the UR quadrant which is a completely different demographic from the LL quadrant where the red wall collapsed in 2019 and the CL quadrant where the Conservatives took out the Lib Dems in 2015. 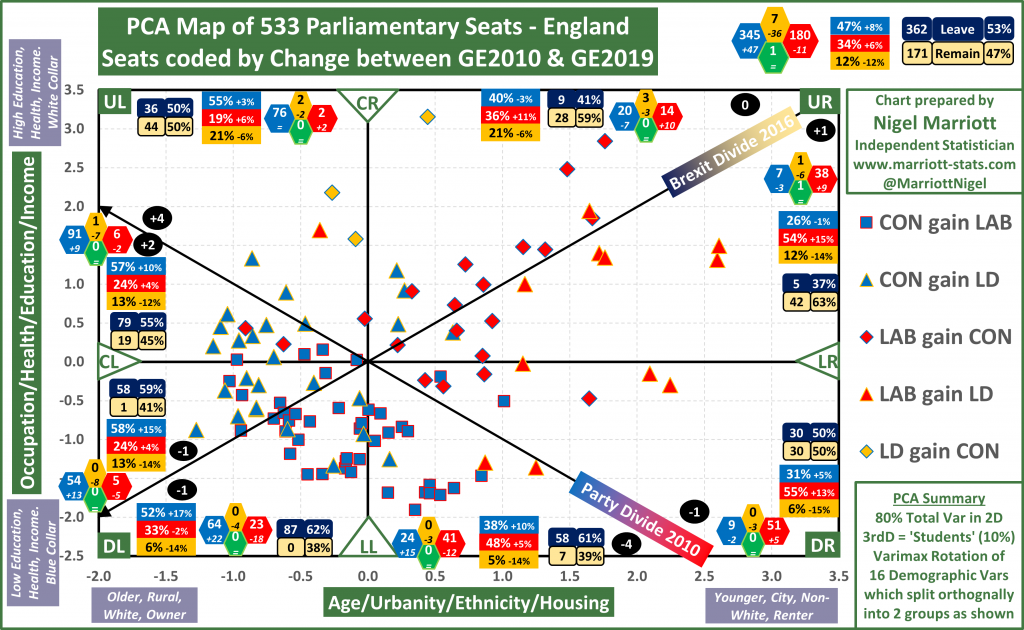 Unfortunately it turns out that a realignment strategy is not much different from a UNS strategy.  The graphic below shows where the InterCity 125 list seats can be found. 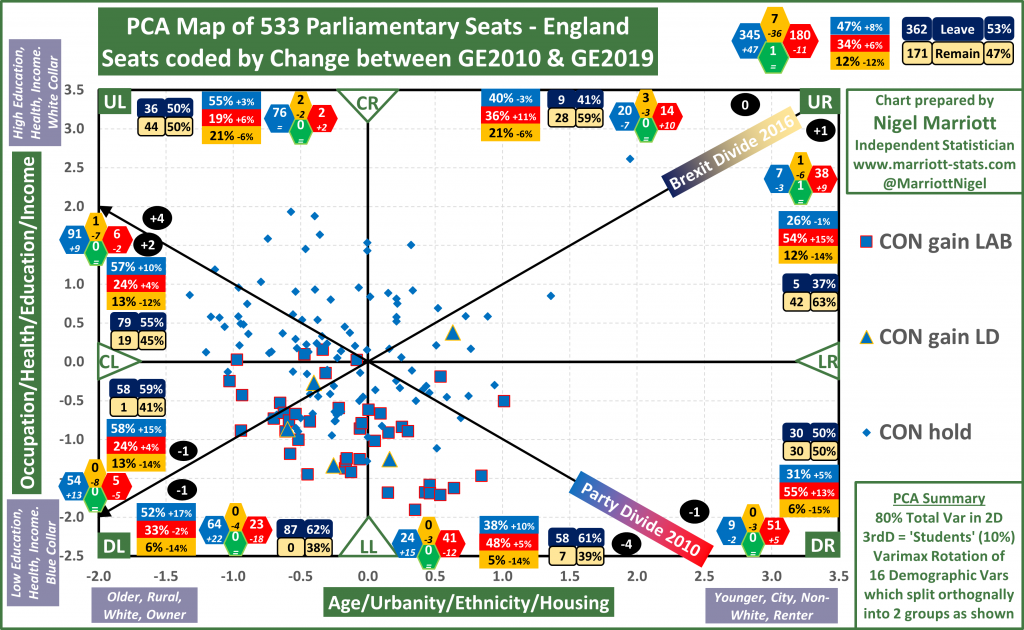 This shows that InterCity 125 is a mixture of winning back Red Wall seats in the LL quadrant and invading the CL quadrant from the LR quadrant.

What is a futile strategy for Labour is attempting to take seats in the CR quadrant.  Over the last decade Labour has had some success on the boundary of CR & LR but if you look back at the first graphic you will see the immediate problem.  CR is where the Liberal Democrats hold most of their seats and have been able to retain most of their votes since 2010.  They have in fact gained 2 seats (St Albans in 2019, Oxford West & Abingdon in 2017) in the UL-CR octant that for me is the target demographic (commuter towns in the South East) for the Lib Dems going forward.  Consequently, if Labour seeks to target CR seats, they will have to fight the Lib Dems as well and that battle will only help the Conservatives.

What are Labour’s options if not InterCity 125?

If Labour is not willing to put in the time and effort to exceed the Conservative to Labour swings achieved by Attlee in 1945 & Blair in 1997, then I can only see two more options for Labour.

Option 2 is probably the easier option for Starmer to choose though it is not without its risks.  The biggest problem for Labour with option 2 is that the benefits are asymmetrical.  Labour gains nothing in the LL quadrant because the Conservative’s majority in all but 7 of those seats exceeds the Lib Dem vote share of 2019.  Greater benefits accrue to the Lib Dems in the CR & CL quadrants where Labour would need to stand down.  The goal of such an alliance is to form a Labour-Lib Dem coalition government and basically requires a degree of sacrifice from Labour that could hurt them in the long run by rehabilitating the Lib Dems and in turn annoy enough of their own voters who might turn to the Greens instead.  But the benefit is that they would be in power so they need to weigh up the pros & cons of this.

Update May 2021 – My article on 3 upcoming by-elections explores this dynamic in more depth.

Personally, I think InterCity 125 is the only game in town so Keir Starmer should take up train spotting now! An additional reason for doing so is that the seats in this demographic space is where the Conservative counter attack will come to take more seats from Labour (this will be the subject of a future article).  So attack and defence will take place in the same type of seats which makes it easier to craft a set of policies and narrative

Please do leave your comments on this Twitter thread which looks at the long term performance of the main parties over the last 100 years in England, Wales & Scotland.  It highlights that unlike 1997, the trends are different in these areas which makes it harder for Starmer to get his party to agree to a common strategy.

If you would like to receive notifications from me of news, articles and offers relating to Elections & Polling, please click here to go to my Newsletter Subscription page and tick the Elections and/or Surveys category and other categories that may be of interest to you.  You will be able to unsubscribe at anytime.

— Read some of my other blog posts on elections —

More posts can be found by clicking on the Elections tab at the top of your screen.

The 2022/23 Women's Super League (WSL) kicks off this weekend in England.  After the Lionesses … END_OF_DOCUMENT_TOKEN_TO_BE_REPLACED

The 2022 UK summer was the 4th warmest & 9th driest on record.  When looked at using principal … END_OF_DOCUMENT_TOKEN_TO_BE_REPLACED

August 2022 was the 4th warmest, 4th sunniest & 10th driest on record.  When looking at average … END_OF_DOCUMENT_TOKEN_TO_BE_REPLACED

UK Inflation has risen sharply since the start of 2022 and dominates the media and politics today.  … END_OF_DOCUMENT_TOKEN_TO_BE_REPLACED

The 5th warmest July on record included a new record temperature of 40.3C on 19th July.  It was also … END_OF_DOCUMENT_TOKEN_TO_BE_REPLACED