My latest UK weather tracker shows that the meteorological summer started with a hot but stormy June.

As always, the meteorological year starts in December which is why June appears as the 7th data point in the charts below.  More information on the layout of the charts can be found in this post. 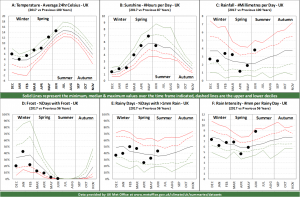 Meteorologically, June marks the start of Summer and 2017 was rather interesting.  Temperature-wise, June 2017 was the 5th warmest June on record.  However, sunshine hours did not match the temperature and in fact was slightly below the median.  This is explained by the fact that whilst the number of rainy days was close to normal, the rain intensity was the 2nd highest on record.  So in effect, we had a hot month interspersed with some heavy storms which resulted in the 6th wettest June on record.

"I mentioned it once but I think I got away with it!" Basil Fawlty didn't get away with it in … END_OF_DOCUMENT_TOKEN_TO_BE_REPLACED

May 2022 was the 5th warmest May on record in the UK.  Whilst temperatures are rising as the days … END_OF_DOCUMENT_TOKEN_TO_BE_REPLACED

Whilst COVID19 was ravaging the world in 2020 & 2021, I felt there was little point in updating … END_OF_DOCUMENT_TOKEN_TO_BE_REPLACED