An unremarkable August, apart from a brief hot & stormy period, means all 3 months of the 2020 UK meteorological summer have been unremarkable.  I suppose we can’t complain given the remarkable spring we had!
The meteorological year starts in December which is why December appears as the 1st data point in the charts below.  More information on the layout of the charts can be found in this post.  Points lying between the upper and lower deciles are shown as open black circles, points lying between the deciles and minimum/maximum are shown as solid black circles and any month with a new record is shown as solid black squares.  All data is supplied by the Met Office and can be found here. 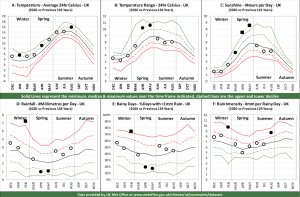 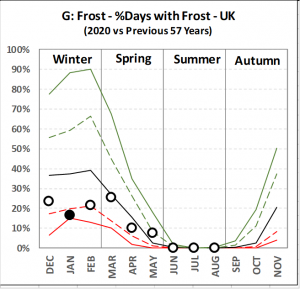 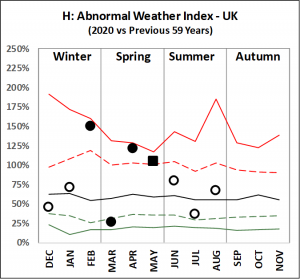 The abnormality index was 67% in August 2020 making it yet another unremarkable month.  Indeed each month of the summer has been unremarkable.  After a Spring full of remarkable weather, I suppose we should have been expecting an unremarkable summer. 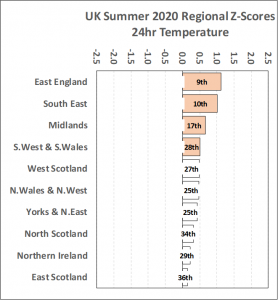 For the UK as a whole, the 2020 spring was well above average in temperature in all regions with the South West the warmest region.  At the other end, Northern Scotland was also above average but less remarkably so.

UK Inflation has risen sharply since the start of 2022 and dominates the media and politics today.  … END_OF_DOCUMENT_TOKEN_TO_BE_REPLACED

Rishi Sunak is the UK's first Prime Minister from a non-white ethnic minority. Did this happen by … END_OF_DOCUMENT_TOKEN_TO_BE_REPLACED

The weather in the UK for October was warmer and sunnier than normal.  Overall we are heading for … END_OF_DOCUMENT_TOKEN_TO_BE_REPLACED

The weather in the UK for September was unremarkable.  Perhaps that is a welcome change after the … END_OF_DOCUMENT_TOKEN_TO_BE_REPLACED

The 2022/23 Women's Super League (WSL) kicks off this weekend in England.  After the Lionesses … END_OF_DOCUMENT_TOKEN_TO_BE_REPLACED