February 2019 ended with the warmest days on record in the month.  As a result, the month as a whole was the second warmest and second sunniest February on record. 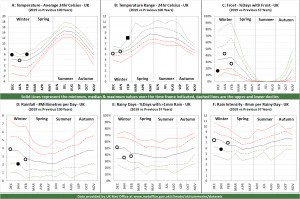 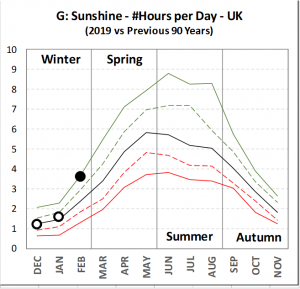 February marks the end of the meteorological winter.  I do not track regional statistics every month but I do track temperature by season for each region so I can update the regional temperature chart below.  This shows the Z-Score for each region for the 2019 winter.  A Z-Score is simply the regional temperature minus the long term average for that region divided by the long term standard deviation for that region.  Doing this, gets around the issue that each region is different on average whereas z-scores all have the same scale, namely number of standard deviations from the mean.

For the UK as a whole, winter 2018 was well above average in temperature and this was the case in all regions.  This was especially the case in Northern Ireland which experienced its 2nd warmest winter on record.  It is also notable that the western side of England and Wales was warmer than the rest of the UK.

The 2022/23 Women's Super League (WSL) kicks off this weekend in England.  After the Lionesses … END_OF_DOCUMENT_TOKEN_TO_BE_REPLACED

The 2022 UK summer was the 4th warmest & 9th driest on record.  When looked at using principal … END_OF_DOCUMENT_TOKEN_TO_BE_REPLACED

August 2022 was the 4th warmest, 4th sunniest & 10th driest on record.  When looking at average … END_OF_DOCUMENT_TOKEN_TO_BE_REPLACED

UK Inflation has risen sharply since the start of 2022 and dominates the media and politics today.  … END_OF_DOCUMENT_TOKEN_TO_BE_REPLACED

The 5th warmest July on record included a new record temperature of 40.3C on 19th July.  It was also … END_OF_DOCUMENT_TOKEN_TO_BE_REPLACED