I hope you enjoyed the least rainy June on record!  It was also the third warmest and fifth sunniest June on record.
The meteorological year starts in December which is why December appears as the 1st data point in the charts below.  More information on the layout of the charts can be found in this post.  Points lying between the upper and lower deciles are shown as open black circles, points lying between the deciles and minimum/maximum are shown as solid black circles and any month with a new record is shown as solid black squares. 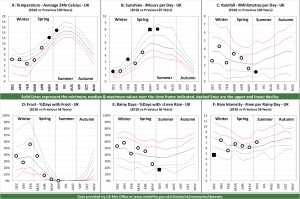 The charts show that June continued on from May in being notably warm and sunny.  More interesting was that it was the least rainy June on record with the number of rainy days (defined to be days where more than 1mm of rain falls) averaging 5 across the UK or 1 in 6 days for the month of June.  Total rainfall was low but the rain intensity was normal which tells us that we haven’t had a stormy June like last year.

"I mentioned it once but I think I got away with it!" Basil Fawlty didn't get away with it in … END_OF_DOCUMENT_TOKEN_TO_BE_REPLACED

May 2022 was the 5th warmest May on record in the UK.  Whilst temperatures are rising as the days … END_OF_DOCUMENT_TOKEN_TO_BE_REPLACED

Whilst COVID19 was ravaging the world in 2020 & 2021, I felt there was little point in updating … END_OF_DOCUMENT_TOKEN_TO_BE_REPLACED