Whilst the UK shivered under two major snow storms in March, it turns out that the whole month was unremarkable meteorologically albeit somewhat colder than normal.The meteorological year starts in December which is why December appears as the 1st data point in the charts below.  More information on the layout of the charts can be found in this post.  Points lying between the upper and lower deciles are shown as open black circles, points lying between the decile and minimum/maximum are shown as solid black circles and any month with a new record is shown as solid black squares. 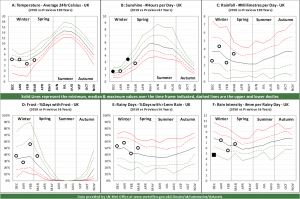 For February, every chart has an open circle indicating that March was an unremarkable month.  The only point of interest is that the average temperature in March was lower than it was in December and January which is why it feels as though Spring has not arrived.  In fact, this is more to do with the relative mildness of the winter in those months.

December marks the start of the 2022 meteorological year and it was very grey, dull and boring. … END_OF_DOCUMENT_TOKEN_TO_BE_REPLACED

Will there be any football this Christmas?  The Omicron variant of COVID19 is wreaking havoc with … END_OF_DOCUMENT_TOKEN_TO_BE_REPLACED