I thought August was unremarkable but September was even more boring! 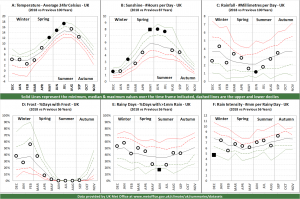 I can honestly think of nothing meaningful to say about September so I won’t say anything! 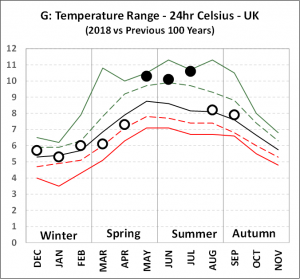 I will however introduce this new chart G which is for the Temperature Range.  The Met Office tracks daily highs and daily lows for temperature and from that, they calculate the average high temperature and the average low temperature for each month.  By taking the difference between these two numbers I get this chart.

This adds some interesting context to our hot summer this year.  The high temperatures on average were also accompanied by large variations between day and night.  This is something I noticed myself in that whilst it was very hot during the day, the nights were not as uncomfortable as other years and that was because the minimum temperatures whilst high were not exceptional.

December marks the start of the 2022 meteorological year and it was very grey, dull and boring. … END_OF_DOCUMENT_TOKEN_TO_BE_REPLACED

Will there be any football this Christmas?  The Omicron variant of COVID19 is wreaking havoc with … END_OF_DOCUMENT_TOKEN_TO_BE_REPLACED