Meteoologists define spring in the UK to be the period from March to May so spring is now over and we are officially in summer.  The 2018 spring was very sunny but this hides the fact that our spring climate has changed quite notably over the last 25 years.

I analyse the long term trends in the UK weather using a statistical tool known as Standardisation.  This means that the 3 key variables of Temperature, Sunshine and Rainfall are recalculated so that they all have the same units, which is number of standard deviations from the mean.  Such variables are known as Z-Scores which by definition will have a mean value of 0 and a standard deviation of 1.  For more information on how I have done this, please read my post on trends in the UK summer of 2017.

For the spring of 2018, the z-scores for temperature, sunshine and rainfall were respectively +0.6, +0.6 and +0.4.  So across all three dimensions, the spring was half a standard deviation above average i.e. pretty decent.  If you have been following my monthly weather tracker then you will know that this was not the case in all 3 months.  March was cold whilst May was warm so this is a good illustration that a seasonal average can mask considerable variation from month to month.

This clearly shows a shift in our spring climate over the last 100 years of roughly 1 standard deviation.  Recall that the baseline for the z-score calculation is based on the idea of “living memory” which I have defined to be the last 50 years of 1968 to 2017.   We can characterise our springs broadly as follows:

So clearly 2018 is largely consistent with the recent climate period.

How many dimensions does Spring have?

The long term trends chart above suggests that the z-scores for temperature, sunshine and rainfall all appear to be correlated.  In fact this can be illusory as the above chart uses moving averages.  If we look at the actual z-scores, we can see what the correlation is in the 3 scatter plots below.

Looking at the 3 scatter plots in turn, we see that temperature is positively correlated with sunshine, i.e. sunny days tend to be warm, temperature is not correlated with rainfall i.e. wet days can be either warm or cool, whilst rainfall is negatively correlated with sunshine i.e. dark days tend to be wet.  A statistician would look at these charts and say that what at first appears to be 3-dimensional data (temperature, sunshine and rainfall being the 3 dimensions) is in fact closer to be being 2-dimensional.  Both of the new dimensions would be a weighted average of these 3 z-scores e.g. dimension 1 might be temperature plus sunshine and dimension 2 might be rainfall minus sunshine.  There are in fact many possible weighted averages of the z-scores that could be used so we need a method that identifies the best weighted average of the z-scores that reduces the dimensionality of spring weather from 3 dimensions to 2 dimensions.  Furthermore, we would like there to be no correlation between the two dimensions i.e. if we did a scatter plot of the two dimensions, no relationship would be apparent.

When I analysed Winter 2018, I introduced the idea of components (the word we will use instead of dimension) and I stated that there is a method known as Principal Components Analysis (PCA). that can do these calculations.  If this is the first time you have seen these words, then I strongly recommend you read my Winter 2018 post to familiarise yourself with the concept of a component.  You also need to familiarise yourself with the concept of the variance which is the square of the standard deviations of the components. 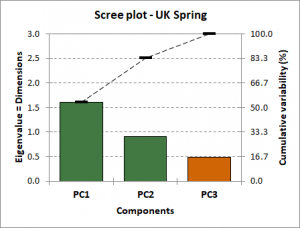 So if I carry out a PCA using the 3 spring z-scores, what do I find?

What do these components look like?  The best way to answer that question is to plot the Correlation Bi-Plot.  Two versions are shown, an original known as an Unrotated BiPlot and an alternative version known as Rotated BiPlot (using Varimax rotation for those who want to know such details!) 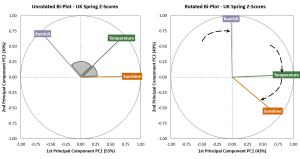 What does a bi-plot show?  It shows the correlation of the original variables (3 z-scores in this instance) with the two new principal components PC1 & PC2.  Each axis label shows (in brackets) how much the components account for of the total variance and since the total of these values is less than 100%, this warns us that the bi-plot is still an approximation of the entire dataset and therefore some information is missing.  Despite that, it is still very informative.

However, you are not required to use the original biplot that is created when you first do PCA.  The current PC1 and PC2 require some mental gymnastics to characterise exactly what they represent.  Fortunately, PCA allows you to rotate the labels around the circle by an equal angle for all labels.  If I rotate the labels by about 40 degrees clockwise, I end up with the rotated biplot above.  Now, the rotated PC1 and PC2 appear to have a much cleaner interpretation; PC1 measures how bright and sunny Spring is and PC2 measures how wet and dull Spring is.

Let’s not forget that Principal Components are by definition uncorrelated with each other, which means you can analyse each component independently.  Of particular interest is calculating the PC1 and PC2 values for each year separately and then looking at the trends over time.  I have done this for the chart below.

The scale used by PC1 and PC2 is similar to the z-score concept.  0 represents the long term average, positive numbers above average and negative numbers below average.  The numbers themselves broadly correspond to the number of standard deviations above or below average.

Is it possible to use the principal components to make predictions?  I have never tried this for Spring but I have for Summer where a quite remarkable pattern emerges.  You will have to wait for my Summer Trends post published in September though to find out about that but I am predicting that the summer of 2018 will not be anything special!

It was a warm and sunny March this year in the UK.  In fact it was the 2nd sunniest March on record. … END_OF_DOCUMENT_TOKEN_TO_BE_REPLACED