Meteorologists define summer in the UK to be the period from June to August so summer is now over and we are officially in autumn.  The 2018 summer was the joint hottest on record and in doing so blew apart my prediction that we would have to wait till next year for our next good summer!

For the summer of 2018, the z-scores for temperature, sunshine and rainfall were respectively +2.0, +1.9 and -1.0.  So across all three dimensions, the summer was 1 to 2 standard deviations away from the mean indicating a very untypical summer.  If you have been following my monthly weather tracker then you will know that August was unremarkable whilst June and July were hot, dry and sunny.

This clearly shows a shift in our summer climate over the last 100 years of roughly 1 standard deviation in some cases.  Recall that the baseline for the z-score calculation is based on the idea of “living memory” which I have defined to be the last 50 years of 1968 to 2017.   We can characterise our summers broadly as follows:

How many dimensions does Summer have?

The long term trends chart above suggests that the z-scores for temperature, sunshine and rainfall all appear to be correlated.  In fact this can be illusory as the above chart uses moving averages.  If we look at the actual z-scores, we can see what the correlation is in the 3 scatter plots below.

Looking at the 3 scatter plots in turn, we see that all 3 variables are correlated with each other.  A statistician would look at these charts and say that what at first appears to be 3-dimensional data (temperature, sunshine and rainfall being the 3 dimensions) is in fact closer to be being 1-dimensional.  This new dimension would be a weighted average of these 3 z-scores known as a Component.  There are in fact many possible weighted averages of the z-scores (components) that could be used and in my Spring 2018 Trends post, I introduced the method of PCA (Principal Components Analysis) which can take our 3-dimensional data set, calculate 3 new components that are statistically uncorrelated with each other, and with the property that the first component would account for the greatest possible share of the total 3-dimensional variance and thereby reducing the effective dimensionality of the data to 2 or even 1 dimension.  Please do read that post if you need to familiarise yourself with PCA. 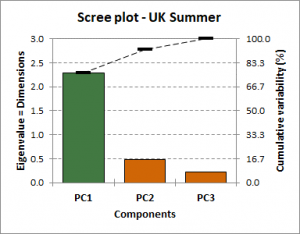 dimensions is accounted for by each component.  Here, the first component PC1 accounts for 2.25 dimensions or more strictly 76% of the total variance across the 3 dimensions.  PC2 & PC3 each account for less than 1 dimension  Before, had we chosen any one of the three z-scores, we would only account for 1/3 of the total variance so PCA has resulted in a single new components that almost account for a clear majority of the variation seen normally in 3 dimensions.  So it is quite correct to say that our summer weather is effectively 1-dimensional

The Correlation Bi-Plot shows the correlation of the original variables (3 z-scores in this instance) with the two new principal components PC1 & PC2.  Each axis label shows how much the components account for of the total variance and since the total of these values is less than 100%, this warns us that the bi-plot is still an approximation of the entire dataset and therefore some information is missing.  Despite that, it is still very informative.  Note, for ease of interpretion, I have replaced Rainfall with Dryness where Dryness is just the negative of Rainfall i.e. Rainfall multiplied by -1. 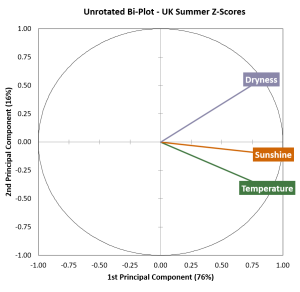 Let’s not forget that Principal Components are by definition uncorrelated with each other, which means you can analyse each component independently. The bi-plot tells us that the 2nd Principal Component is basically the difference between the Dryness Z-Score and the Temperature Z-Score.  So when PC2 is positive this indicates the summer is dry and cool and when it is negative, it is warm and wet.  However, PC2 only accounts for 16% of the total variance so from now on, I will ignore this and concentrate on PC1.

The great value of PCA is that we can look at long term trends in our climate using a single index.  I have done this for PC1 in the chart below.  The scale used is similar to the z-score concept.  0 represents the long term average, positive numbers above average and negative numbers below average.  The numbers themselves broadly correspond to the number of standard deviations above or below average.

When I first performed PCA on UK summer data after 2003, I was startled to see an apparent pattern emerging.  My understanding of weather is that long term predictions are not possible and

yet our good summers seemed to coming every 6 to 8 years.  If we define a good summer to be one where PC1 is greater than 2 (as highlighted by the green checked bars in the chart), the first thing that is clear is that the good summers seem to be discontinuous from our other summers.  By this I mean, there are very few summers with PC1 values between 1 & 2.  More notably, the gaps between the good summers did not appear to be random as shown in the chart to the left.  Either the next good summer came straightaway or we had to wait 6 or 7 for the next one.

A final point from the PC1 chart.  The long term trend as shown by the black line shows a clear shift in the 1970s to better summers.  However, there has been no discernible trend since then.  I think this is an extremely important point to bear in mind when discussing the effect of Global Warming on the UK.  Our summers have not been getting warmer and warmer.  Instead, they underwent a step change in the 1970s but have not had any noticeable trend since.  In fact, it appears that the main effect of Global Warming on the UK has been warmer winters most of all.  Therefore, if we are trying to anticipate future climate change in the UK and how to adapt, we should not be expecting warmer and warmer summers.  The summer of 2018 set some new records but it does not mean that all of our summers in the future are going to be like that and the UK will continue to have poor summers as well.

After an entire meteorological year where the temperature above the median for ever single month, … END_OF_DOCUMENT_TOKEN_TO_BE_REPLACED

Sir Donald Bradman is the GOAT (Greatest of All Time) of sporting GOATs.  All cricket lovers accept … END_OF_DOCUMENT_TOKEN_TO_BE_REPLACED