The BBC presenter Samira Ahmed has won her claim for equal pay at the employment tribunal.  She successfully claimed that Jeremy Vine was an appropriate comparator for her pay.  She is not the only female presenter to make a claim with over 50 more claims under consideration at present.  Assuming that these are all successful, will these have any effect on the BBC’s gender pay gap for 2019 of 7p in the pound?

You can read the full judgement here but here are the key points I’ve taken out of it. 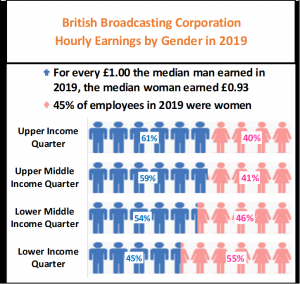 If you download my gender pay gap spreadsheet and look up British Broadcasting Corporation you will get the following chart for their 2019 submission.  The BBC employ 5000 to 19999 staff of which 45% are women.  For every £1 earned by the median man, the median woman earned 93p.

If you have been reading my blogs on pay gaps you should by now know what I mean by the median man and median woman.  If not, it is simply the 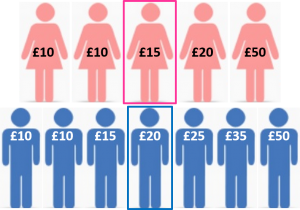 man and woman standing in the middle of their respective lines when men and women line up separately in order of their hourly earnings as shown in this graphic.

So if the BBC is heavily biased against female presenters who 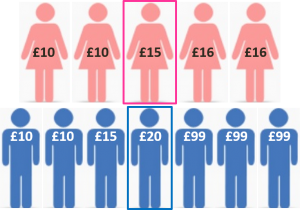 Unequal pay has no effect on gender pay gaps

This is yet another illustration of a point that I have repeatedly made, namely that unequal pay has nothing to do with gender pay gaps.  If you stop and think about it, who has the financial 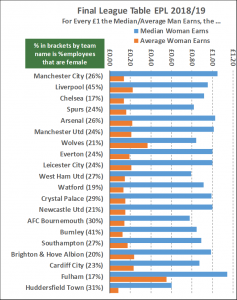 resources to sustain a legal challenge for equal pay at an employment tribunal?  It’s most likely to be high earners in the first place, certainly those earning more than the median salary which means that even if those cases succeed, the pay gap is not going to change.  At most it will shift some women from the upper middle income quarter to the upper income quarter and therefore rebalance the income quarters a bit but nothing more than that.

You might argue though that resolution of equal pay cases would affect the average women’s earnings and therefore close the mean gender pay gap.  That is correct but statisticians recommend that more attention is given to the median gender pay gap since the mean pay gap is too easily distorted by high earners.  Premier league football clubs are an excellent example where a squad of 25 millionaires completely dominate the average and change what are typically median pay gaps of zero into gigantic mean pay gaps.  That is not to say that mean pay gaps are worthless, just that more attention is paid to the median pay gap.

Would you believe me if I were to tell you that far from closing a gender pay gap, winning an equal pay case at an employment tribunal could actually have the opposite effect of widening the gender pay gap?  Take a moment to think why this might be.

The reason why this might be the effect is that often when a women wins an equal pay case, she has often reached the end of road in trying to resolve the issue with their employer.  Consequently, it is quite common for the women to have stopped working for the employer. 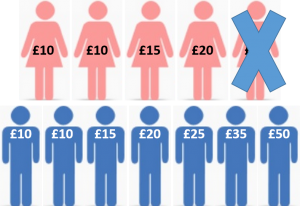 What happens when these high earning women leave the employer?

Counter-intuitive isn’t it!  Yet another example of why you need to speak to a statistician if you want to understand what a gender pay gap is and isn’t telling you.  In the meantime, if you hear someone mixing up the concept of equal pay and gender pay gap, please tell them off and point them towards my blogs.

The moral of this story is …

Make sure that equal pay cases do not arise in the first place!  By the time it gets to an employment tribunal, it’s already too late and the end result is that your pay gap is likely to widen and you will have to contend with the negative publicity as well.  Get ahead of the game by carrying out an Equal Pay Audit which is something I can help you with.

After an entire meteorological year where the temperature above the median for ever single month, … END_OF_DOCUMENT_TOKEN_TO_BE_REPLACED

Sir Donald Bradman is the GOAT (Greatest of All Time) of sporting GOATs.  All cricket lovers accept … END_OF_DOCUMENT_TOKEN_TO_BE_REPLACED