… & why are gender pay gaps so small at male dominated private sector employers?

When I asked people recently who on average had the larger gender pay gap, the results were –

The two box plots below show a clear pattern. The black diamonds are the average hourly pay of women of the employers within each female representation band. The difference is even starker if I look at highly male dominated (>90% men) private sector employers where the average woman is paid 95p and there are no such public sector employers. 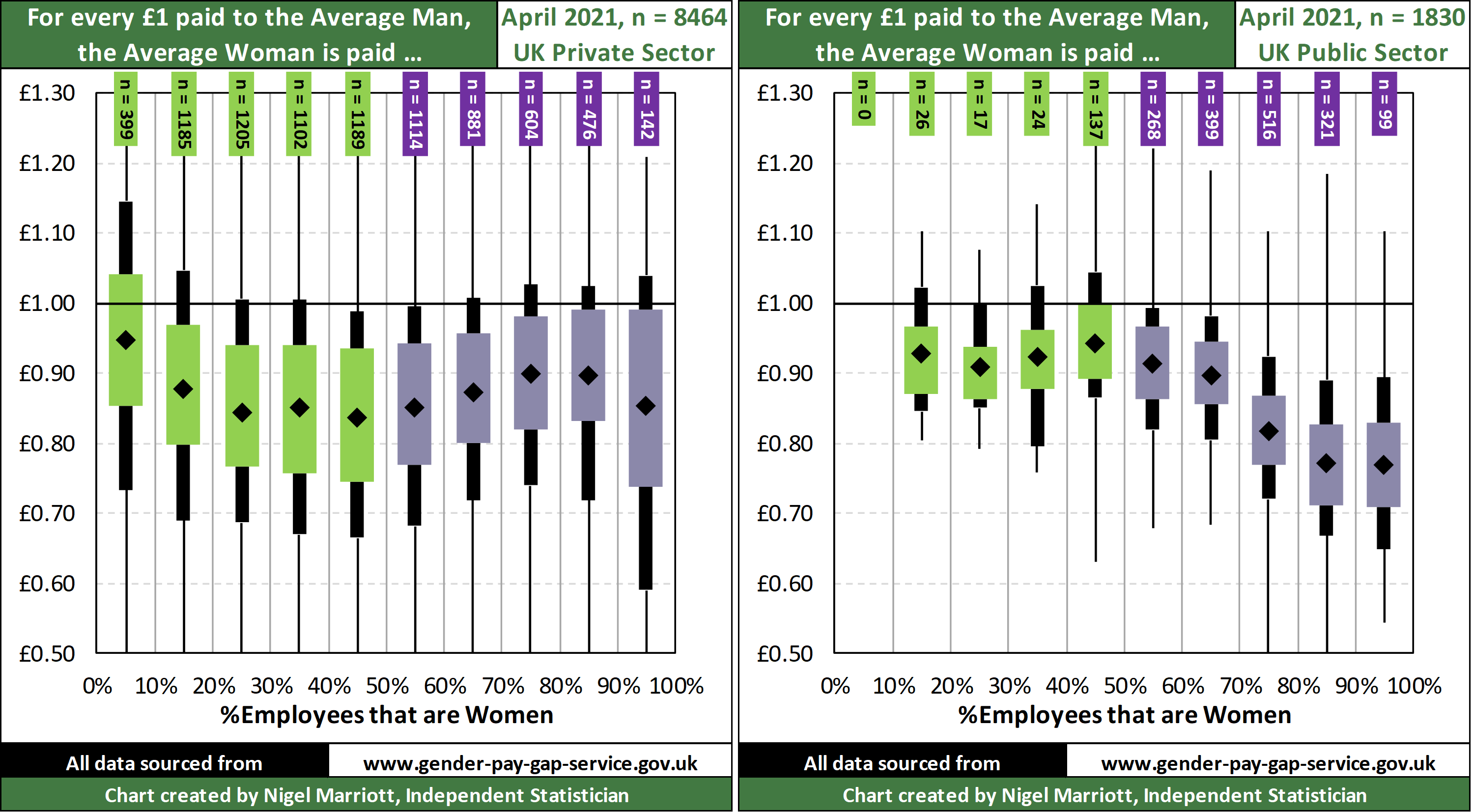 There are three reasons why this happens which are all connected

Here are the pay quarter breakdowns by gender (or Gender Fingerprints) of two employers who are Mirror Images of each other.  The average woman is paid 87p at Western Power Distribution (South Wales) and 79p at Bellevue Place Education Trust.  Clicking on their names will take you to their 2021 narratives.  I chose these two because they are reasonably representative of the average male dominated private sector employer & the average female dominated public sector employer.

I say these two employers are mirror images for these reasons.

75% of female dominated public sector employers are in the Education sector with the remainder in the NHS.  Bellevue Place’s gender fingerprint is one I’ve seen time and time again in education especially among primary schools.   90-95% of employees in the lower pay half are women with men clustered into the upper pay half or quarter.  Even then the upper pay quarter is still 75% women so it is not the lack of women in high paying roles that causes the pay gap, it is the extreme lack of men in low paying roles and the reasons why are easy to figure out.  Much harder to figure out is whether and how this will change in the future.  Personally, I think such employers will struggle mightily to close their pay gaps and could be in the same place in 20 years time but if you think otherwise, please do comment on this article using the links at the end.

Bellevue Place’s 2021 narrative describes all of this quite well and even gives pay gaps within 4 types of jobs.  Interestingly, they have pay gaps favouring women in 3 of the 4 job types but that doesn’t prevent them from having a large pay gap when combined.  I have explained this effect before, which is known as Simpson’s Paradox, in my article “What is the gender pay gap at Novartis“. 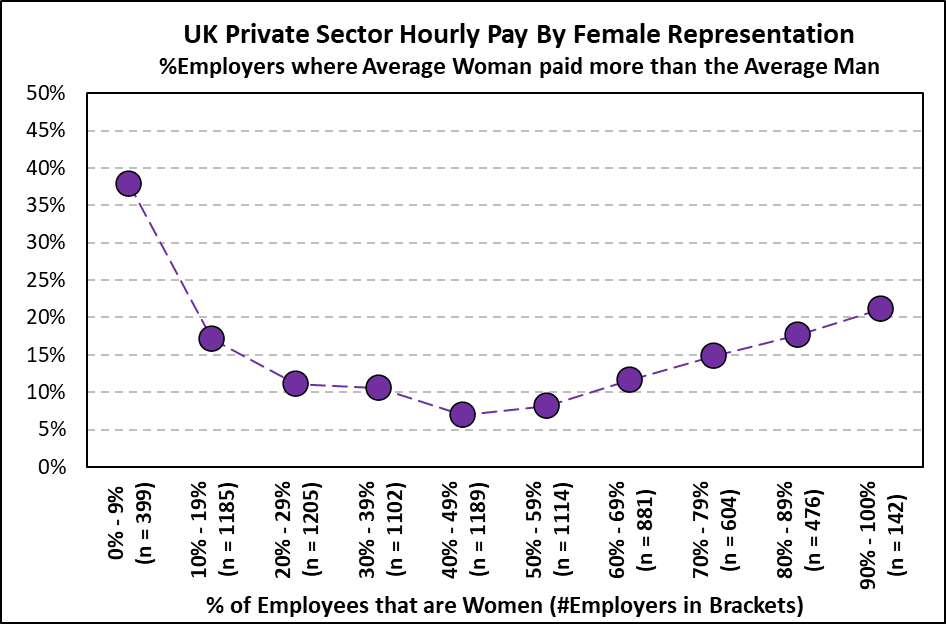 Part of the reason for this is sampling variation due to very small sample sizes.  If an employer has only 400 employees, of which 95% are men, that means they only have 20 women. 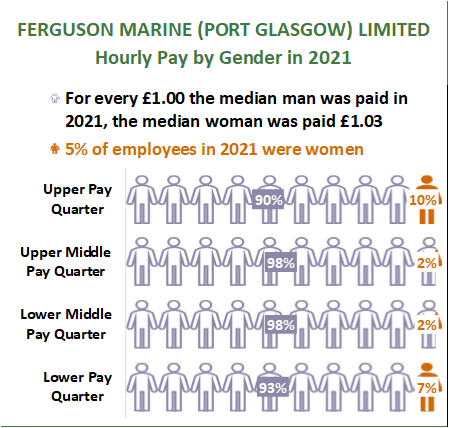 If the employer has no pay gap on average, we can expect 5 women in each pay quarter.  However, once people start joining and leaving, the laws of chance mean we can expect these to fluctuate between 0 & 10 women per pay quarter and the result can be considerable changes in the pay gap.  My article “Life on Mars” demonstrates this effect in more detail but what I see at Ferguson Marine here is completely consistent with this effect.

The same effect can be expected to occur in the reverse situation when employers are highly female dominated.  The chart above shows the % of employers with pay gaps favouring women rises as the employer approaches 100% female but the rise is nowhere near as fast as for highly male dominated employers in the private sector.  Of course in the public sector as we saw above, the reverse happens with fewer and fewer employers having pay gaps favouring women as the employer approaches 100% female.  So this is why I say that it appears that women can thrive in extremely male dominated places.

Why this should be, I leave for you to think about but I am familiar with a number of claims on social media that women are increasingly using gender pay gaps to decide who they want to work for.  If you are making such decision solely on the mean or median gender pay gap (and you should never be doing that!) then you should seek to work at a very male dominated employer with as few women as possible.

If Ferguson Marine decided it wanted to increase the number of women working there, then all the evidence from the charts above show that in all probability the pay gap is going to widen as they add women to their workforce.  The box plot at the beginning indicates that in the private sector, as you go from 0% women to 20% women, your pay gap goes from zero to large fairly quickly.  A question that you should be asking yourself is would we see the same effect for other protected characteristics such as ethnicity, sexuality or disability.  Ethnic minorities, LGBT and disabled people are all true minorities in the 0-20% range and I will be writing an article soon giving my thoughts on whether this is likely to be the case for disability.

Update 1st August 2022 – Article has been now been published here.

Pay Scales are not symmetric

After an entire meteorological year where the temperature above the median for ever single month, … END_OF_DOCUMENT_TOKEN_TO_BE_REPLACED

Sir Donald Bradman is the GOAT (Greatest of All Time) of sporting GOATs.  All cricket lovers accept … END_OF_DOCUMENT_TOKEN_TO_BE_REPLACED