The 2022/23 Women’s Super League (WSL) kicks off this weekend in England.  After the Lionesses triumph this summer in winning the European Championship, more interest, spectators and TV coverage are expected.  If you are new to the WSL and the women’s game in general, why not download my spreadsheet listing all trophy winners since 1992 to find out which teams are the GOATs of English women’s football?

The spreadsheet has a number of sheets which I will now explain in more detail.  Please note that all sheets are protected but there is no password if you want to unprotect a sheet.

This sheet lists all winners of the 3 main domestic trophies in England i.e. Women’s Super League (Premier League National until 2010), FA Cup and League Cup (started 2011).  The 1st season shown is 19991/92 which is the year the Premier League National started.  The Women’s FA Cup began in 1970 but I have ignored winners before 1992 partly because the FA only took over the management of the competition in 1993.  I have also shown the runner ups in all competitions as I think that can be useful in identifying the good teams of the past.

The 2016/17 & 2019/20 WSL seasons are asterisked in red.  This is because 2017 marked the transition of the WSL from a summer season, which had been the case from 2011 to 2016, to a winter season like that for men.  As a result a complete season was not played and no League Cup took place.  2020 is marked as a result of the COVID19 pandemic which halted all sport.  The 2020 WSL season was not resumed and Chelsea were declared champions on a points per game basis.

The sheet also shows any English club that played in a European Champions League final.  This began as the UEFA Women’s Cup in 2001 and was renamed UEFA Champions League in 2009.  Currently there is no equivalent UEFA tournament for the Europa League and Conference League for women.

Finally winners of various doubles are shown.  Treble winners are not shown but can be spotted if they appear as multiple double winners in the same year e.g. Arsenal in 2011, Chelsea in 2021.

This sheet allows you to see which teams were the best in any time period.  To do this, change the years shown in cells A1 (From year) and B1 (To year).  You can then sort by any of the columns to find out which team was top. 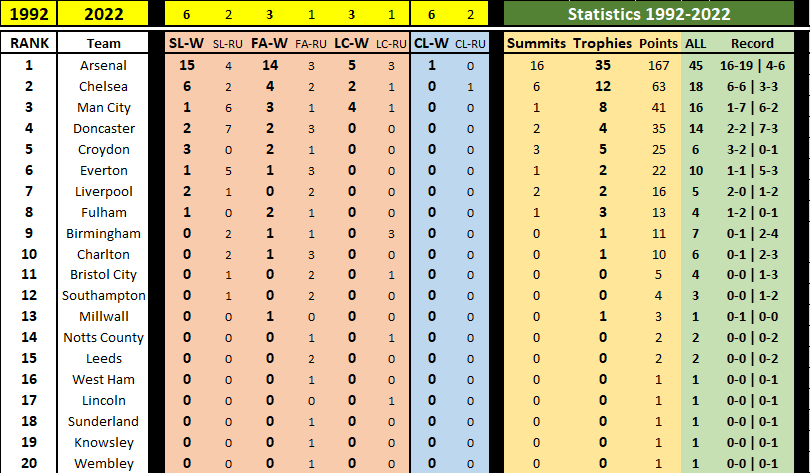 By the way, the 20 teams listed above are the only teams to have won trophies or been runner up since 1992.

For each team, I have counted how many times the team won the relevant trophy or was a runner up.  Columns D to T should be obvious but I have added some further statistics in columns V to Z.  These are explained below:

This is a summary of the top teams for 3 different eras as below.  All data comes from the RankingsEngland sheet but this sheet is not updated automatically.

By the way, you may find this earlier post of mine about GOATs (Greatest Of All Time) of interest.  It is where I first came up with the graphic below.

Please do leave your comments on this Twitter thread.

After an entire meteorological year where the temperature above the median for ever single month, … END_OF_DOCUMENT_TOKEN_TO_BE_REPLACED

Sir Donald Bradman is the GOAT (Greatest of All Time) of sporting GOATs.  All cricket lovers accept … END_OF_DOCUMENT_TOKEN_TO_BE_REPLACED