Round 3 of the 6 Nations is over and we have 3 more games to discuss and dissect.  More importantly, world rugby has updated its rankings and I can update my forecasts for round 4 based on these.  I explained how the rankings work in my previous 6 Nations post and that is also worth reading to see how the forecast of round 4 now differs from then.

Looking back at that post, it was interesting how the rankings predicted a narrow win for Scotland over Wales.  Given that Scotland had not beaten Wales for 10 years that was quite a call and in the event they won the game comfortably.  Scotland’s reward is that they are up to #5 in the world rankings, 2 points behind Ireland.

With the updated rankings, here are my revised forecasts for round 4. 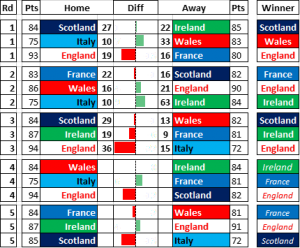 orecasts for rounds 1 to 3 are based on the rankings that existed at that time.  So far, the rankings have correctly predicted 8 out 9 matches with Scotland V Ireland in round 1 the only wrong call but that was predicted to be very close.  For round 4, Wales V Ireland is predicted to be even closer, in effect a draw though by 0.02 points, Ireland are ahead.  Remember that home sides have 3 points added to their rankings for prediction purposes.

Italy V France looks like Italy’s best chance of a win this season.  Two factors they can take heart from is that they beat France in 2011 & 2013 and France have only won 3 of their last 14 away games in the 6 Nations.  France’s last away win was against Italy in 2015 so whilst on paper France are favourites, it might be a closer game than expected.

Finally we have England V Scotland which on paper is a clear win for England.  Then again so were their matches against France and Italy this season and both didn’t go to plan.

The forecasts for Round 5 are based on the rankings as of today but these will change again once round 4 is complete.  The round 5 forecasts should be treated as indicative for now but based on these, we could end up with an England grand slam followed by 3 teams with 3 wins.  At that point bonus points, introduced into the 6 Nations for the first time this season will come into play.

The 2022/23 Women's Super League (WSL) kicks off this weekend in England.  After the Lionesses … END_OF_DOCUMENT_TOKEN_TO_BE_REPLACED

The 2022 UK summer was the 4th warmest & 9th driest on record.  When looked at using principal … END_OF_DOCUMENT_TOKEN_TO_BE_REPLACED

August 2022 was the 4th warmest, 4th sunniest & 10th driest on record.  When looking at average … END_OF_DOCUMENT_TOKEN_TO_BE_REPLACED

UK Inflation has risen sharply since the start of 2022 and dominates the media and politics today.  … END_OF_DOCUMENT_TOKEN_TO_BE_REPLACED

The 5th warmest July on record included a new record temperature of 40.3C on 19th July.  It was also … END_OF_DOCUMENT_TOKEN_TO_BE_REPLACED