So the 6 Nations is underway again and the traditional rivalries are reheated. Who will win is once again on all the sports pages and there are no shortages of pundits willing to give their opinions. If you want a different way to predict what will happen, why not use the World Rugby Rankings?

Ranking tables play a big part in a number of sports but they are not widely understood among sports fans. At bottom though, rankings are intended to be used as a predictive tool for what will happen in a match. A good ranking system will be more accurate in predicting outcomes than a bad ranking system. However, a perfect ranking system is something we don’t want otherwise sport becomes boring as we will always know the outcome in advance. So as a forecasting tool, a ranking system is a curious beast. We want it to be good but not great.

How can rankings be used to predict the 6 Nations? Let’s look at week 1 which saw Scotland beat Ireland in an exciting match, England squeak past France and Wales thump Italy. Based on the World Rugby ranking tables, this is how many ranking points each team had at that time. Note that home teams automatically have 3 ranking points added to their normal ranking points.

The bar in the middle represents the difference in ranking poin

ts between the two teams and points to the team with the higher number of points. The size of the bar gives you an idea of whether a team is a strong or weak favourite.

What I found interesting when I looked at these matches before they were played was that Ireland were being touted as potential Grand Slam winners based on them beating New Zealand (the #1 team in the world) in November last year. Yet the ranking points suggested that whilst Ireland were favourites just, in practice the match was very even which is how it worked out with Scotland pulling ahead in the last few minutes to win 27-22. Wales were clear favourites to beat Italy and in the event had a comfortable 33-10 win. In the end, one could argue that the biggest surprise was England struggling to beat France 19-16 when the rankings suggested a more comfortable win.

Going forward into week 2, World Rugby update the rankings based on the week 1 results and the matchups looked like this. Remember that the home team has 3 points added for home advantage.

Yet again, the rankings predicted a close game in Paris, a somewhat close game in Cardiff and a relatively easy game for Ireland in Rome and the final outcomes were broadly in line with this. As I said earlier, we don’t want the rankings to be perfect but World Rugby do test the predictive power of their rankings and the current method of calculating the rank points is one they are happy with at present.

We can make predictions assuming the ranking points remain unchanged but this is not a valid scenario. I have however gone ahead and done this, more for identifying which matches are predicted to be close ones and in effect decide the championship and which ones can be regarded as foregone conclusions (which is always dangerous in sport!). 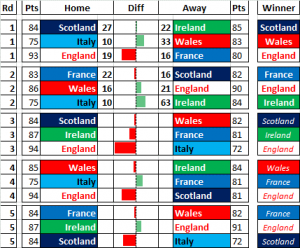 we see that Scotland V Wales, Wales V Ireland and France V Wales are also expected to be very close. Indeed, France/Wales/Scotland form a mini-championship of 3 very close games and the outcomes of those could have a bearing on the overall championship. England are expected to win the Grand Slam but their last match is away to Ireland and nothing can be taken for granted in that. Ireland are favourites against France but they then have 2 close games to finish off the tournament. Finally, Italy look to have their best chance of a win when they play France at home but even then France are favourites so Italy will are staring at a wooden spoon this year.

I will be updating this table as the tournament progresses and it will be interesting to see how the rankings have performed as a forecasting tool by the end.

UK Inflation has risen sharply since the start of 2022 and dominates the media and politics today.  … END_OF_DOCUMENT_TOKEN_TO_BE_REPLACED

Rishi Sunak is the UK's first Prime Minister from a non-white ethnic minority. Did this happen by … END_OF_DOCUMENT_TOKEN_TO_BE_REPLACED

The weather in the UK for October was warmer and sunnier than normal.  Overall we are heading for … END_OF_DOCUMENT_TOKEN_TO_BE_REPLACED

The weather in the UK for September was unremarkable.  Perhaps that is a welcome change after the … END_OF_DOCUMENT_TOKEN_TO_BE_REPLACED

The 2022/23 Women's Super League (WSL) kicks off this weekend in England.  After the Lionesses … END_OF_DOCUMENT_TOKEN_TO_BE_REPLACED