After 3 more matches, world rugby has updated its ranking tables and I can now use these to look the prospects are for each team in the last round of the 2017 6 Nations.  I have explained how the rankings work in an earlier 6 Nations post and it is worth reading that to understand how rankings can be a predictive tool.  Based on the latest rankings, it looks like France and Scotland will end up in the top half of the final table alongside England who are already the 2017 6 Nations champions.

So far, the ranking tables have held up well in 2017.  Of the 12 games played so far, only 2 games were incorrectly called, Scotland’s win in round 1 and Wales’ win in round 4.  In fairness to the rankings, both of thes 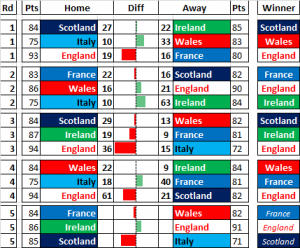 e games were marked as being extremely close and so these wins should not be a surprise.

For round 5, it looks like a comfortable win for Scotland over Italy who have not been close in any of their 4 games in 2017.  The other two games are closer but the rankings suggests wins for England and France which would mean a second successive Grand Slam for England and a top half finish for Scotland & France.  For France, this would be their first top half finish since 2011 which is quite a long time for a country with their pedigree.  Scotland’s last top half finish was in 2013 and before that in 2006 so this has been something of a rare beast for them.

An interesting point to note is how the home teams in round 5 all have very similar ranking points (about 85 which includes the 3 extra points for playing at home).  The differences in expectations come down to the very different number of points for the away sides.

After an entire meteorological year where the temperature above the median for ever single month, … END_OF_DOCUMENT_TOKEN_TO_BE_REPLACED

Sir Donald Bradman is the GOAT (Greatest of All Time) of sporting GOATs.  All cricket lovers accept … END_OF_DOCUMENT_TOKEN_TO_BE_REPLACED