You are here: Home / Elections / UK General Election 2015 #2 – What would the result have been using the d’Hondt election system?

The 2015 General Election surprised many people when the Conservatives unexpectedly won a small majority though I should blow my own trumpet and say it wasn’t quite a surprise for me!  One thing that wasn’t a surprise were complaints about the perceived unfairness of the F 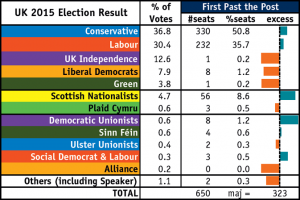 irst Past The Post election system with UKIP joining the Lib Dems with their criticisms.

Using the election results, I decided to see how the results would differ if a different election system had been used.  The system I decided to explore was the d’Hondt system which is one of the most common PR systems in use and is used by the UK in EU elections.

The results of my analysis was published in the Significance magazine and you can see what I wrote in my article “A very different result“.

There are of course other election systems and I plan to write other posts looking at what the results might have been using those.

"I mentioned it once but I think I got away with it!" Basil Fawlty didn't get away with it in … END_OF_DOCUMENT_TOKEN_TO_BE_REPLACED

May 2022 was the 5th warmest May on record in the UK.  Whilst temperatures are rising as the days … END_OF_DOCUMENT_TOKEN_TO_BE_REPLACED

Whilst COVID19 was ravaging the world in 2020 & 2021, I felt there was little point in updating … END_OF_DOCUMENT_TOKEN_TO_BE_REPLACED