We now know the answer to who will win the 2018 6 Nations Championship.  Ireland won the title with a match to spare after England failure against France resulted in my second forecasting error of the championship.  There is still much to play for though in the last week with the main question being whether England do to Ireland what Ireland did to England last year and stop them from winning a Grand Slam.  Whilst I am cheering on England, it is St. Patricks Day and I do have some Irish blood in me so part of me does wish Ireland well.

World Rugby’s goal is that rankings can be used as a predictive tool.  The idea is to take each team’s current ranking and add 3 points to teams playing at home.  Whoever has the higher ranking is

then expected to win but the closer the rankings, the closer the game is expected to be.  The current World Rugby rankings as of 5th March 2018 is shown to the right along with their ranking points and the change (if any) from the previous week.

So far, my success rate is 35 correct predictions out of 43 matches involving 6 Nations teams in the 2017 & 2018 6 Nations and the 2017 Autumn Internationals broken down as follows:- 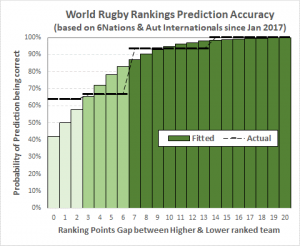 These figures are shown by the black line in the next chart.  It is worth noting that England’s loss to France was the first forecasting error by a team with a ranking point superiority of 7 points of more.  What I did in the chart was build a logistic regression model to estimate the probability that a prediction would be correct given a certain ranking gap and this shown by the green bars (shaded differently for each of the 3 groups above).  Such a model allows me to add an additional feature to my predictions, the chances of my predictions being correct.  It also shows that the apparent perfect record until now for matches with ranking gaps of 7+ points had to break eventually and it would be my team that became the fall guy…

You can see the probabilities of my predictions being correct in the next table (PROB column) which lists my predictions for the 2018 6 Nations along with actual results.  This table shows the ranking points for each team (PTS columns) and the ranking gap in the DIFF column which is highlighted in blue if the prediction was incorrect.  England’s defeat to France and Ireland’s win over Scotland led to Ireland overtaking England in the rankings table but home advantage continues to give England 2.7 ranking point advantage.  However, this equates only to a 58% win probability so at first sight, it looks like this match is a toss up. 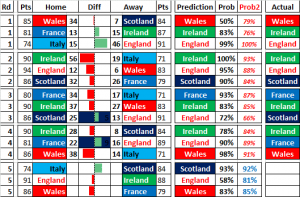 When I look back at the accuracy of my predictions though, it does appear that the threshold for accuracy is a ranking gap of 7 points.  Above, my predictions are near perfect, below that I am right 2 out 3 times.  This suggests that the figures in the PROB column based on the fitted green bars may not be the best model.  Now that I have 46 matches to look at, I decided to look at the correlation between the ranking gap and the actual gap in the scores.  The scatter plot below shows the ranking gap for the stronger team on the horizontal axis and the difference in actual scores between the stronger and weaker 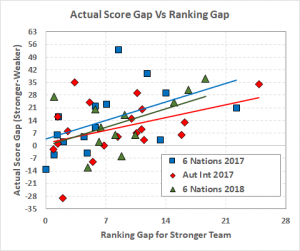 teams on the vertical axis.  Doing it this way means that a negative score is representing a prediction error.

I have highlighted the 3 tournaments separately and added a line of best fit for each.  Both 6 Nations are very similar whilst the line for Autumn Internationals is a little flatter suggesting that large ranking gaps result in smaller score gaps than in the 6 Nations.  I explored this further by building a multivariate regression model and I discovered that the more important factor is actually whether the stronger team is playing at home or away.

As the next chart shows, the difference is quite stark.  When playing at home, stronger teams with a small ranking gap are expected to have a score gap of at least 10 points but if they are playing very weak teams, the expected score 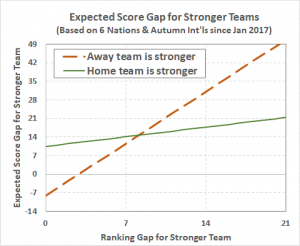 gap is not notably higher.  However, when the stronger team plays away with a small ranking gap, the expected score gap is actually negative i.e. the weaker home team is expected to win. Conversely when the ranking gap is large for the stronger away team, they are expected to really put teams away.

This alternative model does make some sense to me.  There has been quite a bit of talk recently that home advantage is becoming more important in the 6 Nations and this chart would appear to confirm that especially when a slightly weaker team plays at home.  When the stronger team plays at home, it looks like they are a banker to win but can struggle to put away the weaker teams, perhaps because of high expectations that are difficult to deliver.  I have added win probabilities for the stronger team using this model in the PROB2 column in the table above.  Note the 4 completed weeks are shown in red since those matches were used to build the model whereas the blue figures are true predictions.

This alternative model has dramatic implications for the England v Ireland game as it points to England being clear favourites to win and to scupper Ireland’s Grand Slam chances which would be a reversal of last year which was also a prediction error for the basic model.  S

o which model is right?  To help answer this, I looked back at all Grand Slam attempts (whether successful or not) since the 1970s (shown in the table) and counted the success rate for those attempting Grand Slams at home and those attempting away from home.  The years highlighted black were winner takes all encounters and are counted separately with the success of the home team recorded in the table. 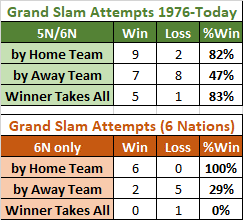 The difference in success rates is very noticeable especially in the 6 Nations era.  What is particularly striking is that all England’s grand slam attempts in the 6N era have been away from home which is in stark contrast to the 5 Nations era under Will Carling when nearly all attempts were at home.  Three times, Ireland were the team thwarting England but they are also one of the two teams to have won a grand slam away from home in the 6 Nations era.  This also puts Wales’ attempts at Grand Slams in context as all of their successes have come at home.

where the ranking gap is greater than 14 points.  This means that I am predicting both Ireland & France will get losing bonus points resulting in a final table that looks like this.  It would also mean that France would have 3 losing bonus points from all 3 of their losses which would have to be regarded as some progress especially given their dire performances in recent years.

The 2022/23 Women's Super League (WSL) kicks off this weekend in England.  After the Lionesses … END_OF_DOCUMENT_TOKEN_TO_BE_REPLACED

The 2022 UK summer was the 4th warmest & 9th driest on record.  When looked at using principal … END_OF_DOCUMENT_TOKEN_TO_BE_REPLACED

August 2022 was the 4th warmest, 4th sunniest & 10th driest on record.  When looking at average … END_OF_DOCUMENT_TOKEN_TO_BE_REPLACED

UK Inflation has risen sharply since the start of 2022 and dominates the media and politics today.  … END_OF_DOCUMENT_TOKEN_TO_BE_REPLACED

The 5th warmest July on record included a new record temperature of 40.3C on 19th July.  It was also … END_OF_DOCUMENT_TOKEN_TO_BE_REPLACED