Ireland’s win over England brought the 2017 6 Nations to a close.  England were crowned champions but were not able to top it with back to back grand slams.  Over the last few weeks, I have been using the World Rugby Rankings to predict the outcome of the matches and now it is time to see how they performed.

The answer is surprisingly well.  Out of 15 matches, the rankings predicted 12 outcomes correctly and 3 incorrectly.  I’ve said before we don’t want a perfect predictive tool in sport otherwise it becomes boring so 80% accuracy is probably about right. 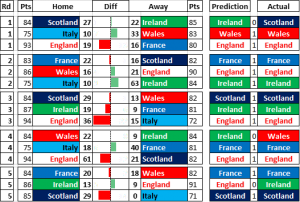 Curiously all 3 matches incorrectly called involved Ireland with Scotland in round 1, Wales in round 4 and England in round 5.  Admittedly both the Scotland & Wales matches were said to be very even with England reasonable favourites.  The question to ask is whether this points to an issue with the Irish team?  Is there something about the Irish team’s preparation or expectations that wasn’t quite right?  This is something that rugby fans can debate.

In my next post, I will look at how the rankings could be used to answer the question over whether there should be promotion or relegation in the 6 Nations.

UK Inflation has risen sharply since the start of 2022 and dominates the media and politics today.  … END_OF_DOCUMENT_TOKEN_TO_BE_REPLACED

Rishi Sunak is the UK's first Prime Minister from a non-white ethnic minority. Did this happen by … END_OF_DOCUMENT_TOKEN_TO_BE_REPLACED

The weather in the UK for October was warmer and sunnier than normal.  Overall we are heading for … END_OF_DOCUMENT_TOKEN_TO_BE_REPLACED

The weather in the UK for September was unremarkable.  Perhaps that is a welcome change after the … END_OF_DOCUMENT_TOKEN_TO_BE_REPLACED

The 2022/23 Women's Super League (WSL) kicks off this weekend in England.  After the Lionesses … END_OF_DOCUMENT_TOKEN_TO_BE_REPLACED