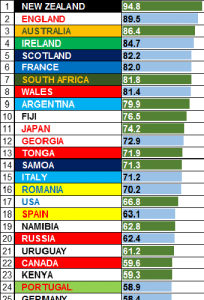 hether promotion and relegation should be introduced.  A lot of people have stated that Georgia have earned the right to play in the 6 Nations and that Italy have failed to make any progress over the 18 seasons they have been in the 6 Nations.  Actually had promotion & relegation been in place this season, Italy would have been relegated and Romania would have been promoted after winning the Rugby Europe Championship with a narrow 8-7 win over Georgia in the last round.  This win ended Georgia’s 6 year winning streak.

Over the last few weeks, I have been using the World Rugby Rankings to predict the winners of this years 6 Nations.  Suppose we could start all over again and used the rankings to design a new 6 Nations tournament with 2 divisions, which teams would be in Division 1 and Division 2?  The table running down the side shows the top 25 nations in the world as of the 20th March 2017.  European teams ranking points are coloured in light blue, the rest of the world are coloured dark green.

You can see that Georgia are now ranked above Italy despite their loss to Romania.  In fact this ranking table includes 12 nations from Europe so let’s extract the European nations and split them into two 6 Nations divisions based on the current rankings. 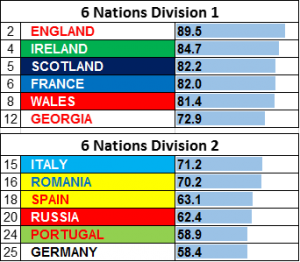 his happened, Italy will be playing the likes of Germany next season.  In football, that would be top billing but I can’t quite see the crowds turning out for the rugby match.  In my opinion, this is the basic problem with the idea of promotion and relegation in the 6 Nations, we would end up with some serious mismatches in both divisions.  There would be a 16.6 point ranking gap between England and Georgia in Division 1 and a 12.8 point gap between Italy and Germany.  I am not convinced that being hammered by 60 points is really going to get the crowds and broadcasters flocking to these matches and I don’t think it helps the game.

This problem would be exacerbated if Italy was not the relegated team.  Over the last six Nations, Italy have finished bottom 3 times, Scotland twice and France once.  Whilst it might be nice for Scotland to get one over Germany at last, I doubt if Scottish fans would seriously celebra 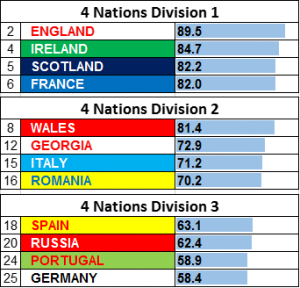 My solution to this is create a championship structure with less likelihood of serious mismatches.  This can be done if we have three 4 Nations tournaments instead with teams playing each other home and away in each season.  This would mean each team playing 6 matches rather than 5 matches but I think the extra competitiveness of the tournaments would make this worthwhile.  The current rankings show that 2018’s 4 Nations tournaments would look like this.

Division 2 now looks like a set of tasty matches attractive enough to broadcasters. Whilst Wales would be favourites to be promoted, all three of their opponents would be capable of overturning Wales once and perhaps making their promotion harder than expected.

Division 1 would of course be highly competitive and I think Grand Slams would become much harder.  Of course this means that one of those 4 teams will be relegated in 2018 and will have to play in Division 2 in 2019.  But as I say, whilst they would be favourites to be promoted, they would face a few banana skins and the matches should be competitive enough.

If this was implemented now, I would have no problem with ringfencing Division 2 for a world cup cycle and not having promotion and relegation between Divisions 2 & 3.  Romania and Georgia deserve the chance to strengthen their credentials to be regulars in Division 1 and the sides in Division 3 could focus on improving their skills and crowd levels until they reach a point when they are ready to be promoted to Division 2.

If you agree with my thoughts then let me know but most importantly let the 6 Nations organisers know.

UK Inflation has risen sharply since the start of 2022 and dominates the media and politics today.  … END_OF_DOCUMENT_TOKEN_TO_BE_REPLACED

Rishi Sunak is the UK's first Prime Minister from a non-white ethnic minority. Did this happen by … END_OF_DOCUMENT_TOKEN_TO_BE_REPLACED

The weather in the UK for October was warmer and sunnier than normal.  Overall we are heading for … END_OF_DOCUMENT_TOKEN_TO_BE_REPLACED

The weather in the UK for September was unremarkable.  Perhaps that is a welcome change after the … END_OF_DOCUMENT_TOKEN_TO_BE_REPLACED

The 2022/23 Women's Super League (WSL) kicks off this weekend in England.  After the Lionesses … END_OF_DOCUMENT_TOKEN_TO_BE_REPLACED