The 2018 6 Nations begins tomorrow and fans will be looking forward to a feast of rugby for the next two months.  As always, pundits galore are making their predictions and the one thing we can count on is that some will have egg on their faces by the time it is over.  In 2017, I used World Rugby’s Rankings to predict who would win each match in the 6 Nations and the Autumn Internationals and these predictions worked out well with 12 out of 15 6 Nations games and 15 out of the 19 Autumn International matches involving 6 Nations teams correctly called.

World Rugby’s goal is that rankings can be used as a predictive tool.  The idea is to take each team’s curre

nt ranking and add 3 points to teams playing at home.  Whoever has the higher ranking is then expected to win but the closer the rankings, the closer the game is expected to be.  The current World Rugby rankings as of 7th December 2017 is shown to the right along with their ranking points and the change (if any) from the previous week.

In 2017, I used these rankings to predict 27 out 34 games involving 6 Nations teams correctly.  The full set of predictions is shown below starting with the 2017 6 nations where 12 out of 15 wer

e correct.   This table shows the ranking points at the time (adding 3 for home teams) next to each team and the difference between these in the middle (Diff column).  The final match score is shown next to the Diff column.  The 3 incorrect predictions are shown by blue cells in the Diff column and of these, two were expected to be very close and the 3rd was England’s unsuccessful attempt to wrap up winning the championship with a Grand Slam.

The predictions for the 2017 Autumn Internationals are shown in the next table where 15 out of 19 were correct.  Again the blue cells in the Diff column indicate the

4 incorrect predictions and of these, two were again expected to be very close matches involving Scotland & Wales.

Now that we have 34 matches to look back on, I thought it was worth examining the accuracy in more detail.  I grouped the matches into 3 groups as follows:- 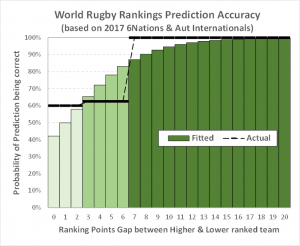 You can see these probabilities in the next table which lists my predictions for the 2018 6 Nations.  As always, it is only week 1 that can be counted as a true prediction with the other weeks treated as indicative for now.  This is because World Rugby will update the ranking points after each week which of course will lead to different predictions.

ck up their demolition of Australia in November with a challenge for the 6 Nations title.  It has been a while since Scotland could be considered contenders and at first sight the predictions in this table are discouraging with only 2 wins predicted.  But this is where the win probabilities come into play as all 3 defeats come from 3 very close games where Scotland still have a distinct chance of winning.  Indeed the ranking gap for their first game is less than 1 point and so far, all 3 games in 2017 where the gap was less than 1 point were incorrectly called.  The Wales v Scotland game gets the 2018 championship going and I am certainly looking forward to it.

That aside, these predictions are pointing to an England v Ireland grand slam decider in the last week.  Of course we now have bonus points as well and whilst I have no grounds for predicting bonus points, I have constructed a provisional league table with the following system.  Where the ranking gap is less than 7 points, the expected losing team gets a losing bonus point and where the ranking gap is 14 points or m

UK Inflation has risen sharply since the start of 2022 and dominates the media and politics today.  … END_OF_DOCUMENT_TOKEN_TO_BE_REPLACED

Rishi Sunak is the UK's first Prime Minister from a non-white ethnic minority. Did this happen by … END_OF_DOCUMENT_TOKEN_TO_BE_REPLACED

The weather in the UK for October was warmer and sunnier than normal.  Overall we are heading for … END_OF_DOCUMENT_TOKEN_TO_BE_REPLACED

The weather in the UK for September was unremarkable.  Perhaps that is a welcome change after the … END_OF_DOCUMENT_TOKEN_TO_BE_REPLACED

The 2022/23 Women's Super League (WSL) kicks off this weekend in England.  After the Lionesses … END_OF_DOCUMENT_TOKEN_TO_BE_REPLACED