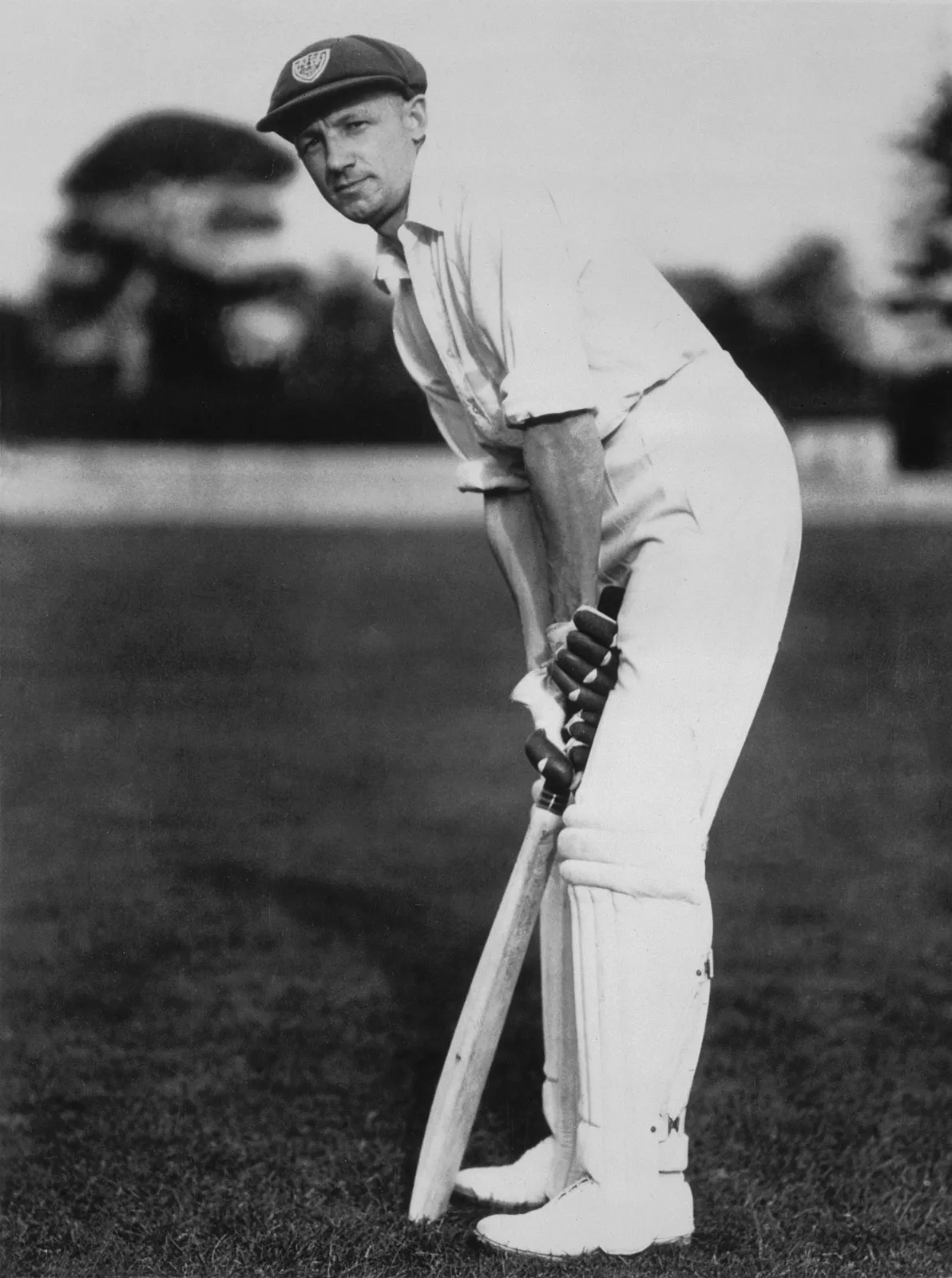 Bradman played 52 test matches for Australia between the years of 1928 and 1948.  Over those matches he batted 80 times, was dismissed 70 times and scored a total of 6,996 runs.  A cricketer’s batting average is the number of runs scored divided by the numbers of dismissals so Sir Donald Bradman ended his career with an average of 99.94 (=6996/70).  Famously, he only needed 4 runs in his very last innings against England at the Oval to end his test career with a batting average of 100 but the entire cricketing world was stunned when he was bowled second ball for a duck.  What is less well known is that Australia beat England by an innings in that match but had Australia batted again, Bradman may well have achieved this stunning feat.

Over his 80 innings, he scored 29 Centuries (36% of all innings) making him the only test batsman to score a century in at least 1/3 of his innings.  In addition, he scored 13 Fifties which meant he scored 50+ runs in over half of his innings (42 or 53%), again the only test batsmen in history to do so.  His 12 Double Centuries have yet to be surpassed with only Sangakkara coming close with 11 doubles in 3 times as many innings.  Finally, Bradman is one of only 4 test batsmen (Sehwag, Gayle & Lara being the others) to score 2 Triple Centuries and could have been on his own with 3 had he not run out of partners when 299 not out in a match against South Africa.

He faced England in 65 of his 80 innings with the remainder spread evenly across series with India, South Africa and the West Indies.

It’s obvious Bradman is the GOAT (Greatest Of All Time) when it comes to test batting but just how much better was he compared to his peers? 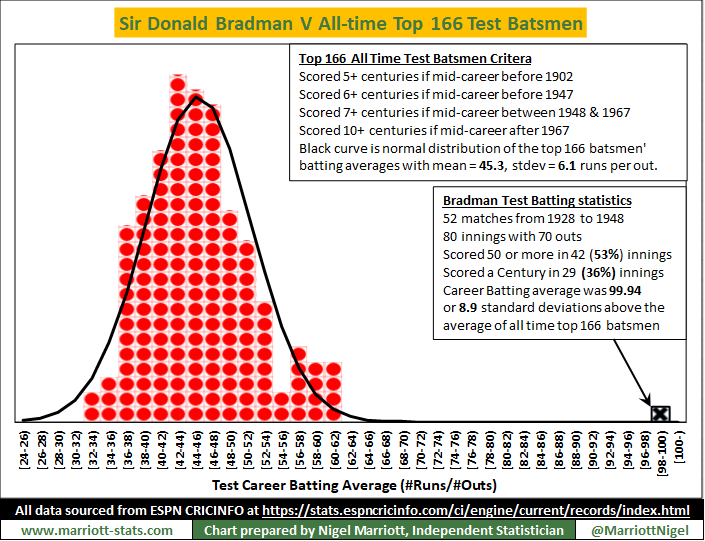 The chart here shows the distribution of batting averages of the next best 166 batsmen is close to a normal distribution, perhaps with a slight positive skew.  This means Bradman’s average of 99.94, differing from the next 166’s average of 45.3 by 8.9 times the next 166’s standard deviation of 6.1 runs, can be interpreted in terms of a normal distribution.  On that basis, to be 9 standard deviations better than the best of the rest (note not all batsmen, just the best) is out of this galaxy let alone this world.  Is there any other sports person that comes close to standing out like this?

Who are the Top 167 Test Batsmen of all time?

The full list of the top 167 test batsmen I chose to use in this analysis can be downloaded here in Microsoft Excel format.

All data was downloaded from ESPN’s Cricinfo database and the downloadable spreadsheet gives you instructions on how you can download the data yourself from ESPN’s site.  The data I’ve used here is up to date as of the end of 2022 and the 167 batsmen I’ve included account for 5% of all 3,123 men to have ever played test cricket.

I spent many hours trying to identify the best of the rest for this blog.  In the end, I decided the mark of a top class test batsmen is they score centuries and the mark of a top class test bowler is they take 5-Wicket hauls (I will be writing a separate post about the top test bowlers of all time).  From this I arrived at a simple criteria whereby any batsman who scores at least 10 test centuries in their career is a top class test batsman.  This criteria has the advantage of excluding batsmen with short careers who were hot for a couple of years.  139 batsman have achieved this feat since the first ever test match in 1877 but where did I get the other 28?

You may have noticed earlier that Bradman’s career spanned 21 years and consisted of only 52 matches.  Obviously, 6 years lost to World War Two didn’t help but this still only works out as an average of 3.5 ( =52/(21-6) ) matches per year for Bradman.  These days, plenty of players reach 100 matches in 10 years but of course they are helped by widespread air travel around the globe.  This was not an option in Bradman’s day when teams travelled by boat.  From my readings, it looks like the first time a team flew to its destination was around 1960. 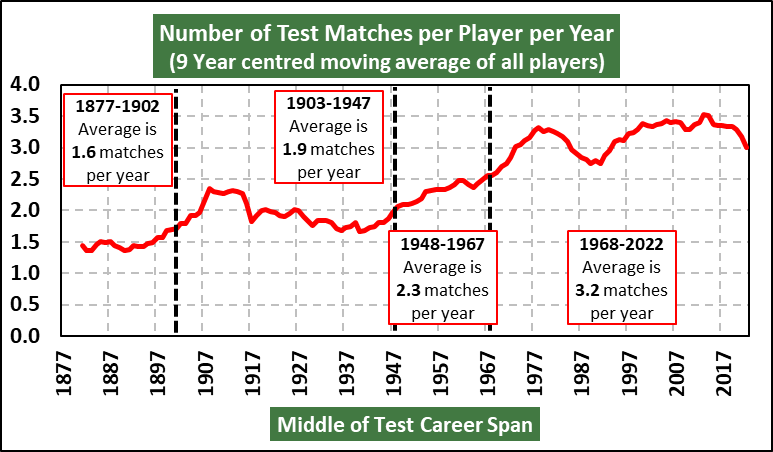 The above chart shows the trend in the average number of matches per year a test cricketer can expect to play during their career.  The horizontal axis is the midpoint of a player’s career which in Bradman’s case was 1938 (halfway between 1928 & 1948).  That puts him firmly in the Inter-War era when players could expect to play just under 2 matches a year so Bradman was clearly above average for this era.  However, for the modern era from the late 60s onwards, Bradman’s experience is now the norm.

To be fair to players from the earlier three eras, when global travel was by boat and there were fewer test playing nations, my criteria of at least 10 centuries only applies to the modern era from 1968 onwards.  For the earlier eras, I prorated the threshold of 10 by the average number of matches per year as shown in the chart above to arrive at the following thresholds –

Using these thresholds, I arrive at 167 top class batsmen including Bradman broken down by era as above.  One reason why I defined the modern era to start in 1968 was to be fair to South African cricketers before 1970.  Due to apartheid, South Africa was kicked out of test cricket then which shortened the career of some very strong players. 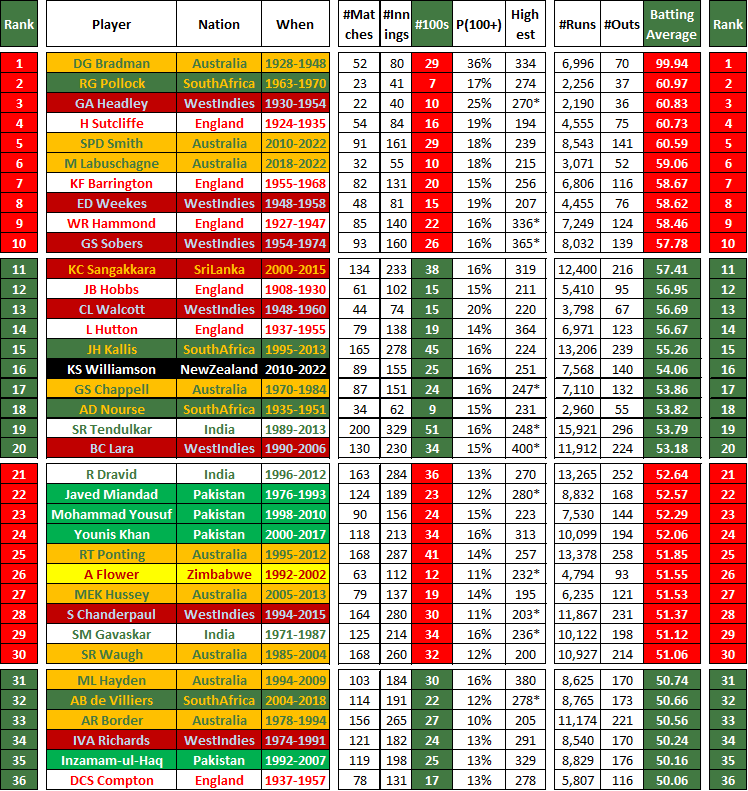 How did Bradman manage to be 9 standard deviations better than his peers?  The best way to answer this question is to compare him with the English batsman Herbert Sutcliffe whose career (1924-1938) overlapped with Bradman’s (1928-1948).  Sutcliffe played a similar number of innings (84) to Bradman (80) and he is number 4 in the all time list above for test career batting average.  More than that Sutcliffe came closest to repeating Bradman’s feat of scoring 50+ runs in at least half of his innings.  As the chart below shows, Sutcliffe (46%) was 3 standard deviations and Bradman (53%) was 4 standard deviations above the overall average of 30% so clearly both were outstanding test batsmen. 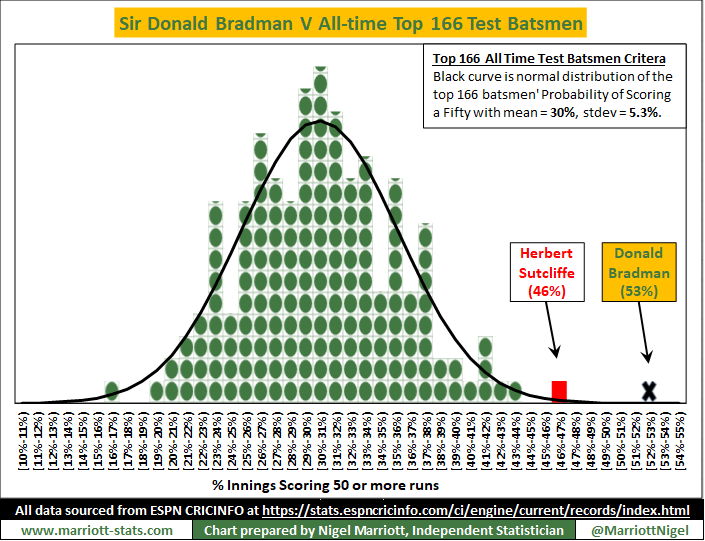 Both had similar records in getting to their Fifty.  The difference came afterwards.  Sutcliffe went on to convert only 16 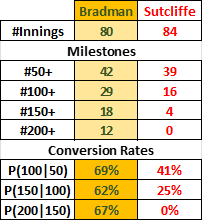 Sutcliffe however, only converted 25% of his 100s into 150s and never scored a double hundred which suggests an inability to really punish the bowlers.  Remember Sutcliffe was no slouch, he had the 4th best test career batting average of all time, the best ever for an English player and was second only to Bradman in scoring Fifties.  It is the gulf between their conversion rates that explains why Sutcliffe was only(!) a 2.5 Sigma GOAT and Bradman was an unsurpassable 9 Sigma GOAT.

Please do leave your comments on these LinkedIn and Twitter threads.

After an entire meteorological year where the temperature above the median for ever single month, … END_OF_DOCUMENT_TOKEN_TO_BE_REPLACED

Sir Donald Bradman is the GOAT (Greatest of All Time) of sporting GOATs.  All cricket lovers accept … END_OF_DOCUMENT_TOKEN_TO_BE_REPLACED