My official prediction using my Final Election Model is that the Conservatives will make a net gain of 45 seats resulting in a working majority of 105 seats.

My forecast uses data from my latest UK Opinion Poll Tracker and it is worth reading that post in conjunction with this post.  At the bottom of this post is a spreadsheet containing my prediction for each seat.  I am basing all figures in this forecast on the assumption that Conservatives will have a 9.5% lead over Labour on June 8th.  I arrive at that figure by taking the current CON-LAB lead of 7% in the latest polls and adding an expected 2.5% underestimate in the Conservative lead over Labour based on my analysis of historical polling errors.  A knock-on effect of this assumption is that I expect turnout to be 2pts higher at 68%.

My Prediction for the 2017 General Election 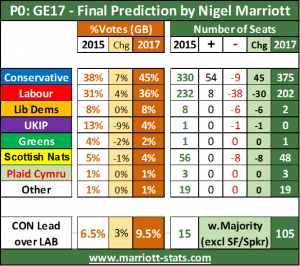 Table P0 shows that the Conservatives will gain 54 seats and lose 9 seats to end up 375 seats, exactly 100 seats more than all other parties combined.  Since the Speaker does not vote and the 4 Sinn Fein MPs do not take their seats in parliament, this means the working majority for the Conservatives is actually 105 seats.

Until now, I have not really been forecasting any gains for Labour but the recent narrowing of the CON-LAB lead is starting to penetrate into Tory territory in the South.  However, their gains there are more than outweighed by their losses elsewhere.  Table P1 shows that the Brexit dynamic underpinning my forecast will see Labour losses in Wales, North and Midlands.  The upshot would be that Labour would end up with their lowest number of seats since 1935, worse than the 209 seats they won in 1983.

Chart P2 shows the expected map for 2017 which can be compared with 2015 & 2010.  The Lib Dems would be wiped out in England with both Tim Farron and Nick Clegg losing their seats to the Conservatives & Labour respectively.  The Conservatives would also unseat the leader of the SNP in the Commons by taking the seat of Moray. 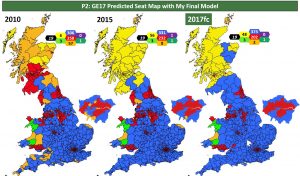 Practically the entire net gain of 45 seats for the Conservative gains will come from Labour-Leave seats as shown in table P3.  This reflects the Brexit realignment effect I talked about in a recent post. 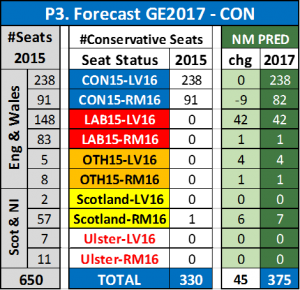 Please click on the link below to download an Excel spreadsheet of my seat by seat forecast.  This spreadsheet now includes the expected vote shares for each party in each seat using my Final Model.  The expected winners for my earlier 4 models are shown for reference but I recommend only the Final Model (marked by the GE17 column) is used.

EDIT Weds 7th June @10.30AM:  I discovered a small bug in my EU16R model which affected extreme Leave/Remain seats.  It knocked out 2 projected CON gains so the data in the spreadsheet now shows 373 seats for CON and 204 seats for LAB.  The change is small enough that I am not changing my official forecast as stated in this post and in my YouTube links.  However, I know that many people intend to use my spreadsheet on election night to track results as they come in.  If so, you need to use the corrected version of the spreadsheet in this link as the previous version may contain misleading vote shares in extreme leave/remain seats.

To accompany my forecast, I have created 4 youtube video clips where I dig into the details of how I arrived at that forecast.

"I mentioned it once but I think I got away with it!" Basil Fawlty didn't get away with it in … END_OF_DOCUMENT_TOKEN_TO_BE_REPLACED

May 2022 was the 5th warmest May on record in the UK.  Whilst temperatures are rising as the days … END_OF_DOCUMENT_TOKEN_TO_BE_REPLACED

Whilst COVID19 was ravaging the world in 2020 & 2021, I felt there was little point in updating … END_OF_DOCUMENT_TOKEN_TO_BE_REPLACED