Welcome to my first post tracking what the opinion polls are saying in the UK.  I will be updating this every month with my comments.

The first chart shows the monthly trends since May 2010.  The lines are the opinion polls which are based on centred 9-poll rolling averages.  For each month a vertical bar shows by how much the 9-poll average has varied in that month.  The square blocks are the vote shares seen in General Elections, the circles are projected national shares from local elections.  All data comes from UK Polling Report and Mark Pack’s database. 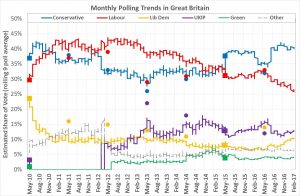 The most notable thing about this chart is how well placed the Conservatives are nearly two years into this parliament.  This is in contrast to the same point after the 2010 election when they were behind Labour.  The other notable point is that Labour’s decline has been more or less continuous since their high point in May 2012 when their 9-poll average was 43.8%.  Currently their 9-poll average is 26.4% which is a fall of 17.2%.

The next block of charts provide more detail on the changes in party fortunes since the 2015 general election.  Most of these charts are based on YouGov polls only since they are published weekly which allows me to aggregate the regional & party breakdowns over a 5 week period. 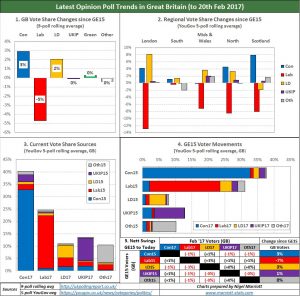 My comments on each chart are:

Using the regional swings as indicated in chart 2, I have predicted the number of seats each party would gain or lose if a general election were held today assuming uniform swing within each region.  The current polls suggest that the Conservatives would increase their working majority from 17 seats to 97 seats.  The biggest gains would come in the North, Midlands and London.

"I mentioned it once but I think I got away with it!" Basil Fawlty didn't get away with it in … END_OF_DOCUMENT_TOKEN_TO_BE_REPLACED

May 2022 was the 5th warmest May on record in the UK.  Whilst temperatures are rising as the days … END_OF_DOCUMENT_TOKEN_TO_BE_REPLACED

Whilst COVID19 was ravaging the world in 2020 & 2021, I felt there was little point in updating … END_OF_DOCUMENT_TOKEN_TO_BE_REPLACED