This is my first opinion poll tracker post since the General Election on 8th June 2017.  Nearly 5 months have passed and only now can we say that politics is starting to move on from the election.  I thought it was worth updating this post to see what current voting intentions are but this will not be an in depth post compared to earlier posts.

Since the election, Labour has been leading the Conservatives in the polls by 2% or so.  This is mostly due to defections by some Conservative voters other than that, voter movements have been minor.

Chart G1 shows the Conservatives have slipped back since the 2017 election and Labour now has a 2% lead in Great Britain.  The most striking thing about G1 is the quite extraordinary recovery in the Labour vote from mid-April 2017 when the election was killed.  Understanding why this happened is key to making sense of the 2017 election and what is likely to happen next.  I have to say that from what I have read from political commentators, no-one has yet made sense of this dramatic surge.  For myself, I keep coming back to a comment I made to my wife (who is American) that the election was starting to remind me of the Democrats primary battle in 2016 between Hillary Clinton and Bernie Sanders and I do feel that the two elections share a similar dynamic. 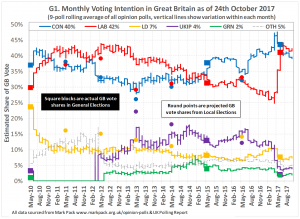 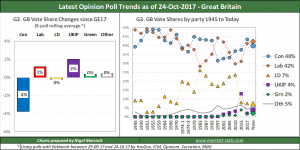 The 2017 General Election saw the elimination of class as a predictor of voting intentions but age become a more distinct differentiator between the parties.  I will keep an eye on demographics in the polls and at some point I will update this section.

"I mentioned it once but I think I got away with it!" Basil Fawlty didn't get away with it in … END_OF_DOCUMENT_TOKEN_TO_BE_REPLACED

May 2022 was the 5th warmest May on record in the UK.  Whilst temperatures are rising as the days … END_OF_DOCUMENT_TOKEN_TO_BE_REPLACED

Whilst COVID19 was ravaging the world in 2020 & 2021, I felt there was little point in updating … END_OF_DOCUMENT_TOKEN_TO_BE_REPLACED