My latest UK weather tracker shows that December 2017 was the only month of 2017 to set a new UK weather record with the lowest rain intensity recorded in December.The meteorological year starts in December which is why December appears as the 1st data point in the charts below.  More information on the layout of the charts can be found in this post.  I have made a small change in the chart format with points lying between the upper and lower deciles being denoted by open black circles and points lying between the decile and minimum/maximum remaining as solid circles.  Any month with a new record is denoted with solid black squares. 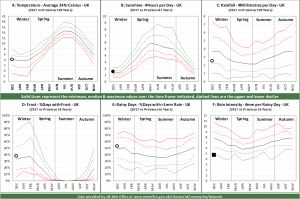 For the first time in 2017, we indeed do have a black square indicating a new record!  The intensity of rainfall in December was the lowest on record (only just) for a December so perhaps that is some comfort on what is normally a cold month that marks the start of the meteorological winter.  The chart shows that this was the result of low rainfall combined with normal number of rainy days so basically what rain we had in December was showery.

A further crumb of comfort is that sunshine was the 8th highest on record.  Otherwise, temperatures & frost days were entirely in line with the long term average.

December marks the start of the 2022 meteorological year and it was very grey, dull and boring. … END_OF_DOCUMENT_TOKEN_TO_BE_REPLACED

Will there be any football this Christmas?  The Omicron variant of COVID19 is wreaking havoc with … END_OF_DOCUMENT_TOKEN_TO_BE_REPLACED