The 2022 Six Nations (Men’s) ended with France beating England to win their 1st Grand Slam and 6 Nations title since 2010.  Ireland ran them close scoring 24 tries in all (joint 2nd highest on record) and Italy won their 1st game in 36 matches in dramatic fashion in Cardiff.  England, Wales and Scotland all disappointed their fans and have questions to answer.

This was France’s 6th title and 4th Grand Slam.  Italy were bottom yet again but avoided a whitewash. 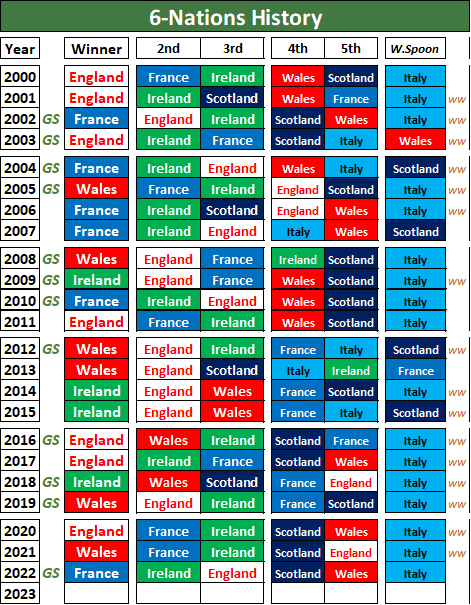 England continue to top the all time table in all metrics bar Grand Slams after 23 seasons and 115 games.  Ireland are close to overtaking them though and France are closing the gap.

Note the Points column excludes Bonus Points and is calculated as 4 points for a win, 2 for a draw and none for a loss.  The For, Against, Tries & Boot (points from) columns are all averages per game.

This table is the order I will review each nation’s 2022 performance by comparing it with how they performed in the previous 22 seasons between 2000 & 2021.

England upset their fans by claiming they had made “progress” even though they had their 2nd successive losing season.  I suppose 3rd place is better than 5th and a return to a winning scoreline of 20-19 after their 1st ever losing scoreline of 22-24 counts as “progress” but really?! 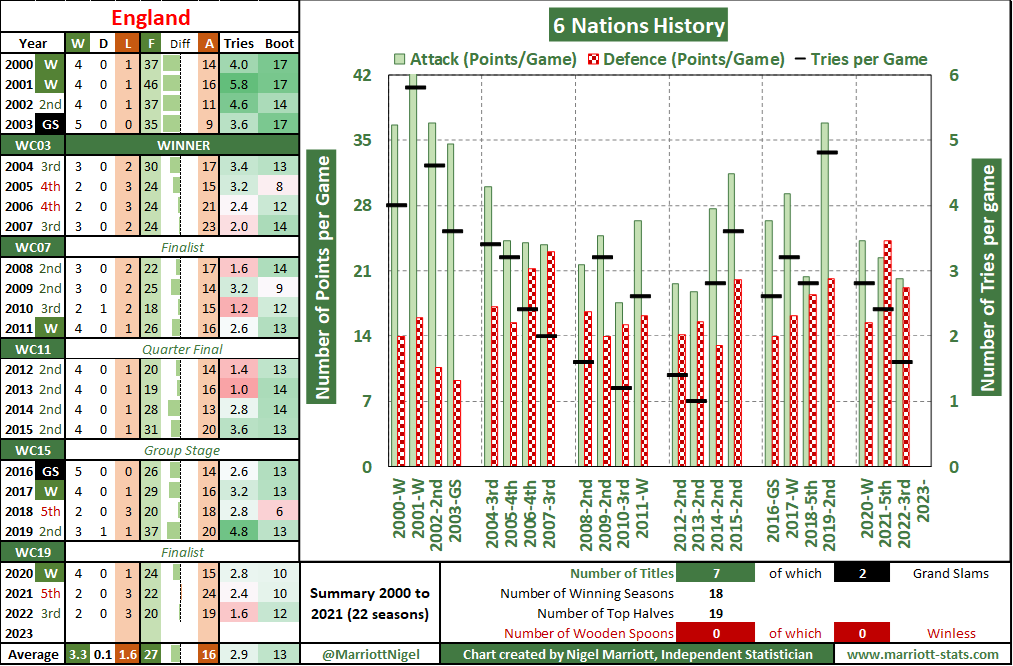 2022 was England’s 5th losing season in the history of 6 Nations and the third under Eddie Jones.  Of far greater concern is their attack where they are clearly going backwards with only 8 tries, the 1st time their 6 nations campaign has ended with a try count in single figures since 2013.  Their defence improved following their worst ever defensive season but without a major turnaround in attack, England can forget about winning titles let alone World Cups.

Ireland’s 2nd place maintains their status as the nation with the most top-half placings with 21 out of 23.  They also recorded their 20th winning season, the most of any nation.  They have just not quite been able to translate that consistency into titles and Grand Slams. 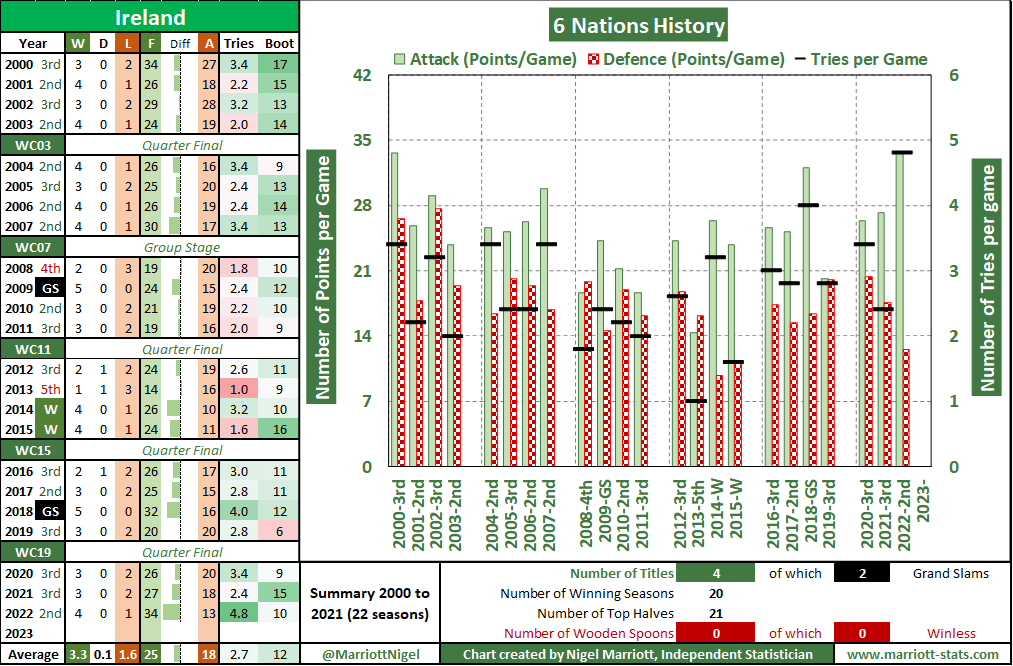 Last year I noted that Ireland’s defence was very consistent and if they could score more tries, they would win more titles.  In 2022, the sporting gods decided to mock me as Ireland’s defence was even better, matching that of their title winning sides in 2014 & 2015 and they scored their highest ever number of tries, 24 in all which is the joint 2nd highest in 6 Nations history (England scored 24 in 2019 & 29 in 2001).  Yet they didn’t win!  I think in all fairness had this been an odd numbered year with Ireland playing France in Dublin, this would have a been an Irish Grand Slam.  If I were Ireland, that is the goal I would set for 2023, Grand Slam or bust.  This is especially important given Ireland’s woeful record in World Cups where they have never reached the semi final stages.

France’s 1st Grand Slam since 2010 cements their progress since the last World Cup.  Given the 2023 World Cup is on home soil, they can look forward to that with justified confidence especially since this team can get better. 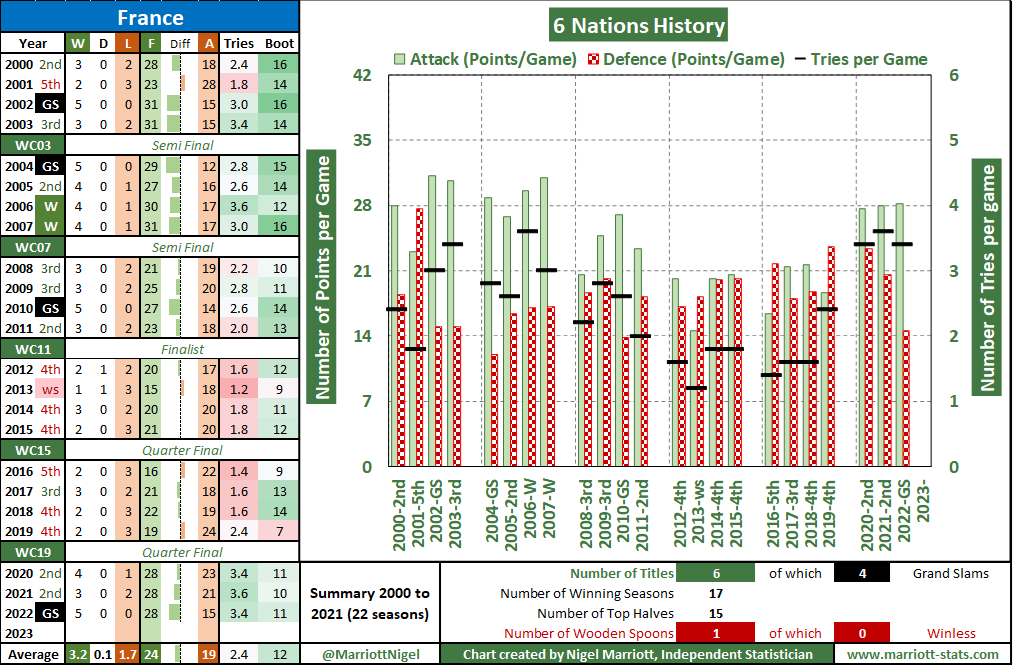 I have to repeat what I said last year for France –

“In terms of points & tries, France are now matching the Bernard Laporte reign of 2000-2007 when France won 4 titles including 2 Grand Slams.  However, their defence is not yet back to that standard.  If they can find a way to concede 1 converted try fewer going forward, and with Shaun Edwards in place it should be possible, then they are going to win titles again.  If they want to be challenging for the World Cup in 2023, then England’s history tells France they need to set new try scoring records as well.”

In 2022, France delivered the improved defence matching that achieved by the 2002, 2004 & 2010 Grand Slam teams.  Their attack though was identical to the last 2 seasons so this tells me France’s goal for 2023 has to be more points in attack from more tries whilst maintaining their defensive standards.  The fact that they will have to play Ireland in Dublin next year means winning back to back Grand Slams (which has not yet happened in the 6 Nations era) may be a step too far but provided they set new records in their attack, I think they will be on course to be a genuine contender for the 2023 World Cup.

Wales ended up 5th and arguably could have been whitewashed after a narrow win over Scotland in Cardiff.  In doing so, they were merely following the Welsh tradition of following up previous 6 Nations triumphs with crap (see 2006, 2009, 2020). 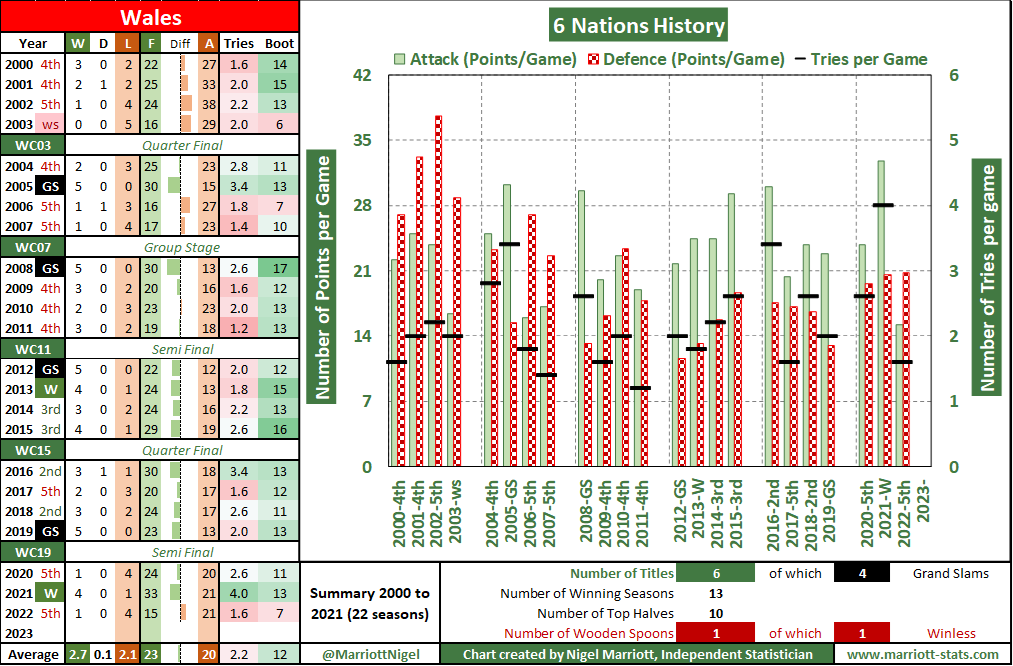 The difference between 2021 & 2022 was clearly the Welsh attack which only scored 8 tries after scoring a new Welsh record of 20 in 2021.  So which is the real Wales, the 2021 or the 2022 edition?  Last year I stated “the points and tries scored in 2021 speak of a team with a strong attack so that’s why I say 2020 should be regarded as an aberration reflecting a strong team in transition“.  This year, I haven’t got a clue!

In fact when I look back to the all time table, one can’t but conclude that Wales have probably been the luckiest side in terms of titles won.

I suspect this has blinded Wales to the weakness of their club sides and perhaps that is a better indication of the relative strengths of the national teams?  Bear in mind England normally field 12 teams and France 14 teams in the two competitions (Champions Cup & Challenge Cup) so in this table we should be comparing Wales 4 teams with Ireland’s 4 teams and Scotland’s 2 teams.  The bottom line is Wales know they what they need to do to win titles, the question is which version will show up in 2023. 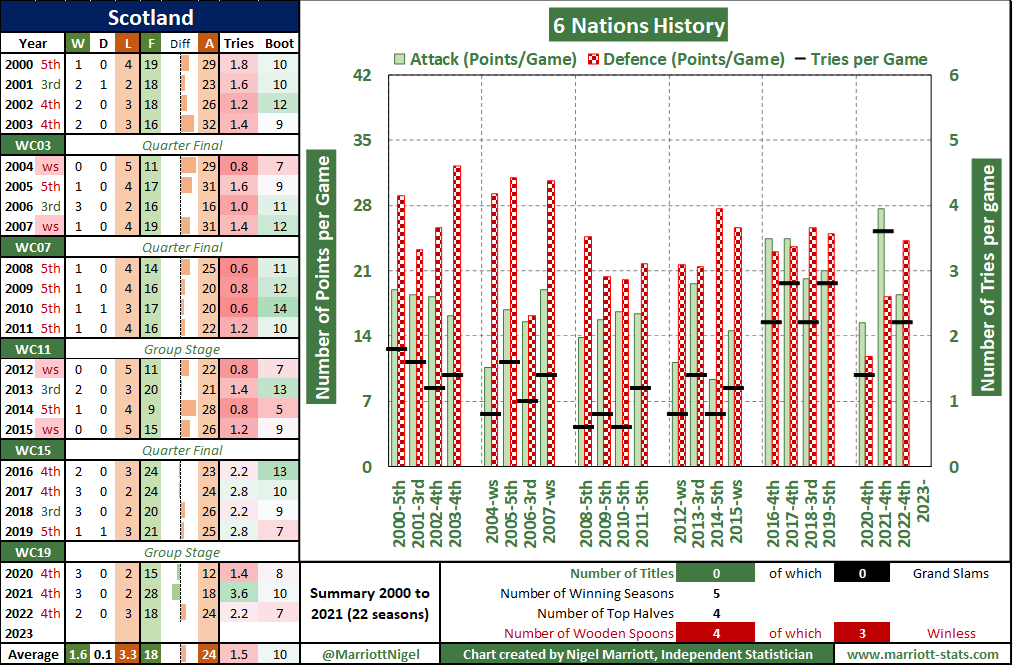 Given their woeful record between 2000 & 2015, Scotland need to use the last 6 years as their comparator for measuring progress.  On this basis, their attack slipped a bit in terms of try scoring and also with the boot but I have no doubt they can rectify this and maybe return to the standards they set in 2021.  The far greater concern is their defence which regressed to the levels seen between 2000 & 2019.  I noted last year that teams have been able to win titles with a defence that concedes 15 points a game on average so the challenge is for them to return to those standards (“9 points fewer” should be the mantra) if they want to continue to have winning seasons, top half finishes and even titles.

Italy finally ended their 6 Nations search for a win with a dramatic last minute try against Wales in Cardiff.  It was their 3rd ever victory over Wales in the 6 Nations and their first win in Cardiff. 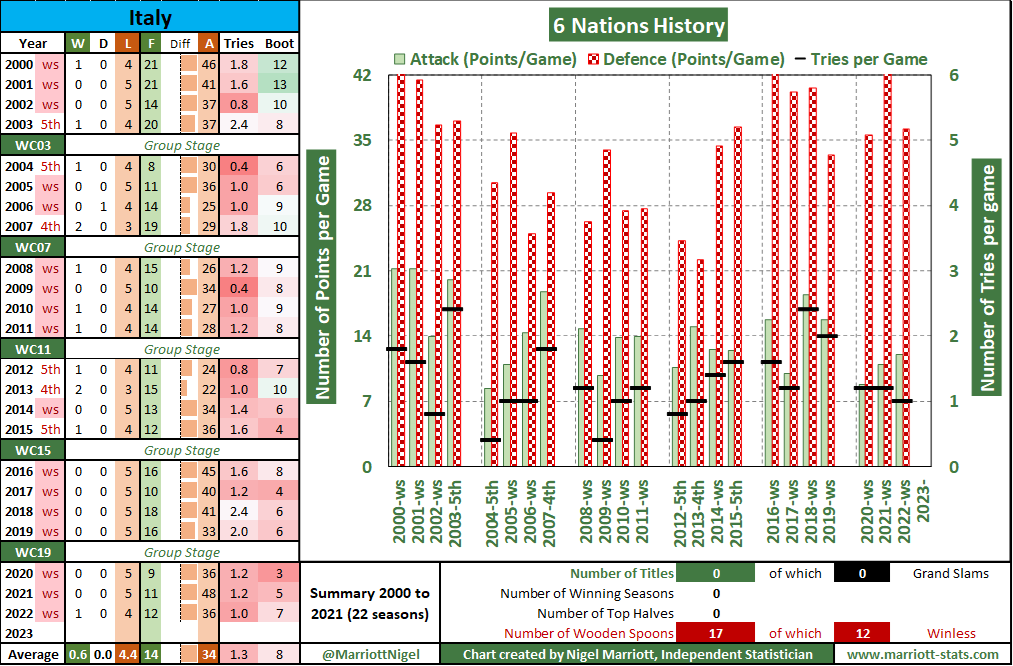 Last year, I said it was time Italy were relegated from the 6 Nations.  The stats in the table above show that despite their win, no visible progress is apparent.  However, what has been little reported on is the 2022 Under-20 6 Nations tournament where Italy had their 1st ever winning season, beat England for the 1st time ever and but for a lack of bonus points would have been in 3rd place.  That points to a potential pipeline of talent that might transform their fortunes just like the U20s transformed France’s.  2023 will give us a clue as to whether this is happening but the 1st step must be to banish whitewashes.

France & Ireland are clearly on track to be competitive at the 2023 World Cup and should be the ones slugging it out for next year’s 6 Nations,  England, Wales & Scotland have regressed and have work to do.  Italy must not get carried away but they at least have something to build on.

If you would like to receive notifications from me of news, articles and offers relating to elections, please click here to go to my Newsletter Subscription page and tick the Sport category and other categories that may be of interest to you.  You will be able to unsubscribe at anytime.

It was a warm and sunny March this year in the UK.  In fact it was the 2nd sunniest March on record. … END_OF_DOCUMENT_TOKEN_TO_BE_REPLACED