You are here: Home / Forecasting / COVID19 Summary #1 – Is the UK an outlier internationally?

The COVID19 pandemic is not yet over but with vaccinations starting to ramp up worldwide, an end may be in sight.  At that point, an in-depth comparison of countries is likely to take place.  To get ahead of that debate with the respect to the UK, I have been comparing the UK’s COVID19 statistics with a number of countries to see how much of an outlier the UK has been.

I plan to update this post every month.  You can follow me on Twitter to see when I have made updates or subscribe to my newsletter (subscription form can be found on the right hand of your screen by scrolling down or at the end of this article).

This post uses an updated format of the available data.  You can find my previous format here which has data as of end of February 2021.

Where I got the data

Our World in Data (OWID) have produced this fantastic resource for tracking global COVID19 data.  There is an interactive chart facility that reproduces many of the charts I show in this post and at the bottom of that chart is a DOWNLOAD option to get the data in a CSV file.

What comparisons have I made?

For ease of visual appearance, each chart compares the UK with 4 other countries.  The full list of comparison groups are:-

If you would like me to show other comparison groups, please let me know.

In each comparison group, 7 charts are shown comparing Deaths, Excess Mortality, Cases, Tests, CFR, Positivity & Vaccinations.  All data is presented per capita with Cases, Tests & Vaccinations per thousand population and Deaths & Excess Mortality per million inhabitants.  In all charts I have set the vertical scale to be about twice the UK peak so as to provide a common visual reference.

The following definitions should be noted.

Unfortunately there are differences between countries in terms of the definitions they use for the above measures.  For this reason, I’ve decided that any nation that is within a factor of 2 of the UK’s figures will be regarded as to all intents & purposes the same as the UK.  Those countries that differ from the UK by more than a factor of 2 will be highlighted.

The charts below compare the UK (bars) with the following 4 countries (lines); Ireland, France, Belgium, The Netherlands. 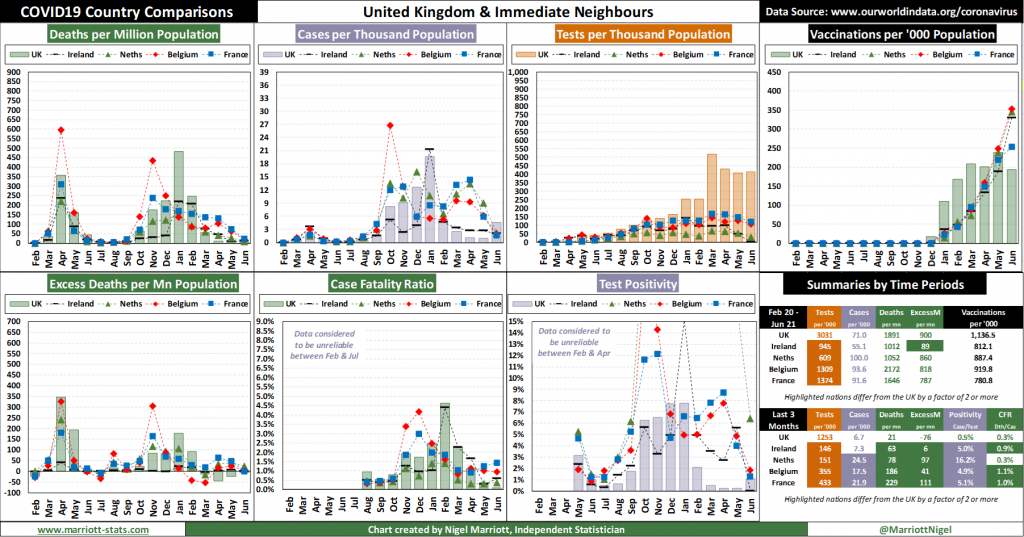 When looking at the data overall since the start of the pandemic, all 5 countries are essentially the same with any difference a matter of degree rather than magnitude with one notable exception.  When one looks at the last 3 months, the UK notably differs.

Since this is the first time I have presented excess mortality statistics in this post, I want to comment further on Ireland’s figure.  Excess mortality is calculated as the difference between all deaths and an expected number of deaths or baseline.  The most common baseline used in the average of the 5 years 2015 to 2019 which precede the pandemic.  It should be obvious from such a crude measure that excess mortality will fluctuate within a range in non-pandemic years and based on what I have seen, anything within +/-50 deaths per million per month will have been seen before and cannot be regarded as unusual.  Even a figure within +/-100 should not be thought of as exceptional.

So to see Ireland never exceed this threshold at all during the pandemic really surprises me.  It’s even more surprising when you see the total number of COVID19 deaths per million of 1,000 is the same as the Netherlands yet the Dutch excess mortality is the same as the UK and other 3 nations.  In the case of the Netherlands I have seen it stated somewhere that the Dutch COVID19 number only counts deaths in hospitals which differs from the UK and given that the Dutch had twice as many cases as Ireland, the excess mortality may be capturing the extra COVID19 deaths.  But still in the UK, France & Belgium, around half of the COVID19 deaths result in excess mortality but in Ireland it’s less than 10%.  I would love to know why this is.

The charts below compare the UK (bars) with the following 4 countries (lines); Germany, Switzerland, Austria & Luxembourg. 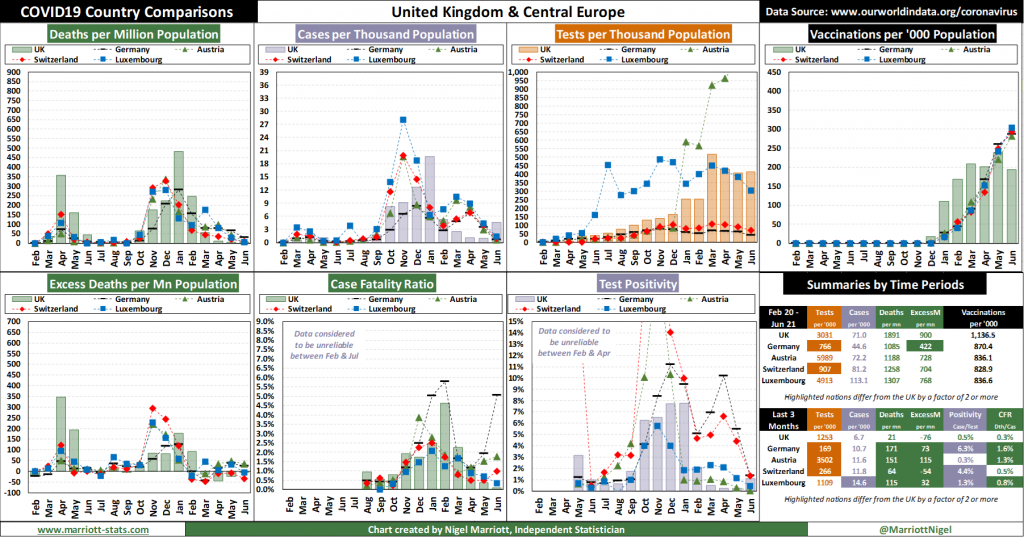 As for Immediate Neighbours, the similarities are more striking than the differences.  Saying that, some differences are worth pointing out.

Up to the recent winter, Germany was the nation standing out with lower figures all round.  However the last 4 months or so has seen higher number of COVID19 deaths which has closed the gap somewhat.

The charts below compare the UK (bars) with the following 4 countries (lines); Denmark, Norway, Sweden & Iceland. I realise that some people would replace Iceland with Finland but for me, Finland is better compared with the 3 Baltic states. 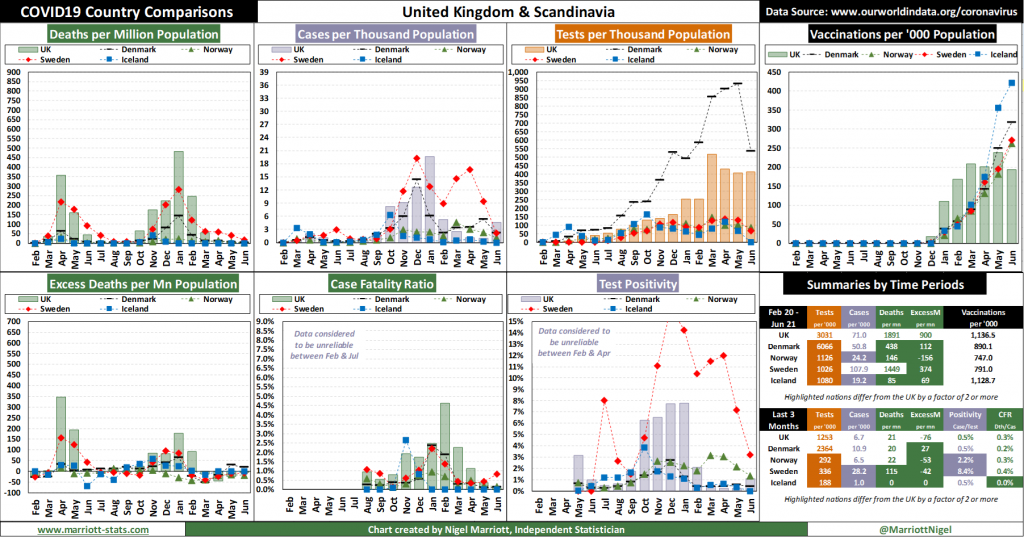 As will be seen, for the most part Norway & Iceland behave differently to Sweden & Denmark.

What makes this an interesting comparison for the UK is that many in the UK would stereotype Scandinavians as being in better health than the UK which might explain the lower deaths rates.  OWID provide a number of health related statistics for each nations and what is surprising to me is that this is not necessarily the case.  The UK has higher rates of smoking but lower rates of Diabetes.

For me the most notable difference between the UK and these 4 nations is the population density of the UK.

The charts below compare the UK (bars) with the following 4 countries (lines); Poland, Czechia, Slovakia & Hungary. They are also known as the Visigrad 4. 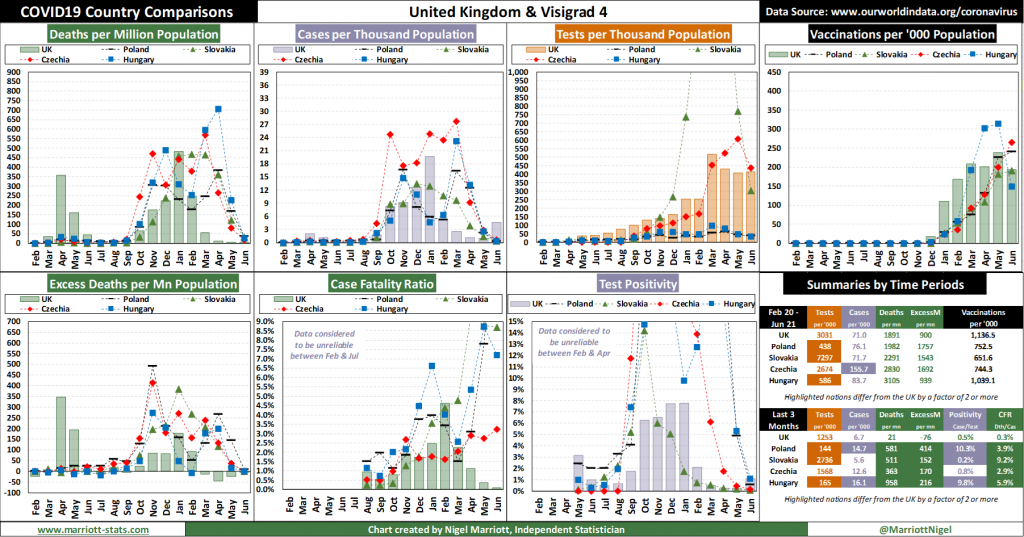 Over the whole pandemic, the UK & the Visigrad4 show similar numbers but the timing has been radically different.

All in all, the Visigrad 4 suggests that nations who largely escaped the 1st wave are likely to have a bad 2nd wave whilst nations with a bad 1st wave have a better 2nd wave.  That would point to the remorseless nature of this disease, you can only dodge for so long and unless you can shut yourself off like New Zealand, until vaccinations can be rolled out, governments will face uneviable choices till then.

The charts below compare the UK (bars) with the following 4 countries (lines); Portugal, Spain, Italy & Malta. Yes I know Portugal is technically not in the Mediterranean but it had to go somewhere! 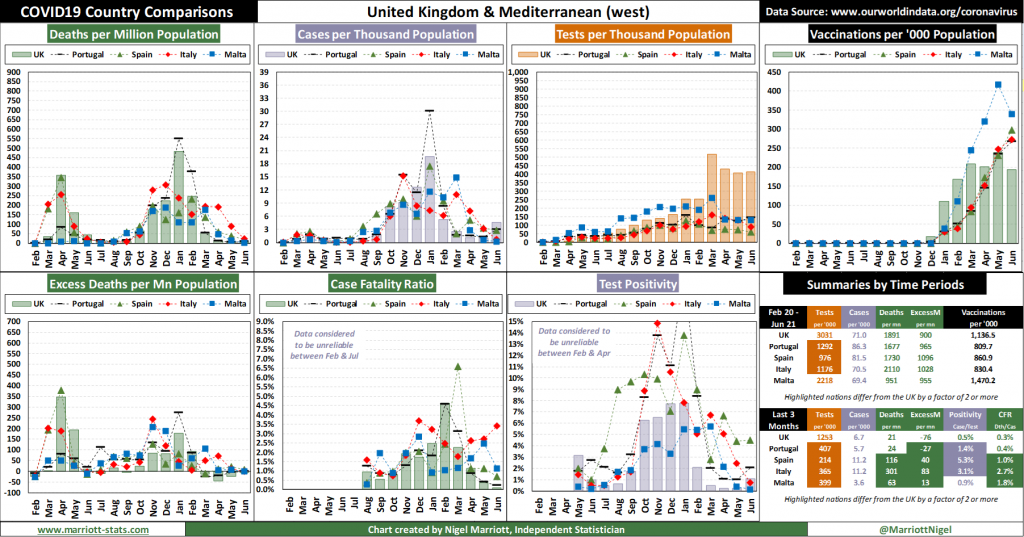 There is a remarkable degree of similarity between these nations in scale and timing.

The charts below compare the UK (bars) with the following 4 countries (lines); USA, Canada, Australia, New Zealand.  Together these 5 countries have what is known as the 5 Eyes pact for sharing intelligence material. 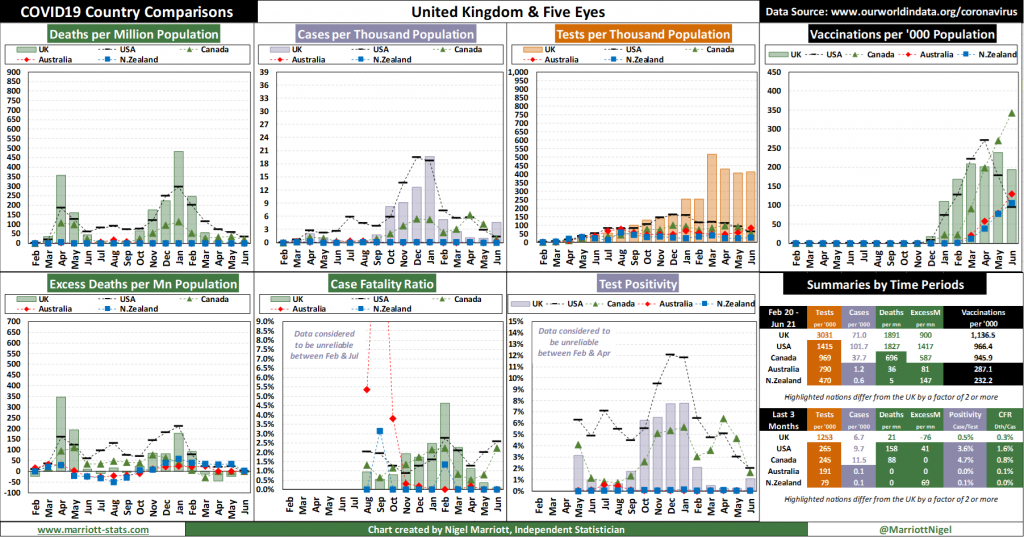 There are clear differences between North America and Oceania.

New Zealand followed by Australia stand out here but whether they are good models for the UK is unclear.  The vast differences in population density and most of all their geographical isolation makes it difficult to decide if they are useful role models.  They are also in the Southern hemisphere as well so their seasons are the other way around.

The charts below compare the UK (bars) with the following 4 countries (lines); Singapore, Taiwan, South Korea and Japan. 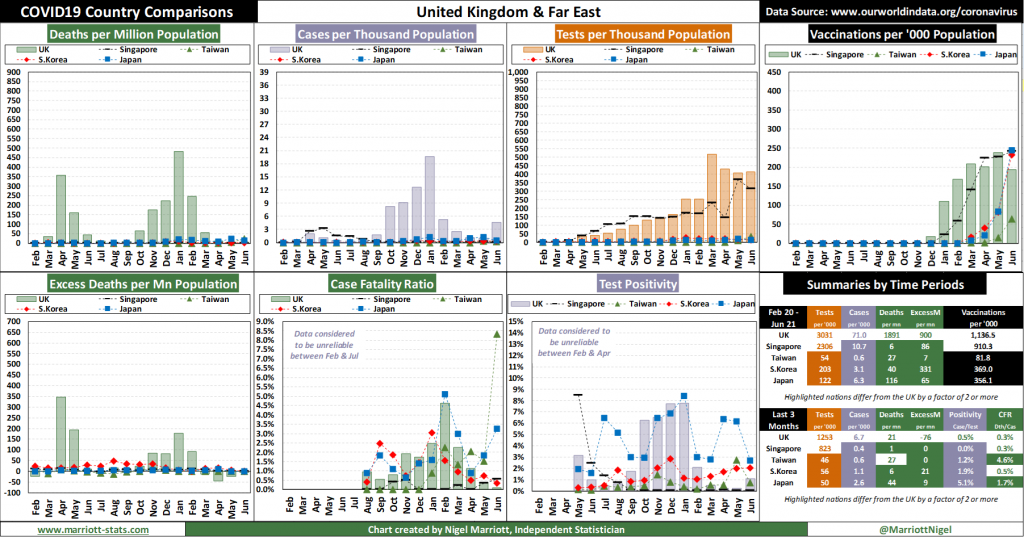 The differences between the UK and these 4 countries is dramatic.

The OWID data set you can download also includes a number of economic, health and demographic indicators for the countries and one reason I chose these 4 countries rather than say Vietnam or China, is that these 4 are very similar to the UK especially in age structure and wealth.  We know that age is a major predictor of death risk and yet the death rate is so much lower here.

Is this because people in these countries are simply less likely to catch COVID19 due to measures taken?  This might be one reason since the CFR s & Positivities are broadly similar to the UK over time.  But I note that testing is so much lower than the UK which surprises me.  Thus it could be that people are dying of COVID19 but without testing it hasn’t been possible to confirm the cause hence why the number of deaths are so low.  Now that excess mortality statistics are available, an interesting picture is emerging in South Korea which has up to date statistics.  It should be noted that Taiwan has not supplied excess mortality data since December, Singapore since March and Japan since April.

So overall, it does appear that the Far East have something to offer the UK but some of the data surprises me.  I am particularly surprised at the low level of testing, Singapore excepted, and I note OWID make a prominent point of making on their website that testing is one of the keys to managing the pandemic.  What I see in the Far East doesn’t conform with that.

The charts below compare the UK (bars) with the following 4 countries (lines); Argentina, Brazil, Ecuador & Peru.. 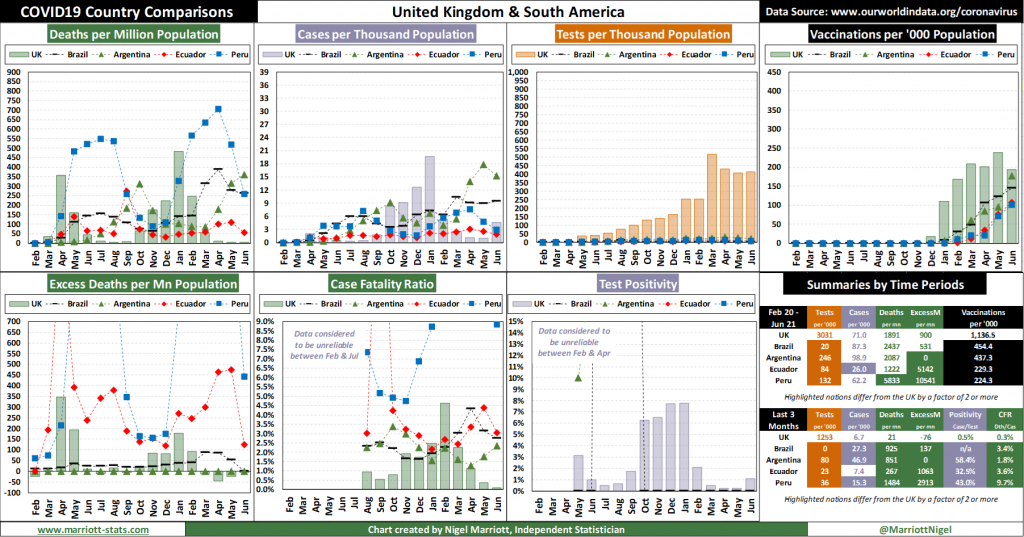 The differences between the UK and these 4 countries is dramatic especially over the last 3 months.  Some of the timing differences will be because these countries are in the Southern hemisphere.

Please use either of these Twitter & LinkedIn threads to leave comments.

If you would like to receive notifications from me of news, articles and offers relating to analysis of trends and making forecasts, please click here to go to my Newsletter Subscription page and tick the Forecasting category and other categories that may be of interest to you.  You will be able to unsubscribe at anytime.

These links have not been updated for nearly a year so they are largely archives with exception number 3 which is still pertinent.

After an entire meteorological year where the temperature above the median for ever single month, … END_OF_DOCUMENT_TOKEN_TO_BE_REPLACED

Sir Donald Bradman is the GOAT (Greatest of All Time) of sporting GOATs.  All cricket lovers accept … END_OF_DOCUMENT_TOKEN_TO_BE_REPLACED