The 2017/18 English Premier League (EPL) kicked off yesterday with Arsenal beating Hull 4-3.  Tomorrow, my team Newcastle United will be playing my wife’s team Tottenham Hotspur so marital harmony could be in short supply!  Be that as it may, what should fans of the Magpies and Spurs be expecting this season?  Newcastle are a recently promoted team whilst Spurs were runners up last season  Is there a way to set realistic expectations for the 2017/18 season?

My answer is to start by identifying what it takes to achieve certain outcomes.  Generally the outcomes of interest in the EPL are:

I have recorded the final league tables for the last 25 seasons of the EPL and in this post I will be focusing on the total number points won in each season.  For the first 3 seasons from 1992/93 to 1994/95, the EPL consisted of 22 teams which resulted in 42 games being played by each team.  I have pro-rated the points in those seasons for a 38 game season instead e.g. Blackburn Rovers who won the title in 1995 with 89 points from 42 games become 81 points from 38 games. 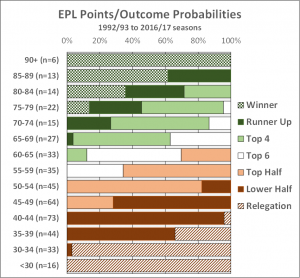 You can download this data by clicking on the link at the bottom of the post.  All data was sourced from Wikipedia.

To set expectations, I start by asking the question “Given a certain number of points what is the most probable outcome?”  The answer is shown in the chart here where I have grouped the number of points into 5 point bands and among the teams that fell into that band over the last 25 seasons I counted the outcomes achieved.  For example, 14 teams have ended up with between 80 & 84 points and of these, 5 have won the title including Leicester City in 2016 with 81 points.  In other words, teams that end up in the low 80s have a 36% chance of winning the title which indicates that Leicester were somewhat lucky to have won the title that year.

If teams end with points in the high 80s then their probability of winning the title rises to over 60%.  Manchester United were the unluckiest team when they finished runners up in 2011/12 to Manchester City with 89 points, losing the title on goal difference.  So far no team getting 90 points or more have failed to win the title but it has happened in the last 3 seasons in Spain which also has a 20 team league.  By the way, don’t feel sorry for Man Utd as they are also the luckiest team winning the title in 1996/97 with the lowest number of points (75).

At the other end of the table, relegation starts to become a threat with point totals in the high 30s.  Crystal Palace hold the dubious distinction of the unluckiest relegated team when they went down in 1992/93 with (pro-rated) 44 points.  In the 38 game season era, West Ham are the unluckiest being relegated in 2002/3 with 42 points.  Those examples aside, the rule that 40 points is needed for safety is generally a good one and indeed teams with 35-39 points still have a 2 in 3 chance of avoiding relegation.

Are these outcome probabilities stable over time or has it become easier or harder to win the league and/or avoid relegation?  To answer this, I calculated for each team something I call the “required” number of points rather than the actual number of points.  Leicester City in 2016/17 is a good example.  They ended up with 81 points but Arsenal in 2nd place only had 71 points.  Therefore, Leicester actually only required 72 points to win the title and they beat this requirement by 9 points.  In the same season, my team Newcastle was relegated with 37 points and their rivals Sunderland (sadly) escaped relegation with 39 points.  Again Sunderland only needed 38 points to be sure of being above Newcastle which is the required number of points to avoid relegation in 2015/16.  In effect, for every team I calculate the required number of points needed to achieve the league placing they did in each season.

Before I go on, I should point out a slight issue with the concept of required points.  Suppose Leicester had ended up on 72 points by losing 3 games that they actually won.  That means those 9 points would have gone to other teams.  If one of those teams had been Arsenal then they would have overtaken Leicester for the title.  This is a point that has to be borne in mind but I don’t think it invalidates the general concept.

The next chart shows what the required number of points was for the 6 outcomes shown in each of the last 25 seasons. 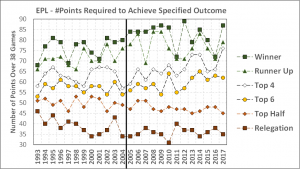 Some outcomes are quite stable over time such as ending in the top half of the table.  Other outcomes can be quite volatile.  What is apparent from this chart is that the gap between winning the title and being relegated has widened over time.  A case can be made that there was a step change in the 2004/05 season which is when Jose Mourinho arrived in the EPL and won the title with Chelsea in his first season with what is still a record number of points (95).  In the same season Rafa Benitez won the Champions League with Liverpool in his first season and this marked an 8 season run where an English club contested the Champions League final in every season bar one.  In effect, the best got better and this led to a distinct jump in the number of points needed to win the league or be runner up. 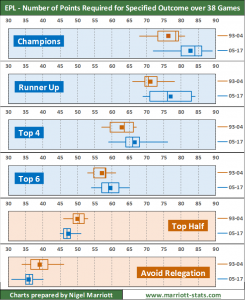 I can show this effect in two ways.  The first chart shown here uses a format which is a variation on something that statisticians a Box Plot.  For each outcome, two “boxes” are shown representing the period 1992/93 to 2003/04 and the period 2004/05 to 2016/17.  Each box contains a square point indicating the average and a line roughly through the middle representing the median.  The box itself represents the Inter-Quartile Range (IQR) with the lower quartile on the left hand side and the upper quartile on the right hand side.  Finally each box has a line sticking out either side to represent the maximum and minimum observed over the indicated time period.  Note this chart uses required number of points rather than actual number of points.

I find this format a very clear way of showing how things changed since 2005.  There is no question that a top 6 place let alone winning the title has become harder.  As a result of the best teams getting more points, this results in teams getting fewer points at the bottom and teams now require 47 points on average to end up in the top half compared to 50 points before Mourinho and 36 points instead of 39 points on average to avoid relegation.  These changes are statistically significant.

A few years ago, Newcastle United upset their fans by publicly announcing that their target was to finish in the top half.  Many fans took that to mean that the club lacked ambition but I always understood this to be a criteria of failure rather than success i.e. finishing below 10th would be unacceptable.  Personally, I have no problem with a minimum criteria but I think it should be based on number of points rather than placings.  After all, no team has any control over what other teams do other than the two occasions a year when they play those teams.  All a team can control is their own performance and I believe targets should be based on what you can control rather than what you can’t control.

Looking at this chart, it is clear that for Newcastle United in 2017/18, their first target will be 40 points to avoid relegation but 50 points is frankly the minimum that I would tolerate which should be enough fo 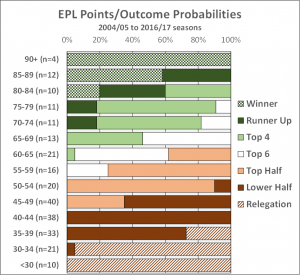 r a top half finish.  Now let’s repeat the first chart I showed in this post but this time just for the 2004/05 to 2016/17 period using actual number of points rather than required points.

We can see that 40+ points is a clear lower half performance and 50 points is a clear top half performance.  Personally, I think for a club of Newcastle’s stature, even these targets are modest enough and if they are achieved this season, I would be looking to change the target to 60+ points next season.  Such a target would have us challenging for a top 6 placing and a probably a place in Europe.

What about my wife’s team Spurs?  They finished as runner up with 86 points last season and the chart shows that they were somewhat unlucky not to win the title.  Personally I would set a target of same again i.e. 80+ points as that guarantees Champions League football and 86 is good enough to win the league in some seasons.  The one point they should bear in mind is that last season was a considerable step up from the previous 7 seasons as shown in this chart where they averaged 68 points varying between 62 & 72 points.  So if they were to get less than 70 points I think s 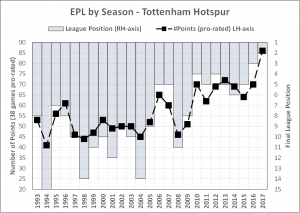 hould be regarded as a failure for Spurs and I would set 70 points to be their minimum target.

I hope you now have the basic idea and have come up with points expectations for your team.  For myself,  I like to translate expectations into expected 6 game performances.  A team wins 3 points for a win and 1 point for a draw so suppose your expectation is 50 points, that works out as just under 8 points every 6 games.  This would be equivalent to 2 wins, 2 draws and 2 losses which is not terribly exciting it has to be!  But with such an expectation in your mind, if after the first 6 games of the season, this is what your team has achieved then you will know that your team is on track to achieve 50+ points.

For a team like Spurs seeking 85+ points to challenge for the title, this works out as 13.4 points every 6 games.  4 wins, 1 draw, 1 defeat gives 13 points so this is really the 6-game standard they need to be achieving at a minimum.

If you would like to look at the data in more depth then please download this spreadsheet which contains the EPL league tables for the last 25 years.

"I mentioned it once but I think I got away with it!" Basil Fawlty didn't get away with it in … END_OF_DOCUMENT_TOKEN_TO_BE_REPLACED

May 2022 was the 5th warmest May on record in the UK.  Whilst temperatures are rising as the days … END_OF_DOCUMENT_TOKEN_TO_BE_REPLACED

Whilst COVID19 was ravaging the world in 2020 & 2021, I felt there was little point in updating … END_OF_DOCUMENT_TOKEN_TO_BE_REPLACED