In many countries across the world, the total effect of the Coronavirus pandemic is now being measured using the concept of Excess Deaths.  However, publication of such data by the Office of National Statistics for England is up to 2 weeks slower than the daily deaths published by Public Health England.  In this post, I update my model which uses the PHE series to estimate what the ONS will publish for excess deaths in England on Tuesday 30th June.

My estimates of excess deaths for the weeks ending 19th & 26th June are shown below along with extrapolations (not estimates) for ONSr which I explain in a separate post (see sections 1 & 4).  Two estimates for ONSx are given, EstPHE based on PHEr data and EstCQC based on CQCn data. Both are described in this post and in posts 6 to 9 above.  Please note in links 1 to 4 above, an older model was used which is now retired and is not explained here. 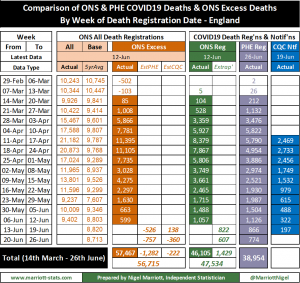 There were 599 excess deaths in England in the week ending 12th June, 800 higher than my estimate.  I have said before I would prefer to be overestimating than underestimating and the error is within the 95% confidence interval but I am regarding this as a serious underestimate. 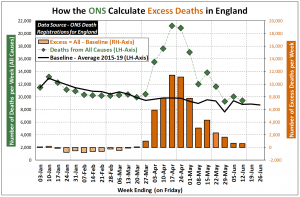 We now have 12 weeks of data with significant excess deaths plus of couple weeks beforehand when the first COVID19 deaths were recorded.  That is enough to start building a model using weekly data only.  In this model the output variable I am aiming to predict is ONSx but ONSm.  ONSx is defined as

I call ONSm the Mortality Ratio.  The advantage of this is it makes is easier to predicted negative excess deaths which occurs when ONSm is less than 1.  It also allows for log transformations of the output variable which couldn’t be done with ONSx but can be done with ONSm and is equal to log(ONSa) minus log(ONSb).

I have plotted ONSm against both PHEr and CQCn on the same scatter plot here since PHEr and CQCn are similar in scale.  ONS week numbers are used 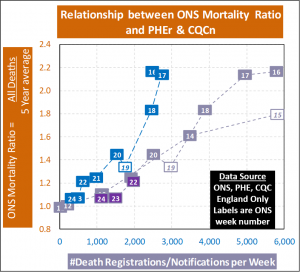 as labels and the most recent week ending 12th June is week 24.  We are trying to predict ONSm for week 25 where we already know what PHEr (866) & CQCn (197) are from the table at the beginning.  The labels with white backgrounds (weeks 15 & 19) had Friday bank holidays (Good Friday & VE Day respectively).  The reason I highlight this is because PHEr and ONSm are based on death registrations and bank holidays result in reduced staffing levels for compiling the data and thus artificially lower death counts.  In contrast, I believe the effect of Monday bank holidays is more limited since staff have the rest of the week to catch up.

**IMPORTANT – PHE made a change in the way they record deaths in the week ending 29th May (week 22) as described in this link.  For the purposes of using the model shown in the chart here, I included an extra dummy variable since week 22 in my model hence why this week is highlighted in purple in the chart.  My forecast for weeks 25 & 26 take this effect into account

CQCn data is only available from week 16 (week ending 17th April) and so cannot be incorporated directly into the model above.  If I build a separate model for the blue labels on the scatter plot, I get an estimate for ONSm of 1.02 which converts to an estimate for ONSx of +138.  Clearly a CQCn based forecast is very different from a PHEr based forecast and is based on 9 weeks data as opposed to 14 weeks for PHEr.  Despite, I now think I have enough data to start including CQCn based forecasts in my table at the beginning and these are shown in the ESTCQC column. 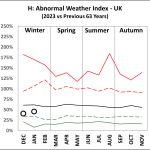 Did you know it was the 3rd sunniest January on record in the UK?  Neither did I but it was the only … END_OF_DOCUMENT_TOKEN_TO_BE_REPLACED

After an entire meteorological year where the temperature above the median for ever single month, … END_OF_DOCUMENT_TOKEN_TO_BE_REPLACED

Sir Donald Bradman is the GOAT (Greatest of All Time) of sporting GOATs.  All cricket lovers accept … END_OF_DOCUMENT_TOKEN_TO_BE_REPLACED