You are here: Home / Elections / EU Referendum #4 – Find your way out of the Brexit maze in 43 Days!

Rather than celebrating love on Valentine’s day, Parliament chose to use the occasion to emphasise their discord over the EU withdrawal process, 43 days before the UK is due to leave the EU.  Three amendments were voted on and this allows me to update my Brexit voting blocks which I first described in “Find your way out of the Brexit maze in 57 days!”.

This post was updated on 22nd February 2019 to take into account the resignations of 9 MPs from the Labour party. and 3 MPs from the Conservative party.

The voting records of each MP in the House of Commons is recorded by Hansard and they have an extremely useful facility that allows you to download the voting data into a spreadsheet.  I have used this to download the data for the Meaningful Vote on 15th January, the 7 Amendments considered on 29th January 2019 and the 3 Amendments on 14th February 2019.  I collated all these votes for the 637 MPs who will be able to determine the outcome over the next 2 months and you can download a spreadsheet with this data and my analysis using this link – MPs votes on Brexit v2.3

In this post, I will start by focusing on four votes, which are the Meaningful Vote on 15th January and the 3 Valentine Amendments (Labour 2, SNP and Government).  What I wanted to see was whether specific voting patterns were apparent and in the end, 7 patterns or voting blocks emerged.  These are listed and summarised in the graphic below. 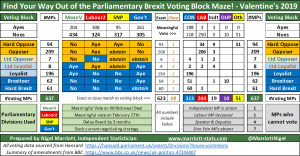 Out of the 637 voting MPs (13 are unable to vote as explained in the graphic), 625 can be matched exactly to one of the 7 voting blocks shown.  I have largely stuck with the labelling I used to create the 5 voting blocks in January but added two extremes, Hard Brexit and Hard Oppose.

The other 12 MPs did not follow any of these 7 blocks exactly but I decided they could be categorised as being close matches to one of the blocks.  In my spreadsheet, you can edit the voting blocks if you wish to see how things might change.

The next graphic looks at whether there has been any substantial movement since January by comparing the 5 blocks then with the 7 blocks today.  My take on the Valentine amendments is twofold.  First, nothing has really changed.  There is a putative majority for a deal provided the concerns of the Brexiteers can be met.  Second, Labour and the Conservatives are breaking into clear factions.  The question is whether these factions will remain bound by their nominal party labels or whether a genuine split in these parties will occur.

For completeness, here is the January voting block breakdown now with the 9 Labour & 3 Tory MPs becoming Independents.  This differs from what I published previously.

The 5th warmest July on record included a new record temperature of 40.3C on 19th July.  It was also … END_OF_DOCUMENT_TOKEN_TO_BE_REPLACED

We've now had 3 months of extremely boring weather in the UK!  It's not doing the UK's reputation … END_OF_DOCUMENT_TOKEN_TO_BE_REPLACED

"I mentioned it once but I think I got away with it!" Basil Fawlty didn't get away with it in … END_OF_DOCUMENT_TOKEN_TO_BE_REPLACED

May 2022 was the 5th warmest May on record in the UK.  Whilst temperatures are rising as the days … END_OF_DOCUMENT_TOKEN_TO_BE_REPLACED