This isn’t a fanciful scenario, it is a fact today that the ONS’ measures of the gender & ethnicity pay gap are in no way comparable with the pay gaps reported by employers.  It is also fact today that the ONS gender pay gap is more negative for women and the ONS ethnicity pay gap is more favourable for ethnic minorities compared to data reported by employers.  The best way to demonstrate these two facts is to imagine that every single employer has no gender pay gap and no ethnicity pay gap and ask what the national pay gaps as measured by the ONS would be in this scenario.

Why ONS Gender Pay Gap is more negative for women

Take a look at this graphic with 6 fictional employers, each with 12 employees.  In each employer, the median woman earns the same as the median man and the average woman earns the same as the average man (slight difference for Office Cleaning & Co).  3 employers have male dominated workforces and 3 employers have female dominated workforces and there are 36 men & 36 women in total.  Assume these 6 employers represent the entire economy that the ONS reports on, how much do the median man and the median woman earn? 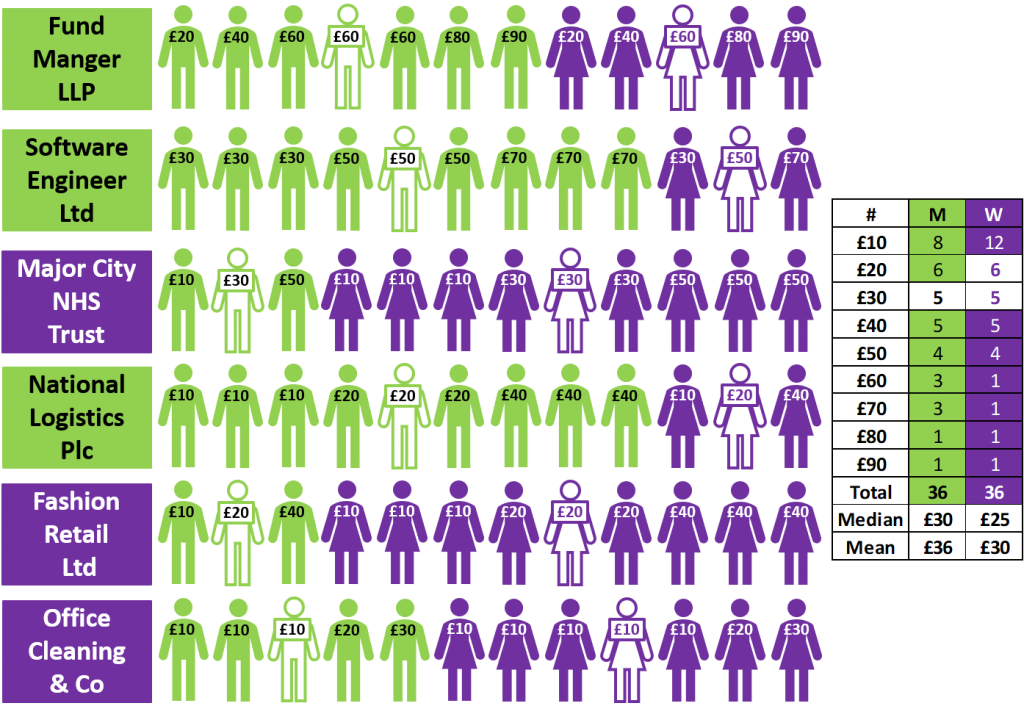 The bottom line is that any employer that seeks to compare their pay gap with the ONS pay gap is making a false comparison.  ONS pay gaps can never be comparable with pay gaps from GPG reporting and such efforts should be discontinued.  Should we ever get to a situation where no employer has a gender pay gap, I would still be expecting the ONS to be reporting a pay gap against women of around 5-10p in the pound.

In 2019, ONS reported the median ethnic minority employee earns 97.7p for every £1 earned by the median white British employee.  I have seen some scepticism of this figure which appears to be a narrower pay gap than those reported by a number of employers.  Again it turns out there an obvious reason why the ONS will always report a more favourable pay gap for ethnic minorities and once again, no employer should ever be comparing their ethnicity pay gap with the ONS figure.

Unlike gender, ethnicity is not uniform across the UK.  Some areas are very white, other areas are ethnically very diverse.  However, none of this would matter if the average pay was the same across the UK.  As we all know though, pay in London is much higher with the ONS currently estimating the London premium to be at least 30%.  At the same time, London is much more diverse than the rest of the UK.  Consequently it is more likely that a non-white employee will be living in London and earning a premium compared to a white employee who is more likely to be living outside of London and not earning a premium.  Thus it is not surprising that the national ethnicity pay gap should be so small.

To demonstrate this, I will again assume that no employer in the UK has an ethnicity pay gap.  Rather than creating fictional employers, this time I have imagined each of the 632 parliamentary constituencies in Great Britain are employers (with approximately 100k employees including children!) and within each constituency, the median white employee earns the same as the median non-white employee.  From the 2011 census, we know what % of the population in each constituency is white British and the ONS also report the median full time weekly wage by constituency.  Whilst later data is available, my point still stands using the latest data I have in my possession which is for 2017. 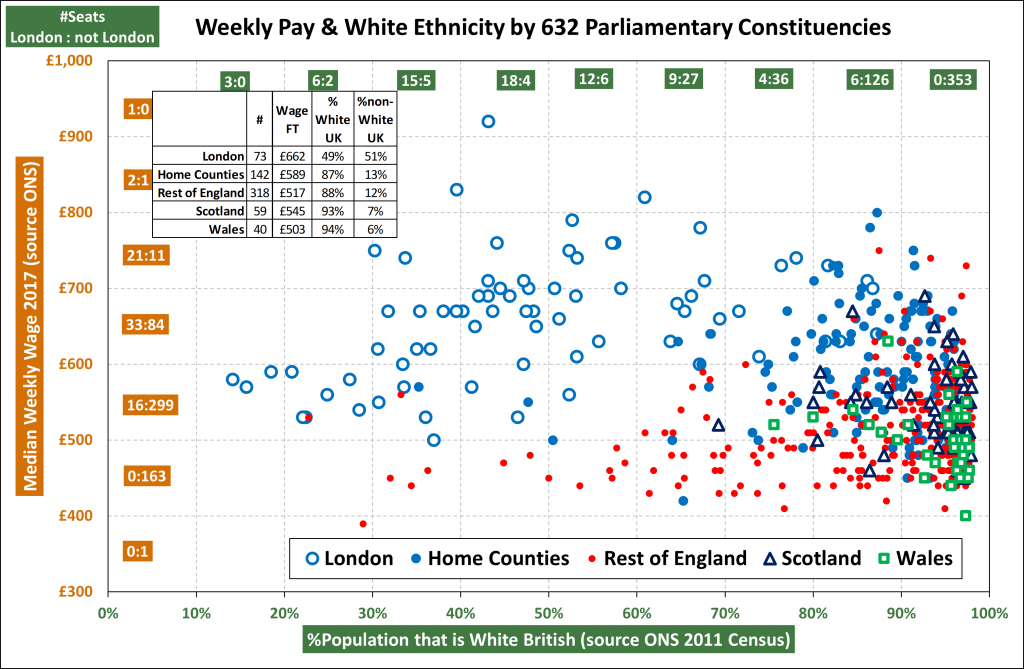 If we make the assumption that within each seat, there is no ethnicity pay gap, then one can take a weighted average of the weekly wages using the %white british as the weight to estimate that the average weekly wage for White British would be £545 and for non-white British, it would be £585.  Thus for every £1 earned by a white British employee, a non-white British employee would be earning £1.073.  Given that the ONS currently estimate this to be 97.7p instead, that implies that within each seat on average, the median non-white person is earning 90.4p for every £1 earned by a white person.

Which pay gaps are more meaningful – ONS or Employer’s?

Over my 30 years as a statistician I have lost count of how many times I have said “Objectives! Objectives! Objectives!“.  The question posed here is incomplete, what you need to ask instead is “what am I trying to do?” and “which measure is more meaningful given my objective”.

For an employer, the ONS figure is irrelevant.  Indeed I argue far too much time is spent comparing one employer with another when employers should be comparing themselves over time to see if they are improving.  I’ve said before that pay gap analytics is all about Continuous Improvement and is not about your place in a league table.  Employer reported data is the best data to use if one is interested in trends over time as it allows a lot of true like for like comparisons as I did recently when estimating the trend for 2020.

On the other hand, if I want to see if the earning power of women or a specific ethnicity is improving, then the ONS figure is more meaningful.  The fact that ethnic minorities are more likely to be in London does indeed boost their earning power and the ONS figure reflects that.  Of course, it should be noted that ONS pay calculations exclude overtime, most bonuses, pensions and non-monetary rewards so they should be included if we truly want to know what the earning power of a group is.  Indeed I would also argue that hourly pay which puts full time & part time employees on the same basis is misleading and the fact that women are more likely to work part time reduces their total earnings.  So for me, earning power should in fact be total annual remuneration regardless of hours.

UK Inflation has risen sharply since the start of 2022 and dominates the media and politics today.  … END_OF_DOCUMENT_TOKEN_TO_BE_REPLACED

Rishi Sunak is the UK's first Prime Minister from a non-white ethnic minority. Did this happen by … END_OF_DOCUMENT_TOKEN_TO_BE_REPLACED

The weather in the UK for October was warmer and sunnier than normal.  Overall we are heading for … END_OF_DOCUMENT_TOKEN_TO_BE_REPLACED

The weather in the UK for September was unremarkable.  Perhaps that is a welcome change after the … END_OF_DOCUMENT_TOKEN_TO_BE_REPLACED

The 2022/23 Women's Super League (WSL) kicks off this weekend in England.  After the Lionesses … END_OF_DOCUMENT_TOKEN_TO_BE_REPLACED