England will take on South Africa in the 2019 Rugby World Cup final this weekend and I am predicting a win for England by 1 to 6 points.  In other words, it will be close and exciting! 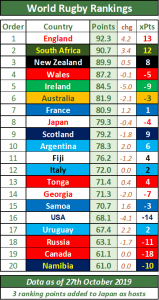 points have been added to their ranking points. It should be noted that Namibia are in fact in 23rd place in the full rankings but 3 teams ahead of them (Spain, Romania & Portugal) failed to qualify.

The table also shows the change in ranking points over the whole World Cup for each team and the extent to which each team has outperformed their expected performance using my EXPWIN model which has been the basis of my forecasting.  You can find out more about EXPWIN (& HIGHRANK) by reading my first post and learn more about the outperformance concept by reading another post I wrote at the start of the knockout stage.

Ahead of making my forecast for the final, I looked in detail at how well my two models EXPWIN & HIGHRANK performed and you can read my conclusions here.

Here is how the quarter-finals and semi-finals worked out along with my prediction for the final. 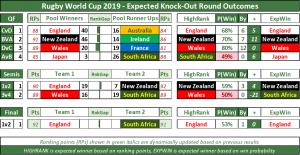 England are 1.6 ranking points ahead of South Africa which makes for a very close match.  EXPWIN predicts England to win by 1 point with only a 53% chance of winning.  Both England & South Africa have outperformed EXPWIN to the same extent so the expected margin of victory doesn’t change.  In other words it’s a toss up.

The good news for England fans is my model evaluation showed that the stronger teams have been underestimated by between 0 & 10 points with an average of 5 points.  On that basis, my prediction is then revised to an England win by 6 points and a 2/3 chance of winning.  Looking at odds offered by bookies as of today,  I am seeing the most common odds are 9/4 on for England and 7/4 for South Africa which is basically the same as my revised odds.

What does History say?

Using history as a baseline for a forecast is a perfectly valid method.  You can see an example of this in my post about the odds of President Trump being reelected in 2020.  When it comes to one-off matches like a World Cup Final, it’s probably less useful but it can serve as a good sense check of any forecast especially if one side is apparently overwhelming favourites.

Here is what history has to say about Rugby World Cup finals.  I start by listing the finals in chronological order.

The omens I see from this are:

Make of all that what you will.

But the biggest and most pertinent historical fact is that all 8 winners so far went through the tournament unbeaten.  In 5 finals (’87, ’95, ’99, ’03, ’15) both finalists were unbeaten up to that point so that outcome was guaranteed but in 3 finals (’91, ’07, ’11), one finalist had lost a pool game and went onto lose the final though not by much it must be said.

UK Inflation has risen sharply since the start of 2022 and dominates the media and politics today.  … END_OF_DOCUMENT_TOKEN_TO_BE_REPLACED

Rishi Sunak is the UK's first Prime Minister from a non-white ethnic minority. Did this happen by … END_OF_DOCUMENT_TOKEN_TO_BE_REPLACED

The weather in the UK for October was warmer and sunnier than normal.  Overall we are heading for … END_OF_DOCUMENT_TOKEN_TO_BE_REPLACED

The weather in the UK for September was unremarkable.  Perhaps that is a welcome change after the … END_OF_DOCUMENT_TOKEN_TO_BE_REPLACED

The 2022/23 Women's Super League (WSL) kicks off this weekend in England.  After the Lionesses … END_OF_DOCUMENT_TOKEN_TO_BE_REPLACED