My team Newcastle United are also known as the Magpies but how much of a GOAT are they?  In recent years, this acronym has become popular as a shorthand for Greatest Of All Time.  Given that the Magpies have not won a trophy in the 40+ years that I have supported them, I know they are not the number 1 GOAT in English football but where would they sit in a GOAT table?

Ranking tables are extremely common in sport and sport analytics as they are easily understood by fans.  If I want to compile a ranking of all English football clubs, there are two decisions I have to make:

In this post I will use 3 eras and 3 metrics to creating 9 GOAT tables in all.  Read on to find out which club is #1 GOAT!

The Points metric is clearly more subjective than Trophies and Summits.  You can see that I have made 1 summit worth more than 2 league cups and I am sure if you were to ask Leicester City fans, they would agree with this given their league title in 2016 compared to their League Cups of 1997 & 2000.  More controversially, I have equated being a runner up in the League or Champions League to be equal to winning the League Cup.  Part of my reason for this is that in the EPL era, the big clubs have devalued the tournament by playing weaker teams in the League Cup.  Having said all that, I think my points system is quite robust and the GOAT tables I create are not that sensitive to choice of point values. 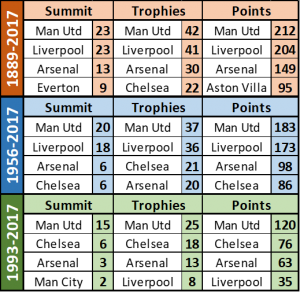 Overall, I look at this table and conclude that the aristocracy of English football consists of Man Utd, Liverpool, Arsenal and Chelsea.  Interestingly, these are the only 4 English teams to have won European trophies in the modern era which I think confirms the essential soundness of my GOAT methodology.

Let’s come back to my team Newcastle Utd and see where they sit on the GOAT table.  I will star 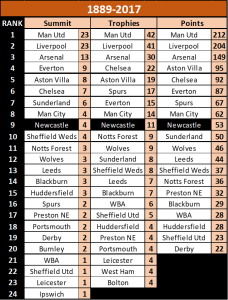 t with the first era of 1889-2017 and in general I will show the top 20 teams for any era.   The table here shows they are 9th best English team of all time on all 3 metrics.  In that timeframe, 24 teams have reached the summit, a further 22 teams have won a trophy and another 12 teams have been runner ups.  You can also see that Sunderland fans will take the opportunity to remind Newcastle fans that their team has reached the summit more times whilst Newcastle fans will counter with more trophies.  One team that does stand out to me is Spurs who have only won two League titles (joint 15th GOAT) but have won many cup competitions (6th GOAT).

Moving onto the Eu 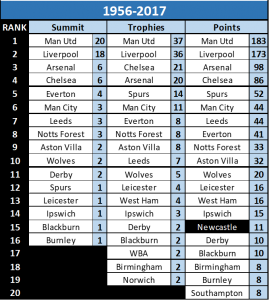 ropean era of 1956-2017, Newcastle drop out of the GOAT tables on summits and trophies having only won one trophy in that time (1969 UEFA cup).  In this era, 19 teams have won at least 2 trophies and many Newcastle fans still bemoan the lack of at least a second trophy given they were runners up 6 times in this era.  This explains why Newcastle are 15th GOAT on points.

Another noticeable point about this era is that both Man Utd and Liverpool are essentially neck and neck, just as they were over all time (1889-2017).  It is only when we get into the modern era (1993-2017) that Liverpool fall away and are replaced by Chelsea as

2nd GOAT.  In this era, 15 teams have won a trophy and only 9 have won two.  In particular Leicester stand out as 6th GOAT due to their title in 2016.

For the points metric, exactly 20 teams have 2 or more points so they could be considered the modern era GOAT Premier League.  Of these 20, 5 have not won a trophy and are shown as starred italics.  Frustratingly for me, Newcastle are one of them and are in fact 11th GOAT ahead of 5 teams who have won trophies in the modern era.  It is this point that sums up the essential frustration of Newcastle fans today.  The club does have the pedigree to win trophies and history shows that they have been close enough to do so which makes the lack of ambition shown by the current owner and board galling.  I predict more “Ashley out!” protests this season!

If you would like to create your own GOAT table then download my spreadsheet below.  The list of winners and runner ups are shown on the RECORDS tab and the GOAT tab allows you to build your own GOAT table.  In cell B2, you can enter the year you want your GOAT table to start from and in row 1, the yellow cells show the points value I have assigned to each trophy which you can edit as you wish.  Once you have made your selections, you can then sort on whichever column you wish.

UK Inflation has risen sharply since the start of 2022 and dominates the media and politics today.  … END_OF_DOCUMENT_TOKEN_TO_BE_REPLACED

Rishi Sunak is the UK's first Prime Minister from a non-white ethnic minority. Did this happen by … END_OF_DOCUMENT_TOKEN_TO_BE_REPLACED

The weather in the UK for October was warmer and sunnier than normal.  Overall we are heading for … END_OF_DOCUMENT_TOKEN_TO_BE_REPLACED

The weather in the UK for September was unremarkable.  Perhaps that is a welcome change after the … END_OF_DOCUMENT_TOKEN_TO_BE_REPLACED

The 2022/23 Women's Super League (WSL) kicks off this weekend in England.  After the Lionesses … END_OF_DOCUMENT_TOKEN_TO_BE_REPLACED