On the eve of Article 50 notification and with speculation about an early election being called, my latest opinion poll tracker predicts the Conservatives would have a working majority of 143 seats if an election was held today.  Since the Stoke Central by-election last month, it appears that some UKIP voters are switching to the Conservatives, the Lib Dem recovery is taking a breather and the 5 year decline in Labour’s fortunes shows no sign of coming to an end. 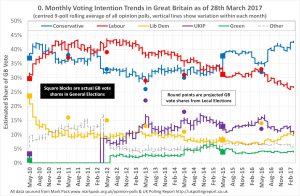 All data sourced from Mark Pack and UK Polling Report.

Compared to my tracker post of last month (which explains the details of my 6 charts), UKIP are down 1.5 points with most of that going to the Conservatives.  Chart 4 below shows that whilst UKIP have been gaining some Labour voters, these gains are now being cancelled out by losses to the Conservatives.  This decline started after the Stoke Central by-election and it is hard to avoid the conclusion that UKIP’s poor showing in Stoke has disillusioned some of their voters. 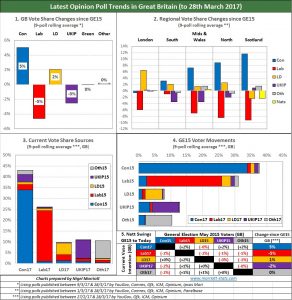 The Lib Dems recovery since the referendum last year appears to have plateaued for now.  Chart 2 shows that their strongest gains have been at the expense of Labour in London but they are making progress across the rest of England and Wales.

The most striking feature of chart 2 for me is how Labour’s losses are relatively modest in the South but are averaging 7% elsewhere in Britain.  The South is Labour’s weakest area in any case with only 19.2% of voters voting Labour in the 2015 General Election and currently they are on 18%.  Interestingly, Labour’s vote share in Scotland based on chart 2 is on 15% and of course Scotland is where Labour’s core vote fractured in 2015.  If we split the difference and say that 17% represents the ultimate floor for Labour, then they still have much more to lose in London (currently 37% share), the North (currently 35% share) and the Midlands/Wales (currently 26% share).  Since January 2013, Labour has been losing votes at the rate of 3.3% per year and with another 3 years to the 2020 general election (assuming one is not called before then), 17% is exactly where Labour will end up if the current trend continues. 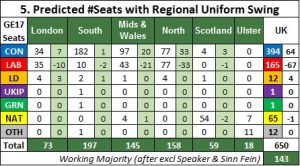 ctions in chart 5 assume uniform swing within each region using the figures shown in chart 2.  For the Conservatives, these figures must surely be tempting them to call an early election (notwithstanding the fixed term parliament act).  Their biggest gains would come in the North West where they recently won the Copeland by-election & Yorkshire.  Indeed Labour would be wiped out in Cumbria and North Wales.  In Scotland, the Conservatives are gaining a lot of votes but as yet this does not translate into many seats since the SNP still appears to be strong.  The most promising areas in Scotland for the Conservatives are to be found in the Borders and the Grampian areas.

For the Lib Dems, chart 5 shows that they have to fight the battle of the first past the post election system all over again.  For now, their recent improvement in the polls will win them seats in London but not elsewhere.  I have stated elsewhere that an electoral pact with the Green party has to be considered and in a future post, I will take a look at what the rewards of such a pact might be.

After an entire meteorological year where the temperature above the median for ever single month, … END_OF_DOCUMENT_TOKEN_TO_BE_REPLACED

Sir Donald Bradman is the GOAT (Greatest of All Time) of sporting GOATs.  All cricket lovers accept … END_OF_DOCUMENT_TOKEN_TO_BE_REPLACED