The Prime Minister has called for a General Election on 8th June 2017 and parliament has approved this.  For the next 6 weeks, opinion polls will be coming in thick and fast and I will do my part by keeping my opinion poll tracker up to date and explaining what the latest trends are.  I will use these trends to update my 2017 General Election Seat Predictions and you should read that post in conjunction with this one.

The latest situation is that the Conservatives hold an 18% lead over Labour and are on track for a working majority of 171 seats.  Labour are set for their worst general election vote share since 1918 and the Lib Dems have overtaken UKIP to regain 3rd place in the polls for the first time since December 2013.

Chart G1 shows the Conservatives have extended their lead over Labour since the election was called by nearly 4%.  It appears that the UKIP and Green vote has fallen away whilst the Lib Dem vote has increased taking them into 3rd place.  Labour started the election at a low point of 25% but have recovered to 28% over the last week.

If this is the final outcome, it will be the largest Conservative vote since 1959, beating anything that Margaret Thatcher & Ted Heath achieved as shown in chart G3.  For Labour, this would be their worst vote share since 1918 when they recorded 23%. 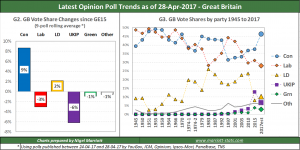 Nearly all pollsters ask their respondents how they voted in the EU Referendum last year.  This allows us to break down the Leave & Remain voters by vote intention.  Unfortunately the polls don’t break this down for each nation, so I have excluded the Nationalist vote from chart B1 & B2 to show the break down for English voters only.  We see that Conservatives make up 62% of Leavers and 33% of Remainers.  In March, these figures were 56% & 35% respectively so it appears that the increased Conservative vote since the election was called has come from Leavers.  It is also worth noting that in March 17% of Remainers were Lib Dems but this is now up to 19%. 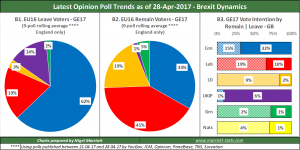 Chart B3 shows the breakdown of each party today into its Remain & Leave voters but note that the numbers on the chart represent the % of all GB voters that fall into that combination of party & referendum vote.  So the largest group of voters today are Conservative Leavers accounting for 32% of all voters in Britain.  This is followed by Labour Remainers (18%) and Conservative Remainers (15%).  What I find interesting is that around 30% of Labour, Green and Nationalist voters say they voted Leave which suggests that any Anti-Brexit attack to make inroads into the Conservative Remain bloc runs the risk of losing voters within their own Leave bloc.  The proportion is lower for the Lib Dems.

The polls split current vote intentions by how people voted in 2015 which is what is shown in chart S2.  Continuing the theme of the Lib Dem/Conservative battle over Brexit, this shows that since 2015, 1.5% of CON15 voters have switched to the Lib Dems and presumably most of these were former Conservative Remainers.  At the same time, 1.5% of LD15 voters have switched to the Conservatives and presumably these were Lib Dem Leavers.  So the nett swing or switching between Conservatives and Lib Dems is 0% (=1.5%-1.5%) which is what is shown in table S3.  The same process can be repeated for all party combinations and what is immediately clear is that Labour has lost votes to all parties.  The largest change by far has been the switching of UKIP15 voters to the Conservatives. 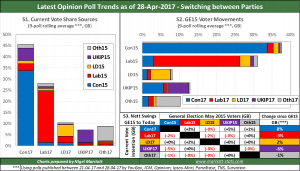 Chart S1 is the same data as S2 but the blocks have been rearranged into current voting intentions.  This clearly shows that the increased Conservative vote share is mostly coming from former UKIP voters especially in the last week or so.  At the same time, the Conservatives are also gaining some ex-Labour voters with 2% of LAB15 voters switching to the Tories with very few going the other way.  I would surmise that the Labour to Conservative switchers are the voters that UKIP set out to capture but since UKIP’s failure to win the Stoke Central by-election, they have now plumped for Theresa May’s party.

All pollsters break down their results by region but they don’t use the same regional definitions.  In some cases, their regional breakdowns result in very small samples that would be too small to draw conclusions on.  However, by averaging across multiple polls and using some simple statistical modelling, it is possible to arrive at more robust estimates of how the parties votes have changed within each region.  Every now and again, a poll for a specific region is published and that allows me to crosscheck my estimates.  At the same time, I include the regional-specific polls (2 Scottish polls were published yesterday and a London poll was published last month) in regional averages but I give them more weight than the regional breakdowns from national polls. 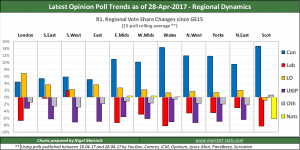 For me, chart R1 is the most interesting chart in this post.   It shows that the Lib Dems recovery is strongest in London, middling in the South East & East but weak elsewhere.  My belief is that the Lib Dems are doing best in major cities and university towns and that their vote is inversely correlated with distance from London.  These areas had the strongest Remain vote and clearly the Lib Dems are appealing to the Anti-Brexit vote.  Their issue is that these places are also the strongest areas for the Green party and as I have stated before, the Lib Dems and the Greens need to discuss an electoral pact to maximise their chances.  Saying, it is noticeable that Others are down across the board and chart G1 above shows that the Green has fallen by about a point or so.  I surmise that some Green voters are defecting to the Lib Dems perhaps for tactical reasons.

For Labour, chart 2 shows that their vote is stable in the South but this is their weakest area.  Elsewhere they are losing votes to the Lib Dems in London and the Conservatives in Wales, Midlands, North & Scotland.  This imbalance in their regional performance must be a particular concern for Labour as they face the prospect of losing votes to the Conservatives in their heartlands.

For the Conservatives, this chart is pretty much perfect for them.  They are making reasonable gains in their heartlands and making significant gains where they need to.  The most spectacular gains have come in Wales (+14%) and Scotland (+15%).  In Wales, this will make them the largest party, the first time since 1918 that Labour have not topped a Welsh general election poll.  In Scotland, their vote share will be their highest since 1983.

UK Inflation has risen sharply since the start of 2022 and dominates the media and politics today.  … END_OF_DOCUMENT_TOKEN_TO_BE_REPLACED

Rishi Sunak is the UK's first Prime Minister from a non-white ethnic minority. Did this happen by … END_OF_DOCUMENT_TOKEN_TO_BE_REPLACED

The weather in the UK for October was warmer and sunnier than normal.  Overall we are heading for … END_OF_DOCUMENT_TOKEN_TO_BE_REPLACED

The weather in the UK for September was unremarkable.  Perhaps that is a welcome change after the … END_OF_DOCUMENT_TOKEN_TO_BE_REPLACED

The 2022/23 Women's Super League (WSL) kicks off this weekend in England.  After the Lionesses … END_OF_DOCUMENT_TOKEN_TO_BE_REPLACED