There are only 9 days of campaigning left before the voters go to the polls on 8th June.  Between now and then, we can expect around 8 to 10 polls per week to be published and I will keep you up to date with what they are saying.  I will use my analysis of these polls to update my 2017 General Election Seat Predictions and you should read that post in conjunction with this one.

The latest situation is that the Conservatives now only hold a 9% lead over Labour which is down 4% from last week.  Labour’s vote share has recovered significantly to narrow the Conservatives lead and Labour are now polling above the level that they were just before the 2015 general election.  The Lib Dems are back to where they were in 2015 whilst the Greens & UKIP continue to fade away.

Chart G1 shows the Conservatives are holding onto an 9% lead over Labour which down from 13% in my last update.  The Conservative vote is down 1.5% in that time frame but their vote share is still a very healthy 44%.  The question is whether they can hold onto this or whether there will be further declines.  Labour have made quite a recovery reaching 35% after being at a low of 25% when the election was called.  It worth recalling though that 33% is what Labour was polling in the 2015 general election but the polls were in error and they ended on 31.2%.  All charts shown in this post assume that the polls are accurate and no adjustment for probable polling error has been made. 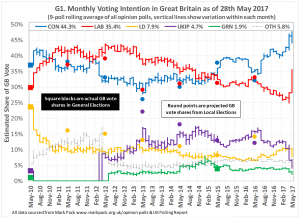 If this is the final outcome, the Conservative will be comparable to Margaret Thatcher achievements in the 80’s as shown in chart G3 so I don’t think the Conservatives will be unhappy.  For Labour, this would avoid recording their worst vote share since 1918 but it would still be a performance similar to 1987 & 1992.  The Lib Dems would not advance on their 2015 performance which is when they returned to their pre-1974 levels. 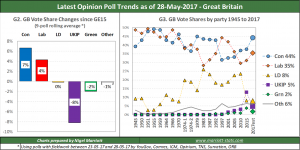 In effect the story of 2017 now is a straight 7% swing from UKIP to the Conservatives and a smaller 2% swing from the Greens to Labour plus additional smaller swings from UKIP & Others to Labour.  Both swings may involve tactical voting by Green and UKIP voters but the effect would be the highest 2-party (CON+LAB) share of the vote since 1979.  The final element in the story has been the total failure of the Lib Dems to make any recovery especially given their determination to resist Brexit.

Nearly all pollsters ask their respondents how they voted in the EU Referendum last year.  This allows us to break down the Leave & Remain voters by vote intention.  Unfortunately the polls don’t break this down for each nation, so I have excluded the Nationalist vote from chart B1 & B2 to show the break down for English voters only. 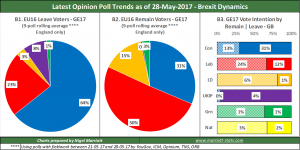 Chart B3 shows the breakdown of each party today into its Remain & Leave voters but note that the numbers on the chart represent the % of all GB voters that fall into that combination of party & referendum vote.  So the largest group of voters today are Conservative Leavers accounting for 31% of all voters in Britain.  This is followed by Labour Remainers (24%) and Conservative Remainers (13%).  One point to note is that Labour Leavers outnumber all UKIP voters so this would suggest that the Conservatives should try and direct their efforts at these voters given they have already captured the main chunk of UKIP voters.

Another point I find interesting is that around 30% of Labour, Green and Nationalist voters (lower for Lib Dems) say they voted Leave which suggests that any Anti-Brexit attack to make inroads into the Conservative Remain bloc runs the risk of losing voters within their own Leave bloc.  I would surmise that the remaining Conservative Remainers nearly all fall into a referendum category that has been identified by myself and others, namely those who are sympathetic to the Leave argument but voted Remain because they were worried about the economic risks of leaving.  Unless the economic news turns sour, I do not see many more Conservative Remainers defecting.

Indeed chart B4 shows that whatever the Lib Dems have been doing in terms of targeting Conservative Remainers has achieved nothing so far.  Conservatives account for 30-33% of Remainers and this has been steady since February until recently.  However, the recent fall in Conservative Remainers has benefitted Labour not the Lib Dems.  The Lib Dems did improve their posture among Remainers for a while but since the election was called, they have gone into reverse along with the Greens and Nationalists and Remainers are shifting towards to Labour in considerable numbers and explains Labour’s recovery in the polls.  I suspect this is a result of planned tactical voting since in a majority of seats it is a straight Labour V Conservative fight and therefore Labour should be the main beneficiary of tactical voting in the aggregate. 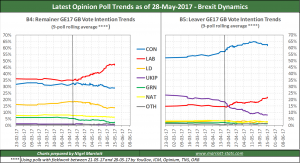 Interestingly, it appears that Labour’s initial Leavers gains came from ex-UKIP Leavers which is an important point to bear in mind since we now know that UKIP is only fielding 377 candidates in the election.  The question of what UKIP15 voters will do this time around is one that needs answering and my belief is that not all will switch to the Conservatives, some will switch to Labour.  I have not much commentary on this dynamic and it is worth keeping an eye on whether this continues.

The polls split current vote intentions by how people voted in 2015 which is what is shown in chart S2.  Continuing the theme of the Lib Dem/Conservative battle over Brexit, this shows that since 2015, 1.3% of CON15 voters have switched to the Lib Dems and presumably most of these were former Conservative Remainers.  At the same time, 1.5% of LD15 voters have switched to the Conservatives and presumably these were Lib Dem Leavers.  So the nett swing or switching between Conservatives and Lib Dems is +0.2% (=1.5%-1.3%) which is what is shown in table S3.  The same process can be repeated for all party combinations and what is clear is that the largest change by far has been the switching of UKIP15 voters to the Conservatives reflecting what we see in chart B5 above. 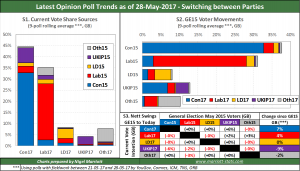 Chart S1 is the same data as S2 but the blocks have been rearranged into current voting intentions.  This clearly shows that the Conservatives are attracting Labour voters as well as UKIP voters with a nett swing of 1%.  I would surmise that the Labour to Conservative switchers are the voters that UKIP set out to capture but since UKIP’s failure to win the Stoke Central by-election, they have now plumped for Theresa May’s party.  At the same time, Labour has stopped its leakage of voters to UKIP reflecting the return of some Leavers to Labour and there is actually now a nett swing from UKIP to Labour.

For Labour, their net gains from UKIP more or less cancel out their net losses to the Conservatives.  Where Labour are now making net gains has been among Other voters which is a mixture of Greens and Nationalists.  It is hard to provide further clarity on this point since polls struggle to pick up many Green voters and they tend to be of British voters which means that Plaid Cymru voters are also hard to pick up.  But what evidence is available suggests that Greens & Plaid voters are switching to Labour which may reflect tactical voting intentions.  The situation with the SNP is still hard to read but some may be switching to Labour as well.

The Lib Dems should be concerned by table S3 as previously their gains were coming from Labour with a clear nett swing between the parties of up to +3% at one point.  At the moment it is only +0.2% and the trends in chart B4 above suggests that this could also disappear.  Chart S3 tells me that the Lib Dems now run a real risk of making a net loss of seats in the election.

All pollsters break down their results by region but they don’t use the same regional definitions.  In some cases, their regional breakdowns result in very small samples that would be too small to draw conclusions on.  However, by taking the median across multiple polls and using some simple statistical modelling, it is possible to arrive at more robust estimates of how the parties votes have changed within each region.  Every now and again, a poll for a specific region is published and that allows me to crosscheck my estimates.  At the same time, I include the regional-specific polls in regional medians but I give them more weight than the regional breakdowns from national polls. 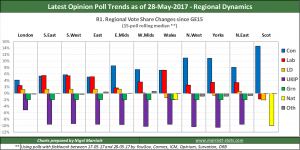 Readers of my previous posts will be aware that I was using a rolling average rather than a regional median.  I decided to make a change as I was concerned that some very extreme regional crossbreaks were occurring which could distort the rolling average even though I was averaging over 15 polls.  This has a knock on effect on reducing the projected Conservative majority but I am more comfortable now I have made this change.

Another change I have made is the result of the first poll published by Lord Ashcroft in this campaign.  Most polls that are published survey 1,000 to 2,000 respondents but the new Ashcroft poll is a monster with 40,329 respondents!  Ashcroft intends to publish updates during the campaign and this has prompted me to change my weighting scheme for chart R1 since his poll allows for a much larger sample within each region.  From now on, crossbreaks in standard polls will be have a weight of 1, regionally specific polls such as the Welsh Barometer poll will have a weight of 4 and the Ashcroft regional breakdowns will have a weight of 6.  The weights are basically in line with the square root rule of sampling.

For me, chart R1 is the most interesting chart in this post.   To me, the dynamics of the election campaign have now clarified themselves and can be summarised as follows:

My belief is that the Lib Dems are doing best in major cities and university towns and that their vote is inversely correlated with distance from London.  These areas had the strongest Remain vote and clearly the Lib Dems are appealing to the Anti-Brexit vote but nowhere near the scale they might have hoped for.

For the Conservatives, chart R1 is pretty much perfect for them.  They are making reasonable gains in their heartlands that match Labour’s gains and making significant gains where they need to.  The most spectacular gains have come in the North & Scotland, both areas where they have been weak in the past.  In Scotland, their vote share will be their highest since 1983.

"I mentioned it once but I think I got away with it!" Basil Fawlty didn't get away with it in … END_OF_DOCUMENT_TOKEN_TO_BE_REPLACED

May 2022 was the 5th warmest May on record in the UK.  Whilst temperatures are rising as the days … END_OF_DOCUMENT_TOKEN_TO_BE_REPLACED

Whilst COVID19 was ravaging the world in 2020 & 2021, I felt there was little point in updating … END_OF_DOCUMENT_TOKEN_TO_BE_REPLACED