Labour continues to hold a small lead over the Conservatives as the nation entered the Christmas holidays.  There is evidence of some voter movement towards UKIP which indicates that their true national level is around 4% or 5% and their General Election performance was distorted by so many of their candidates standing down.

Chart G1 shows the Conservatives have slipped back since the 2017 election and Labour now has a lead of 1% in Great Britain.  The most striking thing about G1 is the quite extraordinary recovery in the Labour vote from mid-April 2017 when the election was called.  Understanding why this happened is key to making sense of the 2017 election and what is likely to happen next.  I have to say that from what I have read from political commentators, no-one has yet made sense of this dramatic surge.  For myself, I keep coming back to a comment I made to my wife (who is American) that the election was starting to remind me of the Democrats primary battle in 2016 between Hillary Clinton and Bernie Sanders and I do feel that the two elections share a similar dynamic. 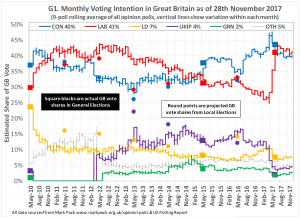 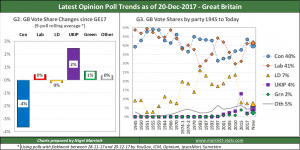 The 2017 General Election saw the elimination of class as a predictor of voting intentions but age become a more distinct differentiator between the parties.  I will keep an eye on demographics in the polls and at some point I will update this section.  I will also make an estimate of how national shares would be different if 16 & 17 year olds were entitled to vote.

After an entire meteorological year where the temperature above the median for ever single month, … END_OF_DOCUMENT_TOKEN_TO_BE_REPLACED

Sir Donald Bradman is the GOAT (Greatest of All Time) of sporting GOATs.  All cricket lovers accept … END_OF_DOCUMENT_TOKEN_TO_BE_REPLACED