For my latest Opinion Poll Tracker, I will explore 4 points currently being debated by political pundits.

I apologise for not updating this tracker for the last 2 months.  To be honest, there was not much happening so I have now decided to update this every quarter unless there is an event that calls for more frequent updates.

Chart G1 shows the Conservatives are making a small recovery from their post GE17 dip and have now opened a small lead over Labour.  Otherwise, there has not been any dramatic shifts in public opinion.  Note that G1 now includes the 1st five months of 2010 so that the polling volatility of the 2010 general election campaign can be seen. 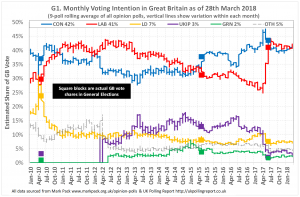 Labour have been slipping in recent months but are still ahead slightly from where they were in the 2017 general election as shown in chart G2.  Chart G3 shows that the return to a 2-party system is still holding.

One point to be aware of is that the Conservatives current lead over Labour would be higher if it were not for a strong outlier from Survation.  Survation were the most accurate pollster in the 2017 general election so it is natural to ask who is right, Survation or the other pollsters?  The 9 polls making up my latest rolling average are listed below (only CON & LAB votes shown)

I have written a separate post to answer the question “who is the best pollster?” so if you read that, you will be able to make up your own mind.  For myself, this is why I focus on 9 poll rolling averages and I prefer to go with those figures rather than looking at individual polls.

The word “youthquake” is now associated with the 2017 general election.  This refers to two phenomena, young people turning out to vote in higher numbers than ever before and young people switching to Labour in droves.  These were first observed both from the results and from opinion polls published at the time.  However, the polls were standard quick turnaround polls and all general elections are followed by an in-depth survey undertaken by the British Election Study which is widely regarded as a gold standard survey based on sound statistical principles.

The results of the BES study were published in January and much to everyone’s surprise, they showed there had been no youthquake when it come to youth turnout.  Instead turnout had increased most markedly among 25 to 44 age range and may even have dropped a little among the 18 to 20 age group.  Matt Singh wrote an excellent summary of the BES analysis which is worth reading.  This conclusion surprised a number of people who found this hard to believe and so BES issued another statement in response to some criticisms.  Recently, BES has been backed up by a NATCEN study.

Polling is not the only way to test the youthquake hypothesis.  The other way is to look at the actual election results at seat level and correlate changes from 2015 with official statistics on the age profile of the seat.  The advantage of this approach is that we are using actual data but the disadvantage is that we are not looking at individual voters.  Again Matt Singh has undertaken such an analysis which proved to his satisfaction that the increase in turnout came from 25-44 year olds but I also done my own analysis using a method that I call DECILE ANALYSIS.

The first step in decile analysis is to rank the 573 constituencies of England & Wales in order by the % of voting age adults who were aged 18 to 24 as of 2016.  Seat level data comes from 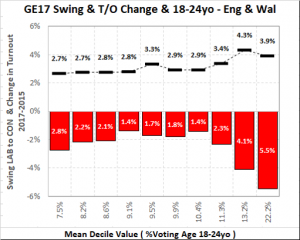 the House of Parliament Research department and whilst most data comes from the 2011 census and therefore could be out of date, some data such as age profiles are updated more regularly.  Note I have focused on England & Wales only, partly because updates to the Scottish data is done by separate government agencies who follow different timetables and partly because the Scottish political scene follows trends that differ significantly from England and Wales.  Indeed turnout in Scotland fell in 2017 instead of increasing as it did in England & Wales. 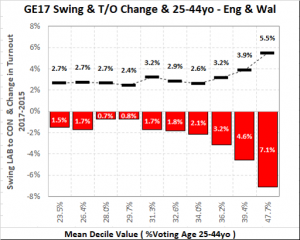 time, these two deciles also saw above average increases in turnout (turnout rose by 3.2 points across England & Wales).  Taken together, this chart seems to support the youthquake hypothesis though the impact is largely confined to 1 in 5 seats rather than it being a nationwide effect.  However, if I repeat my decile analysis but this time sorting seats by the % of voting age aged 25-44 instead, the resulting chart shows a much stronger “middleagequake” effect which is consistent with the BES survey.

It is important to note that I am making the assumption that the larger swing and change in turnout in the top deciles is due to the demographic being studied i.e. it really is 18-24 year olds driving these changes.  It is possible that in fact some other demographic is actually driving what happens in the top deciles but that demographic is correlated with 18-24 year olds and therefore gives a misleading impression that 18-24 year olds are responsible.  For example, students are most likely to be 18-24 and so it could be seats with universities that drive these effects rather than 18-24 year olds in general.  Disentangling the various effects requires more work and I intend to summarise my results in a later post but so far, everything I have seen supports both the BES & Matt Singh’s conclusions that there probably was not a youthquake, especially with turnout, but there was a middleagequake. 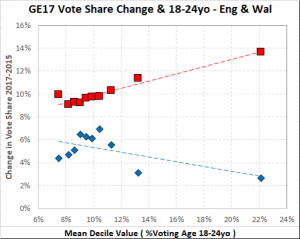 7 year olds been allowed to vote.  To answer this question, I produced the next chart which uses the 18-24 year old deciles as before but this time the chart shows the change in the Labour and Conservative vote share.  Remember the calculation of swing is based on these two figures and this chart shows that the change in the Labour vote share was strongly correlated with the presence of 18-24 year olds.  In the top decile, the Labour vote went up by 14 points whereas in the bottom decile it actually went up by 10 points though the fitted line suggests it should have gone up by 9 points instead.  Based on the fitted line, I observe that a 1 point increase in 18-24 year olds leads to a 0.3 point increase in the Labour vote, a figure I call Labour’s sensitivity to the youth vote.  For the Conservatives, their sensitivity to the youth vote is -0.2 points for every 1 point increase in 18-24yo but it is not as consistent as for Labour.  For completeness, the Lib Dem sensitivity is -0.1 points. 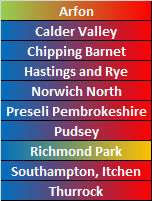 ain rather than a Conservative hold.

If I repeat this exercise for every seat, then 10 seats would change hands as listed in the table.  Labour would gain 9 seats, Lib Dems 1 seat, the Conservatives would lose 9 seats and Plaid Cymru would lose 1 seat.  At first, this does not appear to be a major change in the electoral fortunes of the parties but when we look at the re

vised national shares, the impact is more significant as this suggests that Labour and the Conservatives would be neck and neck in England & Wales rather than the 2.5 point lead the Conservatives actually had.  I arrived at these figures by taking a weighted average of the revised vote shares in each seat, weighted by the revised turnout figures.

This post serves as an introduction to my approach of decile analysis.  I have found this to be a very effective way of analysing election results and I intend to publish more posts in the future looking at the effect of other demographics.

After an entire meteorological year where the temperature above the median for ever single month, … END_OF_DOCUMENT_TOKEN_TO_BE_REPLACED

Sir Donald Bradman is the GOAT (Greatest of All Time) of sporting GOATs.  All cricket lovers accept … END_OF_DOCUMENT_TOKEN_TO_BE_REPLACED